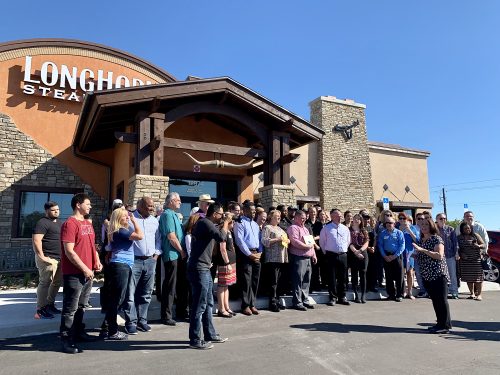 Kimberly Velez, right, speaks to folks gathered for the Jan. 28 grand opening ribbon-cutting at LongHorn Steakhouse in Riverview, at 12974 South U.S. Highway 301. Velez is the restaurant’s managing partner, and the ceremonial scissors belong to the Greater Riverview Chamber of Commerce.

A blessing and enthusiastic crowds marked the grand opening of LongHorn Steakhouse in Riverview, where community giveback was put on display with a $5,100 check for Forgotten Angels, a nonprofit serving children who age out of the foster care system.

“I have lived and worked primarily in this Riverview community for the past seven years, and I knew that we were going to be busy,” said Kimberly Velez, managing partner of the restaurant at 12974 U.S. 301 S. “What surprised me the most is how many people stopped by before we were open, telling us they were looking forward to us being here.”

To wit, “Over the past three days we hosted our friends and family event, and it really put our restaurant team to the test,” said Velez, speaking at the restaurant’s ribbon cutting, with the Greater Riverview Chamber of Commerce, held Jan. 28. 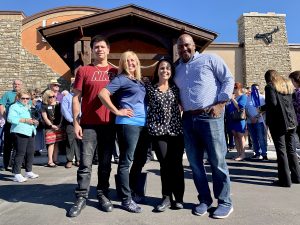 LINDA CHION KENNEY PHOTOS
From left, Cordero Johnson, Cindy Tilley, Kimberly Velez and David Tyler, executive director of the nonprofit Forgotten Angels. Tilley founded the organization and serves as its president. Velez is managing partner of LongHorn Steakhouse in Riverview, which donated $5,100 to Forgotten Angels, a group that serves teens and young adults who age out of the foster care system. Cordero benefits from the services and says Forgotten Angels, “makes miracles happen.”

With Riverview’s grand opening, Velez added, LongHorn Steakhouse “has opened more than 515 restaurants across 41 states,” including the Brandon location, at 1110 Causeway Blvd., where Velez worked previously as managing partner.

She noted her company’s “legendary, fresh, never frozen steak, chicken and fish” menu selections, and steaks that are “expertly grilled and boldly seasoned.”

Surplus food that isn’t served in the restaurant is donated to Tampa Bay Harvest, Velez said, noting the company’s give-back mission to the communities it serves.

“What they do for young men who have aged out of the foster care system is truly incredible,” Velez told the ribbon cutting audience, including chamber members and LongHorn employees. “And I do hope you will take some time and learn about them, because they do need the support of this great community to provide support to these young men, who are just put out on the street with no one to take care of them.”

Count among them 22-year-old Corderon Johnson, who was at the ribbon cutting with Cindy Tilley, founder of Forgotten Angels, and David Tyler, the nonprofit’s executive director. 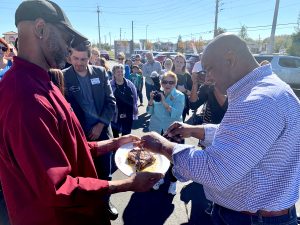 A signature steak gets a ceremonial cutting from David Tyler, executive director of Forgotten Angels, at the Jan. 28 grand opening ribbon-cutting for LongHorn Steakhouse in Riverivew, at 12974 U.S. 301 South.

Forgotten Angels sits on 12.5 acres, at 3604 Little Stearns Road. The group currently has housing for 11 young adults and seeks to add tiny houses to serve another 19. Plans are to find land to serve young women as well.

“There are no words,” Corderon said, for describing what Forgotten Angels’ support has meant to him. “They do more than they can for anyone who comes through their doors. They make miracles happen.”

Corderon said he came to Forgotten Angels after being kicked out of a foster home he shared with his siblings; when he needs to see his siblings, the nonprofit finds a way to make that happen.

Tilley founded Forgotten Angels, having never forgotten her own experiences, entering the foster care system in the fourth grade.

Tyler is friends with Quinton Aaron, the actor who portrayed Michael Oher (“Big Mike”) in the 2009 mega-hit film, “The Blind Side,” about a homeless and traumatized boy who became an All-American football player and first-round NFL draft pick, thanks to the help of a caring woman and her family. 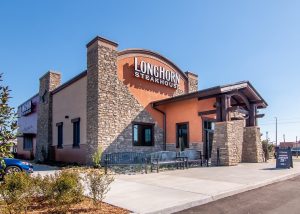 Tyler also is executive director of the Quinton Aaron Foundation, founded in 2006 “to provide hope and encouragement to children and students who are being bullied.”

Tyler praised LongHorn for its Forgotten Angels donation. “Whatever we get, it’s a blessing,” he said. “We have a caring community behind us, and they understand it takes a village to raise a child.”

The newly opened LongHorn, which sits in front of the Sprouts Farmers Market, serves lunch and dinner Sunday through Thursday (11 a.m. to 10 p.m.) and Friday and Saturday (11 a.m. to 11 p.m.), Velez said, with an “all day, every day happy hour” featuring $2.50 draft beer and some $5 drinks.

Among the most popular menu items are the Outlaw Ribeye, LongHorn Salmon and Parmesan Crusted Chicken, which Velez noted are “out of this world.”