Hot Dog University is the best

If you ever dreamed of owning a hot dog stand and wanted to learn everything there is to know about hot dogs, you should attend the Vienna Beef Hot Dog University. 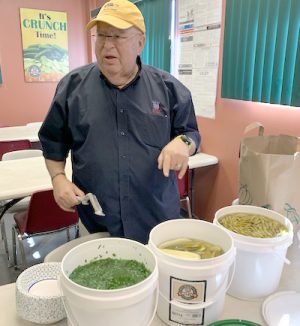 CARL MARIO NUDI PHOTOS
Mark Reitman, PHD, (Professor of Hot Dogs) and founder of Vienna Beef Hot Dog University, prepares the condiments for a lunch he and his students will prepare for about 70 employees of Chicago Pickle Company, 2650 Corporate Way, Palmetto, site of the new classroom where Hot Dog U classes are held.

This institute of “higher education” recently opened its new classrooms in a pickle factory just north of Palmetto.

“You’ll learn from the best,” said Mark Reitman, PHD, (Professor of Hot Dogs) and founder of Hot Dog University. “You’ll be factory trained by experienced people who have been in the business for many years.”

A class with six students eager to learn all about hot dogs and how to sell them was held last week at the Chicago Pickle Company, or Chipco, 2650 Corporate Way, Palmetto; it is one of the Vienna Beef factories that produce pickles and other condiments for the Chicago-based food company.

“This is going to be our first official class here in Palmetto, Florida,” Reitman said. “We’ve done about four or five classes in the past in Clearwater and in Boca Raton and in St. Petersburg, but they’ve always been in conference rooms at hotels, and this year Vienna Beef was kind enough to build the second story here at the Chicago Pickle Company plant.”

The students sat around the conference table with a binder-full of information and listened as Reitman presented additional information about hot dogs and how to prepare, market and sell them.

The Chicago native not only provided technical data, such as how hot the water should be to cook a hot dog or steam a bun, but he also offered words of wisdom from his many years of owning a hot dog business.

“Put yourself on the side of the counter as the customer,” Reitman said. “It’s always what the customer wants.”

The Hot Dog Stand course in Palmetto is one of two taught at Hot Dog University. The other is The Art of the Cart.

The difference is whether the entrepreneur wants to open a brick and mortar restaurant or run a hot dog cart business. 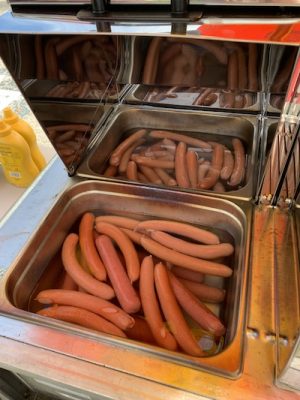 Reitman said both of the courses offer a lot of the same information, but they differ in what they teach about the information on the menu and the equipment used in a restaurant building compared to a steam cart that is used at street corner, special event or market.

In a restaurant, you may need a deep fryer and a grill, along with the steam tables, he said, whereas a street cart with an umbrella would be necessary for a non-building business.

Regardless of which course, a student also learns about licenses and permits, health regulations and food safety, naming your business, obtaining professional advice, such as a lawyer or accountant, and much more.

The students learned about Vienna Beef products, including the difference between its all-beef natural casing and skinless franks; other meat products, such as Italian beef and Polish sausage; and the specialty condiments needed for a famous Chicago-style hot dog.

There is a considerable hot dog culture in Chicago, and some Chicagoans are fanatical about their hot dogs. The traditional Chicago hot dog is made with specific ingredients applied to the dog in a specific order.

One would start with a steamed poppy seed bun with a natural casing frank steamed or cooked in hot water, which snaps when bitten into, followed in order with yellow mustard, neon-green relish, fresh chopped onions, two tomato wedges, a dill pickle spear, two sport peppers, and a dash of celery salt. 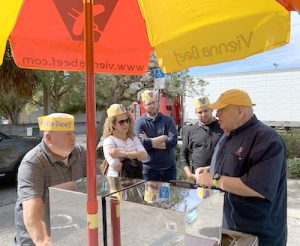 This method of dressing a hot dog has become known as “dragging it through the garden,” and Vienna Beef produces or supplies all of these products.

Student Pat Benedetto, who was born and raised in Chicago, said the combination of bun, meat, condiments, vegetables and seasoning come together to create the perfect taste. “And those steamed buns, they’re so pillowy,” added Benedetto, who was attending Hot Dog University for the second time.

He has lived in Florida since the 1980s and owns a construction industry business, but he always wanted to have a Chicago-style hot dog stand with a simple menu, “It’s something I always wanted to do,” Benedetto said. “I enjoy seeing people (enjoying their hot dogs).” Although he is still in negotiations for his location, he already has a named picked, Pat’s Red Hots.

Three of the other students still were not sure what the name of their restaurant will be. Sandra Rivera, Doug Walters and Angel Vergara attended Hot Dog University as representatives for their larger family business.

“This has been a dream of my father’s,” Rivera said. “He was from Chicago and always wanted a hot dog business.”

Walters, who worked at Costco’s before joining the family business, is married to Rivera’s sister, Monica Walters, and Vergara, a trained chef, is a cousin through marriage. 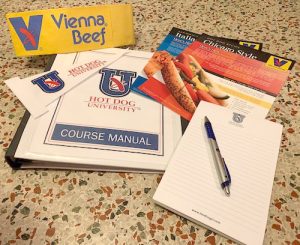 Rivera’s father, Hiram, has already purchased the building at 1113 W. State Road 436, Altamont Springs, which is now being remodeled as a carryout-only restaurant. There will be seating outside. “He wanted something to pass down to my sister and me and the family,” Rivera said.

Hoping to open by April or May, they are working on picking a name: “Maybe Second City Hot Dogs or Hiram’s Taste of Chicago,” Rivera added.

All of the future restaurant owners learned of the Hot Dog University online while doing research. “We knew we wanted to sell Vienna Beef products,” said Doug Walters.

For Walters, Hot Dog University was worth the drive from the Orlando area. “So far we’ve learned some neat ideas, some things we haven’t thought about,” he said. “Also, one big thing is the contact information Mark has.”

Reitman is passionate about sharing his hot dog knowledge. He sold his first hot dog at the age of 8 in 1955 at the soda fountain in his father’s drug store.Then at 13 he started working at a Chicago food institution, Henry’s Hamburgers.

“I cut my teeth in fast-food back when I was in high school,” Reitman said. “And after graduating high school, I went off to Southern Illinois University, where for a few years I worked in a commissary where I cooked hot dogs and hamburgers and made shakes and malts and got a lot of training.

After graduating, he became a schoolteacher but always had to have a second job to supplement his income because “back then the salaries (for teachers) were very low,” he said. 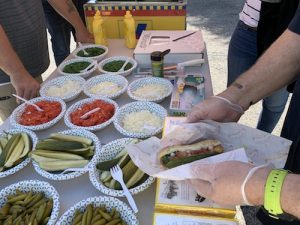 Mark Reitman, PHD, (Professor of Hot Dogs) and founder of Vienna Beef Hot Dog University, holds a Chicago-style hot dog after demonstrating to his students “how to run it through the garden” or the proper way to dress the frank.

“I ended up selling appliances and working for friends that had pizzerias and hot dog stands and got the bug to go into my own business,” Reitman said.

By this time the schoolteacher had moved from the Chicago area to become the first elementary school counselor in the Kenosha (Wisconsin) Unified School District.

But with the dream of owning his own business still burning, Reitman and his wife Nina purchased a hot dog cart in 2003, selling hot dogs at special events and, eventually, set up outside an outlet mall in Oshkosh, Wisc.

“We’d only go out there on Saturday and Sunday from 11 in the morning until 3, usually May through December,” Reitman said, “and we never had a day during those four hours that we sold fewer than 300 jumbo dogs and a hundred drinks, so it was like a thousand dollars in four hours, and we got to keep about 66 percent.”

After the third year, the mall built a food court, and the Reitmans had to either move their hot dog business inside at a high lease rate, plus work seven days a week, or stop selling outside the mall.

“We ended up leaving,” he said. “But during the three years that we were at outlet mall, people were constantly asking me how did I get into this business.

“I kept a list of people that had questioned us over the years, and I decided to open up a business called Hot Dog University where I trained them on doing the things that I was doing,” Reitman said. “The first year we started Hot Dog U was in 2006, and I only trained 18 people that year.”

But after local and national media picked up the story, more than 125 people signed up for classes the second year.

Officials at Vienna Beef took notice, and in 2009 Reitman partnered with the company and became a full-time employee.

He now holds classes in Chicago; Scottsdale, Ariz.; and Southern California, as well as Palmetto.

Austrian-Hungarian immigrants Emil Reichel and Samuel Ladany started the Vienna Sausage Manufacturing Company to showcase their Vienna all-beef frankfurter they had brought from Europe to visitors of the 1893 Columbian Exposition/World’s Fair in Chicago.

Over the years the company continued to grow and is now known as Vienna Beef.