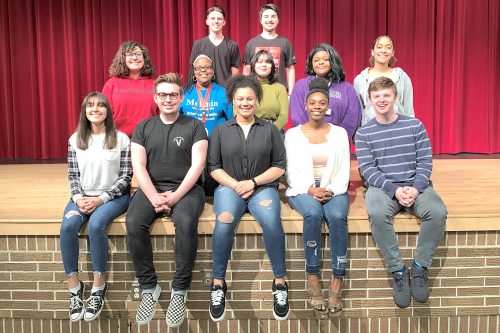 The East Bay High School Theatre Department will present Falling, a drama about autism and how it affects the immediate family, Feb. 12 to 14. The Deanna Jent play will take place at 7 p.m. at the school’s Kathryn Hill Auditorium, 7710 Big Bend Road, Gibsonton. The doors open at 6:30 p.m.

Due to its serious content, the performance is not intended for young audiences. Tickets are $5.

“Falling explores how autism affects the entire family dynamic,” said Krista Blanchette, East Bay High School’s Theatre Department head and the play’s director. “Eighteen-year-old Josh lives with his mother, father and 16-year-old year old sister. He has autism and struggles with school, coming of age and change. So when a grandmother whom he hasn’t seen in three years comes to visit, the change in his routine is felt by all.”

Falling is a story of how each member of a household is affected by autism and how the day-to-day operations of a family are drastically different from [those of] a typical family, Blanchette said.

“It’s an opportunity for people to gain a better understanding of autism and of what parents go through their entire lives,” she said.

The play, which is being produced with special arrangements by the Dramatists Play Service, hits close to home for Blanchette, who has two daughters, ages 7 and 10, with autism.

“I wanted the public to see how the family functions in contrast with a typical family,” she said. “It’s a story that needs to be told.”

“This is by far the smallest cast we’ve ever had,” Blanchette said. “We usually produce plays with much larger casts, but this show appealed to me because of its subject matter. I’ve always wanted to produce this play.”

Its serious nature provides unique acting opportunities for the students involved. “The challenge of portraying real-life situations involving family members living every day with a loved one with autism is enormous for our student actors,” Blanchette said.

For 17-year-old Grey Taylor, Blanchette’s son, the challenge is quite familiar. “The role is different than any [other] I’ve done,” the East Bay junior said. “But since my sisters have autism, this gives me the opportunity to put myself in their shoes and see life from their perspective.”

The East Bay Theatre has a full season of six different shows, including its Broadway musical revue, Showstoppers 4.0, to be presented March 6, and the much-loved musical “Mamma Mia” May 6 to 8.

A Leap of Kindness