Addison Davis, shown smiling on screen, as Hillsborough County School Board members announce he is their pick to succeed Jeff Eakins, the current school superintendent.

The newly approved chief of Hillsborough County schools said he will “be in the classrooms every single day as superintendent, from 7:30 in the morning till noon,” as he gets set to oversee the nation’s seventh-largest school district.

It’s a daunting task for Addison Davis, who made his pledge Jan. 21 at the specially called school board meeting, held to determine who will succeed superintendent Jeff Eakins, set to retire in June. Davis made his promise when asked about curriculum. 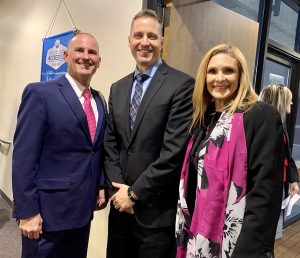 Classroom walk throughs will determine “how well our children are being impacted, are they academically engaged, are they exposed to rigorous content, are they understanding and taking ownership,” Davis, 44, said. The process, he added, will “help create actual feedback to every one of our teachers every single day to help them enhance their craft and create magic every day for our children.”

School board members are expected to officially confirm Davis’ appointment at their regularly scheduled Feb. 18 meeting.

Superintendents are appointed in 26 of Florida’s 67 public school districts.

Davis, born and raised in Northeast Florida, hails from Florida’s Clay County, where he was elected in 2016 to lead the state’s 23rd largest school district, enrolling 38,764 students. As a Republican candidate, he received 75 percent of the vote.

By comparison, Hillsborough is the state’s third-largest school district, enrolling roughly six times as many students as Clay (223,314) with roughly five times as many schools.

Growth is a factor in both counties, and of particular concern in south Hillsborough County, which faces a long-term debt of about $1 billion. To wit, Sumner High, built to accommodate 2,900 students, is the district’s largest high school, on track to open in Balm/Riverview in August. It’s set to open with grades 9 through 11 and to relieve overcrowding at Eisenhower and Shields middle schools with its 450 “Academy 2027” sixth-graders.

Hillsborough school officials say the unique academy buys them time to build a middle school in the area, where thousands of homes are under construction.

Overall, Hillsborough’s population growth is “projected at 1.3 percent annually through 2045, which will mean, on average, 22,000 persons per year,” according to a question asked of all superintendent candidates at the Jan. 21 meeting. The candidates were asked to assess their approach to this type of growth and how construction and rezoning would fit into that assessment.

Davis noted Clay County built a $25 million high school using impact fees and a reserve balance. According to recent news reports, the Clay County school board voted 5-0 to push a referendum to a 2020 vote, after attempting to force a special election last year to raise $318 million for school maintenance.

Meanwhile, in Hillsborough, Davis said he would use rezoning to fill available student stations and determine if expansion to existing facilities, including new classroom wings, would be a viable option as well.

“If we don’t have the availability to expand those structures we currently have, then we have got to find high impact areas where we are going to have to potentially build, and that’s going to cost a lot of money,” Davis added. “So my hope is the half-cent [sales tax levy] can help with that and leverage impact fees to make that happen.”

Hillsborough in 2019 approved a half-cent sales tax for 10 years, starting Jan. 1, earmarked for new schools, but also for repairs, maintenance, technology and security in existing schools. According to the school district’s web site, Hillsborough also receives one-eighth of a penny from the Hillsborough County sales tax, “resulting in less support than all our neighboring counties.” That tax, they added, “passed in 1996 as part of the Community Investment Tax,” is “woefully inadequate to cover current needs and growth.”

Growth has been a constant in Hillsborough County, most notably during the administration of superintendent Earl J. Lennard, who died in December. A lifelong Riverview area resident, Lennard entered the public school system as a first-grader at Palm River Elementary School and retired as its superintendent of schools in 2005. During Lennard’s nine-year tenure as superintendent, the district built and renovated more than 90 schools.

Now, it is up to Davis to take over for Eakins, a 31-year district employee, and lead the charge to tackle school district priorities with a roughly $3.3-billion budget. In addition to curriculum and growth, school board questions at the Jan. 21 selection meeting covered early learning and literacy, charter- and private-school competition, short- and long-term budget priorities and how to prevent struggling schools that require state control. (Hillsborough currently has eight schools in the state’s Turn-Around Option Plan.)

Before naming Davis its new superintendent, Melissa Snively, school board chair, took special notice of the pending vote. “Today we are poised to hire our new superintendent, from outside this district for the first time in 50 years,” she said. “It’s truly an historic day.”

For a transcript of the Jan. 21 superintendent selection meeting or to view the meeting itself, visit: http://schoolboard.hcpswebcasts.com.

For Davis’ background and accomplishments, visit the Clay County school district at https://www.oneclay.net/domain/86. 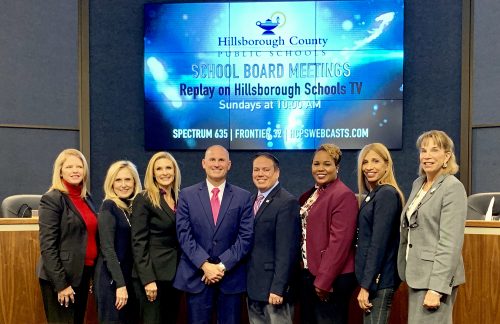