With houses selling briskly in Sun City Center, it is a real possibility that many of those buyers learned about the area’s unique lifestyle and quality of life at the Information Center, sponsored by the SCC Community Association at 901 Cherry Hills Drive. In making her 2019 report at the January board meeting, Janet Ditmore, administrator, once again presented some impressive numbers ­— 2,773 visitors, 1,500 of whom were exploring relocation options while 1,273 residents were seeking answers to questions. Volunteers manning the center always offer visitors a tour around the Central Campus, and 627 took them up on it. The phone lines were busy, as well, with 1,732 inquiries (787 outside; 945 local). 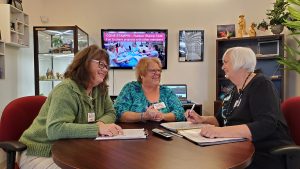 Those totals do not include several visits during the year by busloads from China, Japan, etc., visiting the U.S. to learn more about our senior communities. Ditmore is the point of contact for the groups and organizes the tours and discussions.

The center’s lifeblood is Ditmore’s team of 89 volunteers. “Our goal is to help with anything they can and to do it with a smile,” she said. She calls them the face of the community in interacting with out-of-town visitors, and they play an important role in helping new residents acclimate to their new homes. The center is staffed year-round, Monday through Friday, 10 a.m. to 4 p.m., and on Saturdays from September through May, 10:30 to 2:30 p.m. Some volunteers have a regular two-hour shift every week; some come in on an as-needed basis

Two of those volunteers, Brigitt Lewis and Carol Zeller, have been volunteering for the past four years. Both say they enjoy meeting the people eager to learn about Sun City Center and all the special things it offers. “It’s fun,” Lewis says, “to see everything we have through their eyes.” Zeller added, “Every Monday when I am on duty, I learn something new.”

The story of the SCC Community Association Information Center is an intriguing one. It started in 2003 as the brainchild of John Bowker. The first space was in the corner of the old town hall on the Central Campus. Quickly proving its value, in 2006 it moved to a larger space, a CA-owned, original Del Webb-built house at 1002 Cherry Hills Drive. It moved again in 2015 to its current location when the new building was included in the CA’s extensive building and expansion program.

The concept of a community where seniors could live an active lifestyle was in its infancy when Del Webb established Sun City Center in 1961. He developed only three communities —Arizona, California and Florida, but the concept caught on quickly and 55+ communities are now all over the country. Some built by Pulte Homes even bear the Del Webb/Sun City names since Pulte bought the right to use them as a brand a few years ago.

Ditmore said they are always looking for cheery volunteers, and she can be reached by email: jandit912@gmail.com. The Information Center phone number is 813-633-4670.