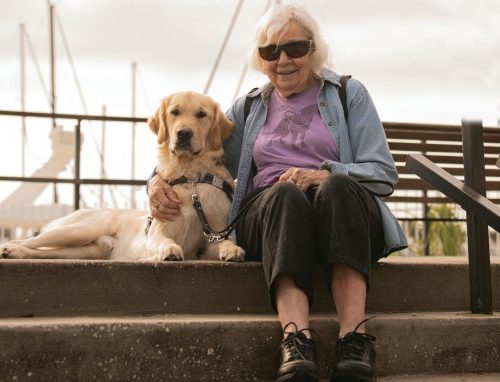 SOUTHEASTERN GUIDE DOG PHOTO
Alice Boose and Farwell, a 22-month-old golden retriever, sit for their formal portrait before their graduating as a team and heading off for a new life together in Sun City Center.

When Alice Boose began volunteering for Southeastern Guide Dogs in the early ‘90s, her efforts were made to help brighten the lives of others. Her own mother, Belle Reddick, had lost her vision, and Boose wanted to make a difference for others who’d lost their sight.

Little did she know at the time that one day she, too, would experience darkness and need a bit of help to brighten her own.

On Jan. 24, Boose and fellow members of Southeastern Guide Dogs’ Class 286 graduated from the school’s on-campus training program. As students, they each learned over three weeks of living with their assigned, fully trained guide dog how their lives would be forever transformed. The dogs were carefully matched by trainers to each person’s pace, pull (tolerance), personality and lifestyle. 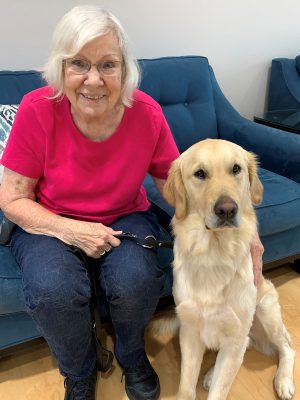 LOIS KINDLE PHOTO
Alice Boose and her new guide dog, Farwell, are shown together at the Barpal-Hirst Center on the Southeastern Guide Dogs campus during Boose’s three weeks of on-site training with the dog before taking him home. Farwell will give freedom and independence to the Sun City Center resident, who is legally blind.

“This is the culmination of both very hard work and pleasure,” Boose said as she took her turn to address the 200 guests gathered for the commencement ceremony at The Grove Restaurant in Lakewood Ranch. “I’m almost at a loss for words to tell you how much it means to me to have this dog.

“With God on my right, Farwell on my left and Southeastern Guide Dogs (only) 20 miles away, I know I’ll have a very bright future,” she said.

Already, she and the dog are inseparable and bonding as a team. Farwell’s job is to keep her safe and be her “eyes.”

“He’s perfect,” Boose said about her new guide dog. “He has a soft, gentle nature much like my own; he’s easy to control and very attentive to me.

“I can tell we’re going to be great together,” she continued. “It takes about six months to a year to establish that kind of bond, and I think we’ll make it in six.” 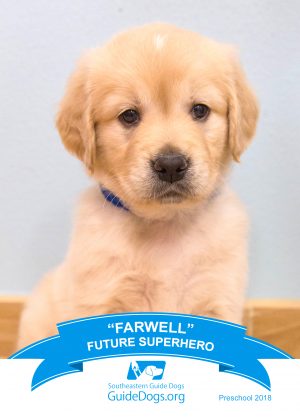 Boose is well-prepared to work with Farwell, given the fact that she raised seven puppies for Southeastern Guide Dogs from 2000 to 2012, finished four and sponsored 18. She even adopted Linnie, a smooth-coated Collie she raised back in the day, after the dog’s service for others ended. Linnie has been a family pet for about seven years.

In April 2019, Boose self-published “Hello, I Love You, Goodbye,” a compilation of short stories she wrote about her puppy-raising experiences. The book is available at www.amazon.com.

A call for help

Now 83, Boose was diagnosed with macular degeneration in 1996, but the condition progressed very slowly, and she was able to keep volunteering at the school until 2012. She was forced to stop by her failing eyesight, she said.

“It was getting to the point I couldn’t see well enough to keep a puppy as safe as I should,” she said.

A couple of years ago, Boose realized she needed help to address her own safety.

“I walk alone a lot and had to give up my driver’s license,” she said. “I don’t see faces much anymore.”

She applied for a guide dog twice. The first time she was interviewed she couldn’t yet have a dog because of an upcoming surgery. She reapplied early last year and then went through the process just like any other applicant.

“I was overjoyed when I was called and told I was in the next class,” Boose said.

“We require applicants to be legally blind, trained in Orientation & Mobility (O&M), be physically able to work and control a dog, have the financial stability to care for a dog and a plan for use, as well as pass a criminal background check,” said Suzy Wilburn, Southeastern Guide Dog’s director of admissions and alumni support. “We also ask for three personal references and conduct an in-home interview with each qualifying applicant to ensure a safe and stable home environment for our dogs.”

Boose’s application wasn’t a given, but her past experience was a plus.

“Alice has been a remarkable volunteer for Southeastern Guide Dogs,” Wilburn said. “Her dedication (as a puppy raiser) is impressive.

“(She) still had to meet all the criteria for a guide dog in order to be considered, although knowing her dedication to our organization made helping her that much sweeter,” she said.