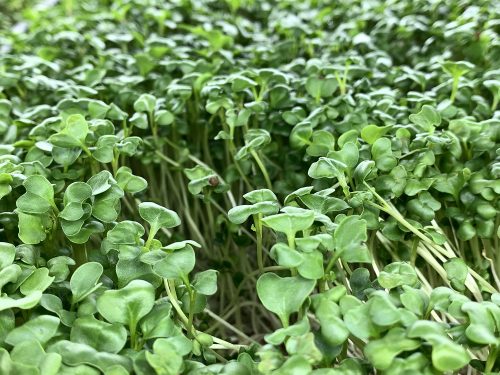 These broccoli microgreens are 40 to 50 times higher in nutritional value than the conventional form of broccoli.
LOIS KINDLE PHOTOS

Dario Rodriguez wants the whole world to know about the nutritive value of microgreens, but for now he’ll settle for South Shore and surrounding areas. 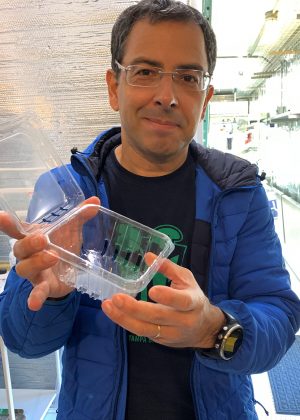 LOIS KINDLE PHOTOS
Eco-farmer Dario Rodriguez shows the container he uses to sell a variety of microgreens he sustainably grows at The Box Eco-Farm in Ruskin.

The owner of Sustainable Eco-System LLC began his quest to make organic microgreens more mainstream by establishing The Box Eco-Urban Farm and setting it up at the Circle Pond Tiny Home Community in Ruskin last December.

In The Box, which is a completely retrofitted shipping container, Rodriguez sustainably grows an assorted variety of herbs and microgreens, using a minimal amount of water, energy and soil.

“(The Box) allows for the maximum production of highly nutritional food in the smallest amount of space,” he said. “That’s what makes us eco-farmers.”

As part of his sustainability mission, Rodriguez sells only locally to individuals, restaurants, nutritionists and chefs. His service area is South Shore, Brandon and some parts of south Tampa.

“To avoid the use of fossil fuels, I would rather place another box in Wesley Chapel, for example, rather than make deliveries there,” said Rodriguez, 49. “We do not ship what we grow.” 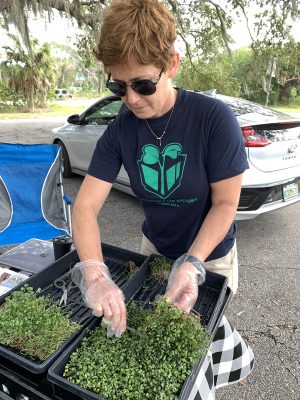 “When you buy microgreens from us, I like to tell you about their nutrients and health benefits, which have been acknowledged by the FDA,” he said.

The farmer also likes to tell you about their uses.

“Microgreens can be used in salads, sandwiches and as a topping for soups, pasta, eggs and rice,” he said. “You don’t cook them; they’re tender without heat.”

Although Rodriguez and The Box are new to the area, he already has many satisfied customers.

“I bought four boxes last week: salad mix, broccoli, arugula and radish,” said Dee Hood of Ruskin. “I use them on salads, and they’re so good, I just cut and eat them on their own.

“My teenage granddaughter and her boyfriend had some for lunch and loved them,” Hood continued. “I knew they were good for you, but I had no idea they would taste so good.” 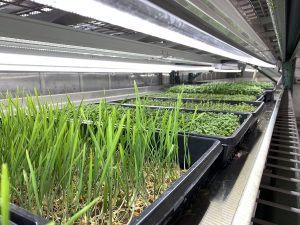 Wheat grass, foreground is one of many microgreens Rodriguez currently grows in The Box.

Rodriguez uses high density seeds in an organic growing medium like jute. In The Box, he’s able to control all of the production parameters: temperature, air flow and the humidity content of the air. The urban farm has a capacity of 720 10-inch by 20-inch trays of microgreens.

Rodriguez and his family moved to Ruskin from Argentina in 2016, when one of his three daughters began studying international business at the University of Tampa.

“We came as a two-year adventure,” said Rodriguez, who earned a master’s degree in global sustainability in 2018 from the University of South Florida. “But we’ve been here almost four years now, so we’ve decided to stay.”

He has invested $124,000 thus far between the Ruskin location and another at Fat Beet Farm in Oldsmar, where he grows mushrooms. 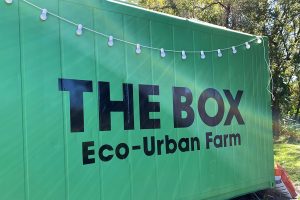 This is the completely retrofitted shipping container Rodriguez located at the Circle Pond Tiny Home Community in Ruskin to grow his microgreens. The Box allows him to produce the maximum amount of highly nutritional food in the smallest amount of space.

Rodriguez sells his microgreens for $3 per box, which is well below what you’d pay at a commercial establishment, and because they’re grown in an organic medium you can harvest as needed and they last longer.

Every Friday, you can find him set up at the Firehouse Cultural Center from 11 a.m. to 2 p.m. Microgreens can be preordered, paid for and picked up there. To do so, call 813-416-5444, email sustainableecosystems@gmail.com or visit www.sustainablemicrogreens.net.