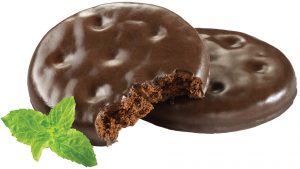 tarting Feb. 14, area Girl Scouts will be setting up tables in front of grocery stores and other local businesses to sell America’s favorite sweet tooth treat.

The public will be asked to support the Girl Scouts by purchasing a box or two or more of the all-time favorite cookie, Thin Mints, or try out this year’s new variety, Lemon-Ups, or any one of the other 10 varieties.

“All of the money stays local,” said Stephanie Klosterman, service unit manager for the Girl Scout Gulf Coast Council troops north of the Manatee River. “All of the proceeds from the boxes that the girls sell stay local.

“So if (the money is) not going to the troop, it’s going to our council, which funds our camps and activities that the council provides,” said Klosterman, who also is the leader of Troop 561 and co-leader of Troop 115. “I think that [it’s] really important for people to understand this.” 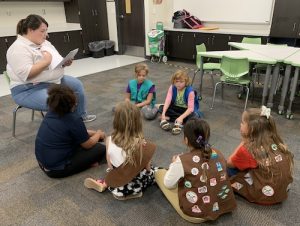 CARL MARIO NUDI PHOTOS
Girl Scout Troop 561 leader, Stephanie Klosterman, left, was a Girl Scout most of her life, starting when she was in first grade. Klosterman now is the leader of Troop 561, and co-leader of Troop 115. Here she is planning for the cookie sales campaign with her troop recently during a meeting.

Along with raising funds for their troop activities, the young Girl Scouts learn important leadership and financial skills through selling cookies.

The local council, headquartered in Sarasota, covers a 10-county area, including Manatee County, and nearly 6,000 girls in grades K-12.

There also are more than 2,700 adult leaders and volunteers working with the girls.

The money the girls raise through cookie sales not only funds the trips and activities, such as camping and community action projects, but also helps offset other costs.

“We try to do as little out-of-pocket from the parents as possible,” Klosterman said. “When I hear about some of the costs for Boy Scouts, I’m like, wow, really, because my girls are earning that money themselves. 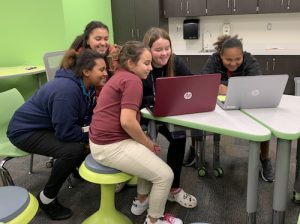 Girl Scouts Alexa Lane, 13, Yamari Zavala, 13, Kenzi Johnson, 12, Rayne Dridgars, 12, and Elisa Lane, 11, all members of Troop 115, review plans for their cruise to the Bahamas they are paying for with proceeds from their cookie sales.

“We charge dues for the year, and the parents may opt to buy the uniforms, but after that everything else is covered,” she said.

There is a one-time charge of $25 to join the Girl Scouts, and annual dues are $60 and, typically, that would be paid out of the cookie sales money, Klosterman said.

“So they become very self-sufficient with what they’ve earned,” she said.

Each Girl Scout decides what her goal for the number of boxes of cookies to sell will be for the year’s campaign.

Brownie Girl Scout Holly Tinley, a third grader at Williams Elementary School in Parrish, set her goal to sell 400-plus boxes of cookies this year.

“I like selling cookies because it’s fun,” said the 9-year-old, who is in her third year of Girl Scouts. “I got to do a booth with my friends at Publix.”

McGraw, with the Gulfcoast council, said the top selling variety of cookie was the Thin Mint. 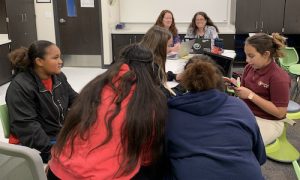 Lillie Hirsch, Girl Scout Troop 115 leader, left, and Charlotte Bethany, co-leader, watch in the background as the girls in their troop discuss the cookie sales campaign that starts Feb. 14.

The Trefoil is the oldest variety sold.

“It’s a shortbread cookie in the shape of the Girl Scout symbol,” McGraw said. “It seems to hold steady at 7-10 percent of total sales each year.

“It’s the closest to the original recipe baked in someone’s house in 1917 when the first box was sold,” she said.

Although the cookie campaign starts on Feb. 14 with the Girl Scouts setting up tables outside area businesses or going door-to-door in their neighborhoods, pre-sales have been going on since December.

“We want to make sure girls are part of the program, so we started a new tech system where each girl sets up an online order store,” McGraw said. “The customer can pay for shipping or have the Girl Scout deliver it.

“A lot of times people don’t have cash when at the grocery store, so this is convenient,” she said. “They can go to the site with a credit card, and the cookies will arrive in 4-5 days.”

The 17 girls in Klosterman’s Troop 561, who are in kindergarten through fifth grade, have been planning their cookie sales campaign for months and have decided to spend their proceeds on a camping trip to Epcot Center at Disney World.

“For years my girls had asked to go to Disney, and I always thought it was going to be way too much money,” Klosterman said. “Well, then last year and the year before my girls sold so many cookies, I thought, ‘You know what, this isn’t so scary; we just may be able to do Disney.’”

“So we actually are going to do Disney’s Youth Education Program,” she said. “They get a behind-the-scenes tour of Epcot, and they’re camping at Fort Wilderness campground for two nights.”

But the Girl Scouts program is a lot more than only selling cookies.

All the activities that Girl Scouts do center around four objectives, working on STEM (Science, Technology, Engineering, and Math) projects, the outdoors, developing life skills and entrepreneurship.

There are six levels of membership in Girl Scouts. Daisies are in kindergarten and first grade; Brownies are in second and third grades; Juniors in fourth and fifth; Cadettes, sixth through eighth; Seniors, ninth and 10th; and Ambassadors, 11th and 12th.

They progress through the levels as they age and earn appropriate badges and patches at each step.

“Everything that the girls do, no matter what level, is considered progression,” Klosterman said. “A good example is a first aid badge.

A Journey is a series of badges with a unified theme. The Girl Scout also has to do a Take Action project in her Journey.

Journey projects typically are done as a troop, Klosterman said.

As the Girl Scout progresses through the different levels, she also can earn a Bronze Award, a Silver Award and a Gold Award.

These are the highest honors a Girl Scout can earn.

A Girl Scout “might plant a community garden at (her) school or inspire others to eat healthy foods for (her) Bronze, advocate for animal rights for (her) Silver or build a career network that encourages girls to become scientists and engineers for (her) Gold,” according to the local council’s website.

Juliette Gordon Low founded the Girl Scout movement in her hometown of Savannah, Ga., in 1912, after meeting Robert Baden-Powell, who had started the Boy Scout organization in England.

Like many other Girl Scout leaders, Klosterman was a Girl Scout most of her life.

“I was a Girl Scout from first grade through high school,” she said, “I didn’t necessarily have a troop in high school, but I was an individual, and I worked at the Girl Scout camp and definitely was involved.”

Klosterman attended the University of South Florida in Tampa and USF Sarasota-Manatee, where she earned a degree in hospitality management.

She got back into the Girl Scout movement about nine years ago when a friend asked her to help co-lead a troop.

“I said I don’t have a girl, but I’ll be happy to help,” said Klosterman, who lives in Copperstone in Parrish with her husband Jason and 3-year-old son, Joshua.

After about a year, the friend’s daughter lost interest in Girl Scouts, so Klosterman started her own troop, which meets at the Barbara Harvey Elementary School on Moccasin Wallow Road.

Besides being a wife, mother and Girl Scout leader, Klosterman also works as an accountant at Palm Aire Country Club.

“I’ve been back with Girl Scouts nine years, and I love it,” she said. “Just watching the girls and how they learn and grow to me is amazing, and that’s why I continue to do it.”

For more information about Girl Scouts and its cookie sales program, visit the Girl Scouts of Gulfcoast Florida website at www.gsgcf.org.