They call it “clicks-to-bricks,” the movement from online selling to brick-and-mortar storefronts, which is exactly how Partyrific took root in Riverview, thanks to the efforts of a former accountant who sells party goods on Etsy.

At a ribbon-cutting Jan. 21, Greater Riverview Chamber of Commerce members celebrated the October opening of Partyrific, at 13159 U.S. 301 South with Cassandra and John Hansell. 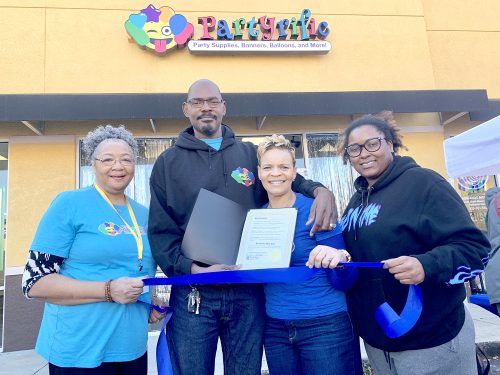 Billed to sell, “party supplies, banners, balloons and more,” Partyrific is not a franchise but, rather, a business that grew organically from two online stores Cassandra Hansell started on Esty, an online marketplace for handmade items, vintage goods and craft supplies.

Launched in 2014, Cassandra’s first Etsy store, UR Envited, features 348 items sold in 10 categories, including cake toppers, cupcake toppers, party straws, party supplies and banners. As of Jan. 23, there were 21,980 sales and 1,362 admirers.

In 2016, Cassandra opened her second store, UR Envited Too, “and dedicated it to my husband,” she said. It features 857 items sold in 16 categories, including balloons, garlands, confetti and custom banners. As of Jan. 23, there were 43,783 sales and 2,593 admirers.

With a focus on personalization, custom orders are accepted at both online stores and at Partyrific in Riverview.

Cassandra said she’s always had an interest in getting the party started, as the go-to person her friends would call when they needed help to plan their celebrations.

She opened her first Etsy store not knowing quite what to expect. As it grew, her husband stepped up to help when he was home from his job driving a truck.

“It was fun packing, stringing, cutting and transporting items to the post office,” he said. “Finally it got to the point where I didn’t want to drive a truck anymore, and [Cassandra] started UR Envited Too for me.” 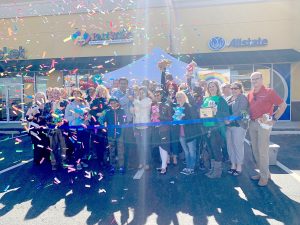 The sun’s rays highlight the well-attended Riverview chamber ribbon-cutting for Partyrific in Riverview, open since October at 13159 South U.S. Highway 301.

Her husband’s store “took off with a bang, better than my store,” Cassandra said. “For his store I used a different font and there’s more variety.”

Now, there’s physical space to account for, as well, at a store whose blended name reflects a takeoff of the word “terrific.”

According to a National Public Radio report in September, while e-commerce set out to change the way people shop, people who run online stores are increasingly “opening up physical stores as a way to attract more sales.”

In reporting on “clicks and bricks,” the Wall Street Journal notes in a Jan. 24, article that “pure internet stores get a lot of attention, but net retailers that have one foot in the old world may have the best of both worlds.”

The Hansells are counting on it, with a physical store to complement their Etsy endeavors, with online and custom orders accepted at both www.Etsy.com and www.partyrificfl.com. (For Etsy searches, use “UREnvited” and “UREnvitedToo”).

But another reason for opening Partyrific had a lot to do with a void in the community, Cassandra said, “because we don’t have a party store out here in Riverview, and I hated having to drive into Brandon when I needed party supplies.”

As for John, he never imagined owning a store, “but then it just started, and things started falling into place.”

As for what it takes to launch a successful business, be it online or in physical space or both, Cassandra offers her best advice, based on her five years as a crafts-minded entrepreneur.

“You never really know what happens, where the road will take you,” she said. “Just follow your dreams and work hard. And never give up.”