Home News Local honey is all the buzz
News

Local honey is all the buzz

Ruskin resident Bill Bowell learned about bee keeping from a guy he went to church with in Vermont back in the early ’80s. The man was diagnosed with terminal cancer and left Bowell his bees and equipment when he died. 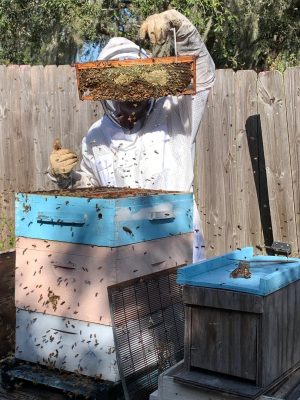 LOIS KINDLE PHOTOS
Beekeeper Bill Bowell pulls a honey frame from a hive at his home in Ruskin so the bees could be photographed. Normally he uses smoke to sedate them before doing so.

“But before he passed, he taught me everything he knew,” said Bowell, a former Navy Seabee who served from 1977 to 1983.

Over the years since, the now 60-year-old kept bees and held a series of labor jobs to support his family. Bowell moved to Florida in 2004 to help his father, who was in poor health. He used to trim palm trees by hand but had to stop after he suffered a heart attack two years ago.

In 1995, Bowell was diagnosed with retinitis pigmentosa, which, ultimately, left him legally blind, but that doesn’t stop him from working with his bees. It’s a hobby he truly enjoys.

“Bees are amazing little critters,” said Bowell, who is registered as a Florida beekeeper. “They just need help once in a while. It’s very relaxing watching them build something so unique and make a product that’s so beneficial to us,” Bowell said. “We sell honey with the comb, when available, liquid honey and flavored, creamed honeys.

“We get lots of good feedback from our customers on allergy reduction and other health benefits of our honey,” he said.

Either weekly or biweekly, Bowell and his Uncle Lou tend about 70 hives located in the woods and various other locations throughout South Shore, and he has four hives at his home at 2216 Lloyd Drive in Ruskin. The beekeeper also performs swarm removals. 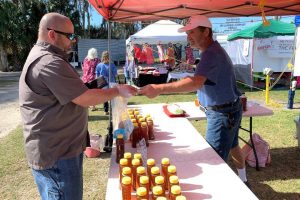 LOIS KINDLE PHOTO
Beekeeper Bill Bowell, right, sells a two-pound jar of his Mr. B’s raw honey to Jason Francis, of Lithia, at the monthly farmer’s market at the Ruskin Drive-in. Bowell is there the last Saturday of the month from 9 a.m. to 2 p.m.

“Bees must be kept fed with nectar, flowers and natural sugar and have a water source, but they pretty much take care of themselves,” Bowell said. “We harvest honey three times per year: orange blossom in the mid to late spring, wildflower in the summer and Brazilian pepper in the fall, usually around mid November.

“Once in a while, if we’re lucky, we get black mangrove honey, which has a clear look and salty taste,” he added. “Brazilian pepper honey has a yellow tinge and a bit of a pepper taste; orange blossom is orange and sweet; and wildflower varies in color and sweetness, depending on the flowers (frequented by the bees).

Mr. B’s honeys are sold in one-, two- and three-pound jars the last Saturday of the month from 9 a.m. to 2 p.m. at the Ruskin Drive-in Flea Market. Gallons can be special ordered.

Bowell also attends local events with his wife Carol and sells roadside at Universal Drive and U.S. 41 a couple days per week. Honey can also be picked up at Bowell’s home any day of the week by calling 813-431-7594 in advance to ensure someone will be there. 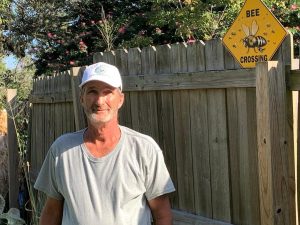 Bill Bowell is shown at his home in Ruskin, where he keeps four hives behind the fence pictured. The 60-year-old former Navy Seabee and his uncle also work hives scattered throughout South Shore.