With months to go before the grand opening of Jule F. Sumner High School in Riverview, principal Dave Brown has announced the school’s mascot, colors and remaining application dates for “Academy 2027,” a one-of-a-kind program for sixth-graders in Hillsborough County public schools. 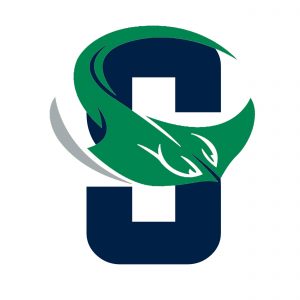 Sumner High School Principal Dave Brown said this design “seems to be the most popular,” as he announces the new school’s mascot (Stingray) and colors (victory blue, Kelly green and silver). Sumner is set to open in August as the Hillsborough County School District’s 28th comprehensive high school.

Chosen Sumner colors are “victory blue” (described as “a dark, shaded concord blue-purple with a plum undertone) and “Kelly green” (a tone reminiscent of the lush, green Irish landscape and named for a common Irish family name). Silver as an accent rounds out the school’s color palette.

Students from East Bay and Lennard high schools — and from Barrington, Eisenhower and Shields middle schools — were given three mascots to choose from: Gators, Scorpions and Stingrays.

“When you become the 28th high school in a district, it becomes a little harder to come up with names,” Brown said. “We’re great with [what they’ve chosen]. We’ve already come up with few designs and one that seems to be the most popular.”

Brown said school color choices included “orange with a kind of navy blue, like the Syracuse/Auburn colors, and brown and orange, like the Cleveland Browns.”

“We were trying to incorporate our feeder schools and Lennard is our main feeder,” Brown said. “Lennard has the burnt orange color, but [incoming Sumner students] wanted no part of that.”

Picking colors and a mascot is the first step in getting students involved in their new school, Brown added. Votes for the selections were “pretty overwhelming,” he said, “which shows we’re getting off on the right foot as we get set to unite that East Bay and Lennard group together.”

As Sumner high takes shape as the district’s largest high school, at 10650 County Road 672 (Balm Road), Brown said his next tasks are to hire coaches, department heads and teachers and also, to meet students selected for Academy 2027 at Sumner High School, created to relieve overcrowding at Eisenhower and Beth Shields middle schools.

Built to accommodate about 2,900 students in a 238,268-square-foot campus, Sumner is projected to open with about 1,800 students in grades 9 to 11. According to district policy, seniors are allowed to stay with their home schools when a new school opens in their attendance area, which means the new school in its first year does not have a senior class.

According to Brown, Academy 2027 is designed to fill an additional 450 seats, and the first round of choice ended in December with 369 applications. The second and third application periods open in April and July.

Sumner is set to enroll middle-school students only through 2027, which means 2020-21 sixth-graders will be allowed to attend Sumner through grade 12. “Hopefully, if all goes as planned, a new middle school will open to relieve Shields and Eisenhower by then,” Brown said.

Billed as a “first-of-its-kind” district program, Academy 2027 is set to apply for certification through the internationally recognized Cambridge Pathway, to become a Cambridge pre-AICE school. The international curriculum and examination system emphasizes broad and balanced study to ensure college-ready students.

“It’s fairly equivalent to the IB program,” said Brown, who as the charter principal of Strawberry Crest High School oversaw its International Baccalaureate Diploma program. “Students can earn a Bright Futures scholarship with an AICE diploma and 100 community service hours, regardless of SAT score or grade-point average.”

Academy 2027 is further designed to ensure sixth-graders are largely separated from high school students, with access to its state-of-the-art high school auditorium and athletic fields.

Brown said Academy 2027, like all district middle schools, is set to offer five sports seasons: baseball, soccer, flag football, volleyball and track and field. “We’ll open with intramural teams and starting in seventh grade, we’ll play other schools,” he added. “Having sixth-graders go out and play with teams that have seventh- and eighth-graders isn’t very fair or likely to have a lot of success. We don’t want anyone to get hurt.”

Students who applied to the academy by the Dec. 31 deadline will be notified of acceptance by mid-February; shortly after, Brown plans to meet with students [and] their parents. He said remaining spots will be filled as needed in spring and summer.

Brown added once coaches are hired, he will schedule community events to meet the coaches. “And when they finally give me the keys to the building, we’ll have some open houses and Saturday hours and let the public come in and see what their tax dollars bought.”