Actors with Parrish Playworks will perform the murder mystery play, Murder on the Moonshine Express, on railroad cars on a train trip from Parrish to Willow at the Florida Railroad Museum, 12210 83rd St. E., in Parrish.

The opening performance will be 6 p.m., Feb. 14, with shows continuing that weekend and the following two weekends.

“It’s Valentine’s Day, so this would make a wonderful date night,” Romant said.

Romant has known she wanted to be in theater since she was a young girl.

Her first show was in Greece when she was in a kindergarten class run by Orthodox nuns and played an angel in a Christmas play. 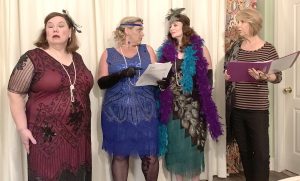 Debbie Davidson, left, as the character Mama Bear; Mandy Kersey, as Nora Rose; and Rachel Schuette, as Virginia, rehearse one of their scenes in the Parrish Playworks production of Murder on the Moonshine Express, with director Karen Romant, far right, checking their lines.

“Although I want to thank those nuns for giving me my first break, I can’t honestly say that’s when I knew I wanted to pursue a life in theater,” Romant said. “(But) the more (theater work) I did, especially in high school and college, the more I enjoyed the experience, so although the seed was planted way back then (in Greece), it took a long time to grow into more than just a dream.”

Murder on the Moonshine Express is about a Chicago gangster, Four-Finger Frankie,” who is on the lam after shooting a rival gang’s boss.

According to the promotional blurb for the play, “When things get too hot for Frankie Four-Fingers and his crew from the Chicago Outfit, they come down to Florida to cool off and get a piece of the local bootleg action.”

Things get hotter for Frankie when he runs up against Momma Bear and her daughter Ginny who run a boarding house in Willow. 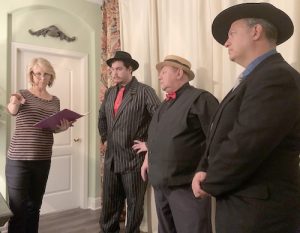 CARL MARIO NUDI PHOTOS
During rehearsal, Karen Romant, left, writer and director of the Parrish Playworks production, Murder on the Moonshine Express, gives some guidance to Jay Wright, playing Guido; Phil Montgomery, one of the two actors sharing the role of Four-Finger Frankie; and Keith Kessler, playing Dominic. Montgomery and Morgan Donaldson share the role of Frankie on alternating matinee and evening performances.

The madcap adventure during a train trip leads to a murder or two, or none — that is why it is called a mystery — that the audience traveling on the train has to solve.

“This is probably the tenth year that the murder mystery dinner train has been going on at the Florida Railroad Museum,” she said, “because the people before us did it for seven years, and this is our (Parrish Playworks) third year.”

Parrish Playworks Inc., a nonprofit production company, was started in 2015 as a result of an oral history project Romant helped write and produce.

In 2012 Romant was asked to help research and gather oral histories of some of the longtime residents of Parrish and Manatee County.

These oral histories evolved into a play called Red Rooster Tales: The Train to Yesterday,” a musical, folk-life play, first performed in 2013 at the Parrish YMCA.

Since its founding, Parrish Playworks has produced plays and performances throughout Manatee County, including venues such as historic schoolhouses, libraries, churches, barns, weddings, street markets, the Manatee County Fair, Riverwalk in Bradenton and several Florida Railroad Museum productions, such as the Murder Mystery Dinner Train and North Pole Express. 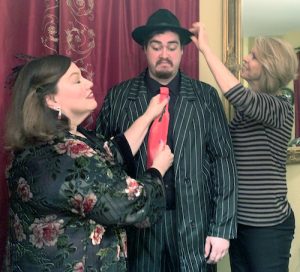 As director Karen Romant fixes Jay Wright’s hat, Debbie Davidson, left, who plays Mama Bear, straightens his tie (Wright plays Guido) before they rehearse one of their scenes in the Parrish Playworks production of Murder on the Moonshine Express.

Not counting her first acting role as an angel in her kindergarten Christmas play, Romant first got the theater bug when she had a part in her Guantanamo Bay, Cuba, high school plays.

“I was in Li’l Abner, which was actually a really fun musical, and Harvey, with a six-foot bunny, and Vacancy in Paradise, which is still in the Samuel French catalogue,” Romant recalled. “Then after high school I went to college, and I did a play, and I realized that’s what I really wanted to do.”

She attended Lynchburg College in Virginia for her first year of college because her father, who was in the United States Coast Guard, was stationed in Washington, D.C.

While at Lynchburg College, Romant performed in The Cave Dwellers, by William Saroyan.

“It was a conservative school, and I only lasted there a year because life was too exciting, so I moved to New York,” Romant said. “(Besides) I almost got kicked out because I was like the first one on campus to wear a miniskirt.” 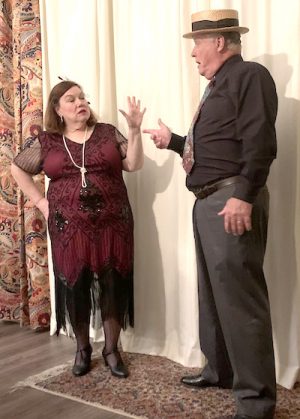 Debbie Davidson, left, who plays the character Mama Bear in the Parrish Playworks production of Murder on the Moonshine Express, and Morgan Donaldson, one of the two actors sharing the role of Four-Finger Frankie, rehearse one of their scenes. Donaldson and Phil Montgomery share the role of Frankie on alternating matinee and evening performances.

For a year, the young, aspiring model and actor pounded the pavement looking for her big break while working 9-to-5-type jobs. She did do a little bit of modeling.

Romant moved back to Washington and began working for a black theater troupe, working backstage as the only white person in the company.

“It was called The Polemic Theatre,” she said. “This was the late 60s, and we were protesting everything, and a lot of the people there were from Howard University because that’s the historically black college (in the area).”

When her father was transferred to Naples, Italy, Romant moved there for a few months before heading to Los Angeles to follow her dream and got involved with a theater group called The Firm with Players, later changing its name to the Stable Players, almost immediately.

“We did a lot of original plays,” Romant said. “It was a repertory group with the same actors.

“The director would write a play, and we would do it,” she said. “I learned the most about acting there.” 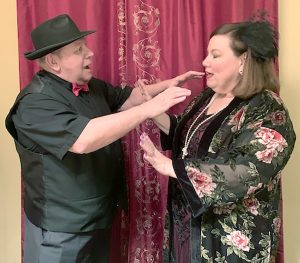 During rehearsal for the Parrish Playworks production of Murder on the Moonshine Express, Phil Montgomery, left, one of the two actors sharing the role of Four-Finger Frankie, gets ready to throw Debbie Davidson, who plays Mama Bear, from the train. Or does he?

After a couple of years in Los Angeles, acting in the theater group, going to casting calls and working regular jobs, Romant met and married Joe Romant, a Los Angeles Police Department officer and homicide detective.

“He was a cop on the beat, and I was working as a cocktail waitress doing theater at night,” Romant said. “We met and fell in love and married, and we stayed in LA for 25 years.”

While raising their three daughters, Amanda, Audra and Joanna, she returned to college, earning a bachelor’s degree in theater at California State-Northridge, where she graduated with honors.

After Joe Romant retired from the police force, the family moved to Tallahassee to be closer to Karen Romant’s retired parents, where she earned a Master of Arts in Theatre from Florida State University in 1997.

Her thesis project was an oral history performance entitled A Cloud of Witnesses, which she wrote and directed.

In 2006, the Romants relocated to St. Petersburg when Karen Romant became the interim drama director at Canterbury School of Florida.

They moved to Parrish in 2008, and Romant founded and served as director of the drama team at West Coast Church; she continues her work in drama ministry now at Hope International Ministries in Bradenton.

Romant’s experience as an actor and the director of the last two murder mystery plays Parrish Playworks produced for the Florida Railroad Museum, her college education, her teaching theater and her working on the Red Rooster Tales has prepared her well for writing the original script for Murder on Moonshine Express.

“This actually is the first one that I’ve written from scratch, from the very beginning,” she said, “and the only premise that I had was it needed to be set in the 1920s and have some mobsters and molls in it.”

But writing a murder mystery for an audience traveling on a train has peculiar problems.

Romant had to deconstruct and rewrite the last two Parrish Playworks productions for the Florida Railroad Museum’s Murder Mystery Dinner Train, The Auctioneers Last Call and The Hopeless Diamond, to work on a stage that is two railroad train coach cars.

“In order to balance things (for those two plays) going on in two train cars at once, I had to write another scene, do some editing and adapt each one,” she said.

“This time around I thought, ‘You know what? I think it’ll be less work just to write this play because I already have the experience of working on the train,’” Romant said.

For more information about Parrish Playworks, visit its website at www.parrishplayworks.org.

To learn more about the Florida Railroad Museum, go to its website at www.frrm.org.