It will operate from its same location, with the same smiling faces and same services – only now in a smaller footprint. 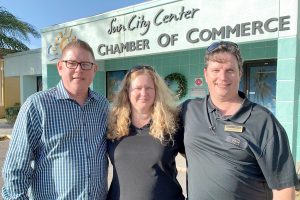 LOIS KINDLE PHOTO
After closing on the sale of the Sun City Area Chamber of Commerce building Jan. 3, Ben Sverdlow, left, Wendy Dimmock and her husband Gordon will be moving Club Car of Sun City to 1651 Sun City Center Plaza. The chamber office will remain in the front of the building, and the golf cart business will be located in 3,800 square feet behind it.

Club Car of Sun City general manager Gordon Dimmock, of Bradenton, and business partner Ben Sverdlow, of Apollo Beach, closed on the property Jan. 3 as co-owners of the building.

In the spring, they will move the business from 761 Cortaro Drive, Sun City Center, to the 3,800-square-foot space behind the chamber office, formerly used for meetings and events.

“We were spending an inordinate amount of time setting up and tearing down the room, cleaning up after events and handling maintenance issues,” said Lynne Conlan, the chamber’s executive director. “I’m so excited to be able now to focus on my real job of helping member businesses.

“We’ll still be offering the community the same services we always have, like faxing, copying, providing directions and helping out in any way we can.”

His reasons included its key location and the chamber’s reputation. “Having the chamber as tenants is a good partnership,” he said. “I put a notice on Facebook at 10 a.m. the Saturday after the closing, and we already had a customer come to the building.”

He and Sverdlow have big plans for their purchase. 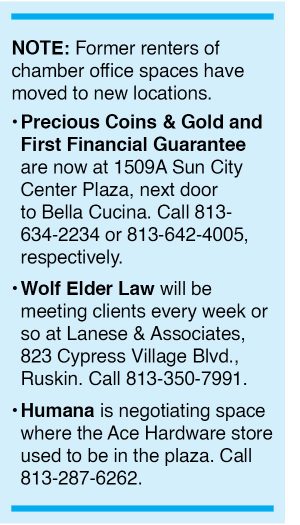 It will include a 1,500-square-foot showroom for new and used Club Cars, a 1,000-square-foot service department, couple of offices and a parts room to include parts for most makes and models of golf carts.

“We will host a grand opening (celebration) sometime in March or April,” Dimmock said. “We actually feel privileged to have been able to purchase the building, and we owe it to the support of our customers. And with this new location, we’re looking forward to serving even more customers.”

Dimmock, 48, and his wife are originally from South Africa. After living in England for 17 years, they decided to move their family to the United States.

To get a U.S. visa, however, they had to buy a business, so the couple purchased Ray’s Golf Carts in Wimauma.

“When I was a kid, I always had an interest in designing and building cars,” Dimmock said. “Club Car is as close to a car as you can get in a golf cart.”

In 2017, Sverdlow, whose family has been in the golf cart industry since the ’70s, purchased Gordon Dimmock’s shares of the business and brought a Club Car dealership to Sun City Center. Dimmock stayed on as general manager and his wife, who kept her shares, became co-owner of Club Car of Sun City with Sverdlow.

As stated previously, with the recent closing on the chamber property, Sverdlow and Gordon Dimmock are now the building’s co-owners.

Everyone’s excited for the franchise’s future. “We feel we have one of the best reputations in town, and we’ve worked very hard to maintain it,” Dimmock said. “Our plan is to continue providing the same level of high-quality service from this new location.”