LINDA CHION KENNEY PHOTOS
The view from the stage at the Celebration of Life for Earl Lennard, held Jan. 11 at Dr. Earl J. Lennard High School in Ruskin. “I wish you all could see this room from my vantage point, what a tribute it is to Dr. Lennard,” said Florida Sen. Tom Lee.

Hundreds of people gathered at Dr. Earl J. Lennard High School in Ruskin to celebrate the life of the school’s namesake, whose journey on earth left its indelible mark. 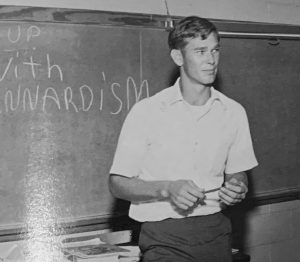 Earl Lennard, then and now, is remembered for his wise, witty sayings. As his daughter, Missy Lennard, recalled, Lennardisms include, “Even a blind pig gets an acorn now and then” and “shoot the gator closest to the boat.” When she had trouble sleeping, he’d say, “Well, a clear conscience has the softest pillow.”

A copy of the 1967 East Bay High School Warrior yearbook was on display at the celebration, in which seniors dedicated the edition to Lennard, a young teacher who taught World History, American History and Problems in American Democracy.

According to the students, Lennard as a teacher was “patient with our shortcomings” and gave “support to our teams” with his “enthusiastic announcing of our games.”

“You are a farmer at heart,” their dedication continues. “You are planting seeds of patriotism in your students. Your satisfaction will come when you see these seeds bear fruit.”

Indeed, testament to that realization came to light at Lennard High on Jan. 11, with a standing- room-only crowd in the 500-seat auditorium.

“When you grow up as a child with a parent in public service, you always know that you share that parent with the community,” said Lennard’s son, Jeremy, technology resource teacher at Bloomingdale High. “Thank you for sharing our dad with us and showing us what an impact he had on other people.” 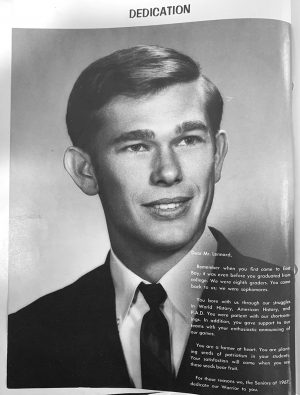 In 1967 the seniors at East Bay High School dedicated the Warrior yearbook to Earl Lennard, “a farmer at heart” and a social studies teacher “patient with our shortcomings.” They noted: “You are planting seeds of patriotism in your students. Your satisfaction will come when you see these seeds bear fruit.”

Former Florida Gov. Bob Martinez said he recommended to then-Gov. Jeb Bush that Earl Lennard be appointed Hillsborough County Supervisor of Elections, to fill the remaining term of Phyllis Busansky, who died unexpectedly in 2009. Lennard completed her term and then his own elected, four-year term.

He retired in 2005 as superintendent for Hillsborough County public schools, a system he entered as a first-grader at Palm River Elementary.

“Not only was he school superintendent, he was a community leader,” Martinez said. “He wasn’t in a shell. He didn’t hide behind his title of doctor or school superintendent. He was just Earl, so he could talk to almost anybody, because nobody was intimidated by titles.”

Florida Sen. William J. “Bill” Montford III, the CEO of the Florida Association of School Administrators, said Lennard as superintendent of the state’s third-largest school district would advocate as strongly for the smallest of rural districts.

Pinellas County School Superintendent Mike Grego worked for Lennard in Hillsborough and said his former boss “had that uncanny ability to make you feel at ease, while pushing you to realize the potential within you.”

Florida Sen. Tom Lee said Lennard tirelessly supported agricultural, vocational and technical education and that his tenure as superintendent was especially difficult, thanks to the echo of the post-1945 baby boom making its way through the school system. 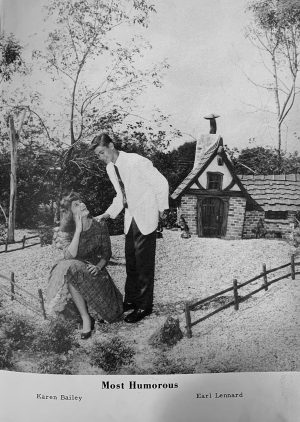 In high school, Earl was voted “Most Humorous,” along with schoolmate Karen Bailey. He graduated from Brandon High in 1960.

Under Lennard’s watch, Hillsborough grew from the 11th-largest to the eighth-largest school district in the nation, necessitating the addition and renovation of some 90 schools. He contended with the fears and budget shortfalls in the aftermath of the 9/11 terrorist attacks and in his wake left a contingency fund of more than $300 million. When court-ordered desegregation ended in 2001, Lennard oversaw the development of school choice and magnet schools.

As testament to “what a great man and what a great leader he was,” Lee praised Lennard’s “commitment to government efficiency, to doing things the right way, to making every dollar count” and “to taking care of old schools in the inner-city while we had to build new schools in the suburbs.”

Lennard grew up in Palm River, one of nine siblings, including the Rev. Charles Lennard and Houston Lennard.

“We wanted to improve people’s lives, whether it was in ministry or education,” Charles Lennard said. “I told Earl, I’ll save them, you teach them, and we’ll have the smartest people in heaven.”

Houston Lennard asked celebrants to “honor the light that was my brother Earl.” Commit “always to sharing the love and care that Earl gave to us with those whom we are in a position to advise and counsel.” 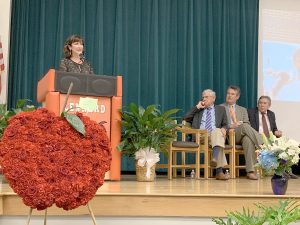 Missy Lennard, principal of Stowers Elementary School, speaks at her father’s Celebration of Life. Looking on are her brother, Jeremy, technology resource specialist at Bloomingdale High, and her uncles, the Rev. Charles Lennard and Houston Lennard. A flower arrangement in the shape of an apple signifies her father’s lifelong commitment to education.

Celebration of Life speakers included also Winthrop co-founders John and Kay Sullivan; Jim Hamilton, Lennard’s long-time colleague, from teaching intern to deputy superintendent; and Lennard’s doctor, Hoshedar Tamboli, who echoed the sentiment of others in noting the strength of Annabel, Lennard’s wife of 55 years, who stood by her husband every day of his health ordeal.

Lennard died Dec. 23 after being hospitalized with a prolonged illness since Thanksgiving 2018. He was 77.

Missy Lennard, the principal of Stowers Elementary School, said her father “never lost his sense of humor, his wit, his true grit to fight.” When parts of his fingers and toes had to be amputated, he asked the doctor “to take off as little as possible, because I have farm equipment to operate.”

“He never lost hope and faith,” Missy Lennard added. “He stayed that same strong person who would never give up. He never asked, ‘Why did this happen to me.’ I’m so proud of the example he set, for truly getting through the trials and tribulations of the past year.”

Even in death, the teacher lives on. 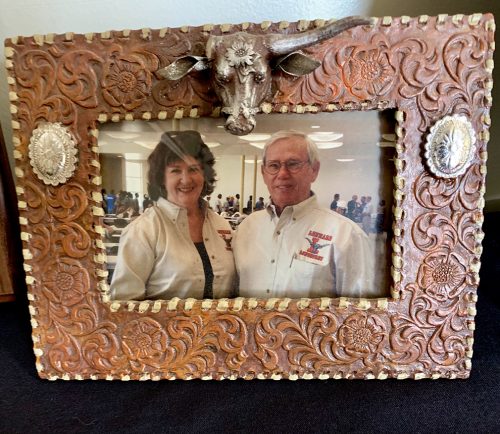 Married for 55 years, Annabel and Earl Lennard, pictured in a frame that pays tribute to the Lennard Longhorns, mascot of the Dr. Earl J. Lennard High School in Ruskin. 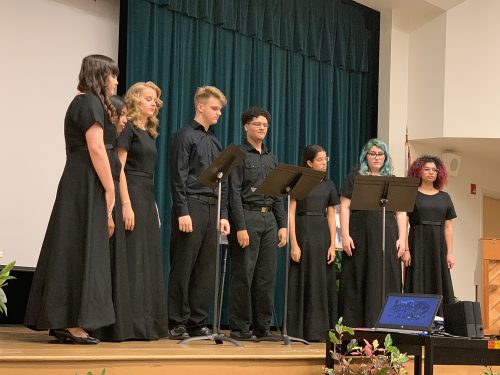 The Dr. Earl J. Lennard High School chorus performed at the Celebration of Life on Jan. 11 for their school’s namesake. 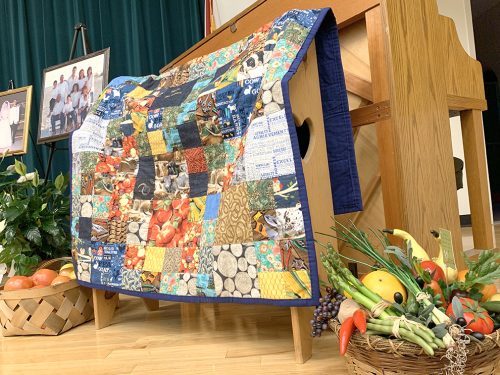 Family photos, a special quilt and baskets of tomatoes and vegetables adorn the stage at Dr. Earl J. Lennard High School, where the Celebration of Life was held Jan. 11. 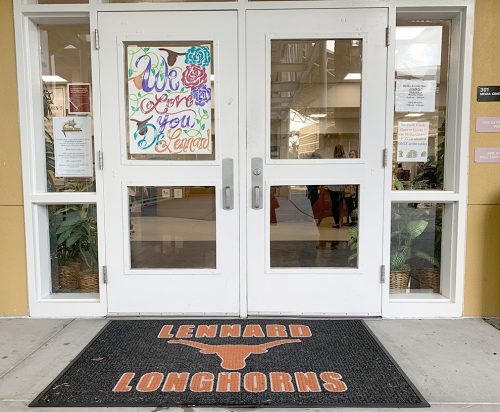 The entrance to the media center at Dr. Earl J. Lennard High School on Jan. 11 sports a sign that reads, “We love you Dr. Lennard.” Principal Denise Savino said it is an honor and a privilege to lead a school named in Lennard’s honor and that his memory will continue to be celebrated at the school. 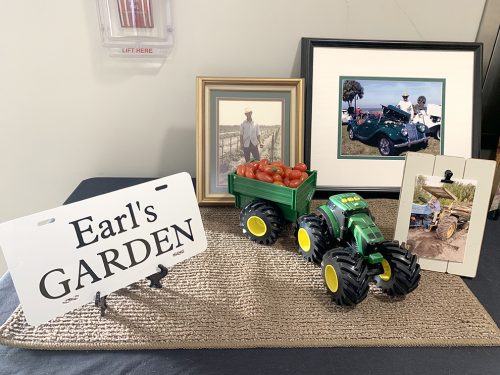 A tribute to “Earl’s Garden,” on display at his Celebration of Life at Dr. Earl J. Lennard High School.