Hobbyists and commercial and migratory beekeepers meet monthly at the Hillsborough County Extension Service to encourage newcomers to the craft and to support experienced beekeepers through troubling times. 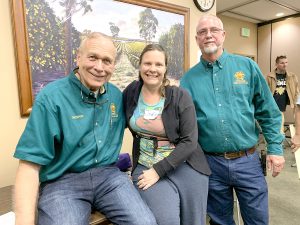 With them Jan. 9 was Jodie Morgan of Riverview, whose interest in beekeeping dates back to childhood.

“My father used to do it when I was younger, and I know we have such a problem today with bees dying,” she said. “I have a son, a toddler, and he can start young. He needs to learn about issues and how to help his environment.”

Morgan said she became aware of the monthly beekeeping meetings through a simple online search that led her to the Tampa Bay Beekeepers Association (TBBA), which meets the second Thursday of the month at the extension service in Seffner, at 5339 C.R. 579.

The association serves as a focal point for experienced beekeepers and provides contacts, support and mentoring for “new-bees” to the field.

Most Saturdays following the monthly meeting, members gather at an offsite location to view hives and pollination in action. Covered are topics key to beginning beekeepers as they “look inside the hive,” including Hive Construction, How To Find the Queen, Honey Extraction, Bee Transport, Pulling Honey, Nectar Sources, and Re-Queening.

“There’s so many things to learn,” Morgan said. “I’m here to learn, from top to bottom, how to build a beehive and deal with ants, beetles and other issues.”

Betty Jo Tompkins is the executive director of the Hillsborough Soil and Water Conservation District (HSWCD) and often attends monthly beekeeper meetings. Her nonprofit is holding a poster contest, which asks students in kindergarten through grade 12 to illustrate the theme, “Where Would We BEE Without Pollinators.” 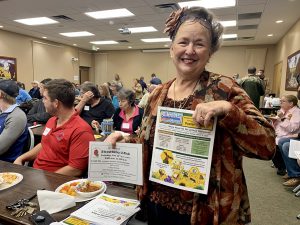 “It should concern people that the total count of beehives between April 2018 and April 2019 decreased by 40.7 percent,” she said. “This is unsustainable and the beekeepers are committed to maintaining and increasing the bee population within the United Sates and the world.”

The association is broad-based, she added, “open to everybody from the individual starting beekeeper to the person who might have hundreds of hives as a commercial apiarist.”

Count among them David Smith, president of the Tampa Bay Beekeepers Association, who reports having about 150 hives, down from a high of 800. Smith said he started dabbling in beekeeping as a teenager, thanks to a next-door neighbor apiarist. As an adult, Smith became a commercial beekeeper and has been at it for 21 years.

Alarm over honeybee numbers has grown since the winter of 2006-07, when Colony Collapse Disorder (CDC) was termed in the United States, a phenomenon in which the majority of worker bees abandon their colonies. Additionally, die-offs are linked to disease, bee-toxic pesticides, habitat changes, poor nutrition, weather, farmer and beekeeper mistakes and parasitic pests, including the invasive varroa mite.

Smith warned meeting attendees Jan. 9 to stay attentive, because without a formidable winter season, they’re likely to see a larger infestation of the parasitic verroa mite, which spreads viruses and feeds on the fat reserves of adult bees and larvae. Officials say once infected with this parasite, a colony will die within one to three years if left untreated.

“The biggest thing to learn is how to keep the bees alive,” Smith said. “Some of you might not believe in chemicals, and that’s fine. But believe in something, because if you’re not going to treat them at all, you’re part of the problem, not the solution.”

Alternative treatments, such as a powdered sugar, are sometimes considered, “but you have to stay on top it,” Smith said, noting male bees (or drones) “can go from hive to hive carrying mites with no problem.”

He recommended attendees visit the Bee Informed Partnership online, at www.beeinformed.org. The partnership is a national collaboration of leading research labs and universities in agricultural science working to better understand honeybee declines in the United States.

Honeybees collect pollen and nectar from flowers for their hives, and in so doing, pollinate many crops, which allows farmers to produce sufficient quantities of food.

The keynoted speaker at the TBBA Jan. 9 meeting was Joel Jackson, a retired park and design and construction manager for recreation properties in Hillsborough County, including Lettuce Lake Park. Jackson has been active in conservation and public lands in the region for more than 40 years.

Items on display for the post-meeting raffle at the Tampa Bay Beekeepers Association meeting, Jan. 9. A similar raffle is held after each monthly meeting.

Vote for our hometown everyday hero…