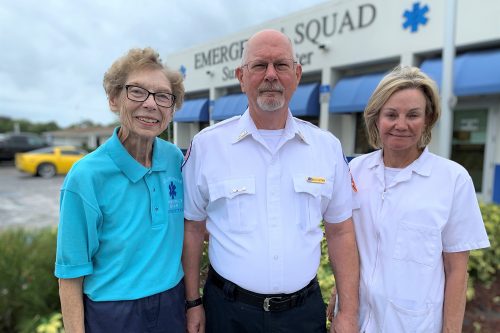 Sun City Center Emergency Center volunteers Jenny Casey, left, and Leslie Anderson, right, recently saved lives when they were off duty, thanks to their knowledge of CPR. They are shown here with the squad’s CPR director, John Gentry.
LOIS KINDLE PHOTO

Octogenarian Jenny Casey, a retired nurse, recently saved a family member at her birthday party at a small resort hotel at Sanibel Island.

She had come back from the beach, and suddenly the family member was found lying unresponsive on a bedroom floor. She knelt down to start applying compressions and breaths, and then her son took over the compressions.

Responding to a 911 call, a fireman came to assist five to 10 minutes later, put an AED defibrillator on the victim, and he was taken to the hospital by paramedics in an ambulance.

“We followed the ambulance to the hospital, and within an hour and a half, he had received heart stents, and we were talking with him,” Casey said. “He’s doing great now.”

Casey’s son and wife have since taken a CPR class.

Leslie Anderson, 74, a former psychiatric nurse practitioner, joined the emergency squad in September to become one of its emergency responders. Within days of completing her training (which included CPR), she, too, saved a life.

“I was never more grateful for having learned something than I was that day,” she said, recalling how she had administered CPR during a social dinner at the Plaza Club at Freedom Plaza. “An elderly gentleman started getting pale and nodded off at his table. He was still breathing but unresponsive. Seconds later, he stopped breathing.”

“All I remember thinking was, ‘This stuff really works,” Anderson said. “This saves lives.

“Many days after, I kept thinking what a wonderful gift we were able to give someone. The rewards are huge.”

“You never know when you might need to use it,” Anderson said. “You could save the life of a neighbor, family member, friend, even someone you don’t know. That’s awesome.”

Just what is CPR?

According to the American Heart Association, keeping the blood flowing, even if only partially, extends the opportunity for a successful resuscitation, once trained medical staff arrive.

That’s because the human body has only five minutes of oxygen in it at any given time, and once blood flow stops, the brain’s function dies at about 10% per minute. Compressions keep blood flowing throughout the body and to the brain and bring the blood back to the heart.

“American Heart Association data shows individuals who experience cardiac arrest have a much better chance for survival if someone does immediate compressions,” said John Gentry, director of CPR (cardiopulmonary resuscitation) training for the Sun City Center Emergency Squad. “If you’re there for that critical five minutes before the emergency squad or Fire Rescue arrives to take over, you have significantly increased that person’s chance of surviving.”

Gentry said that’s why the squad is so willing to do CPR training as a community outreach. It can be arranged for associations, businesses, church groups and more. The squad’s 10 trainers are all certified by the American Heart Association. For information, call Gentry at 813-633-1411.

For information on taking a CPR class on Basic Life Saving for individuals through the SCC Emergency Squad, contact Gentry at 813-633-1411. The class is held at the Training Center on South Pebble Beach Boulevard, and the cost is $25 per person. It includes the use of dummies, audio-visual aids, AED trainers, pocket masks and more.