Learn how to avoid government impersonation scams and tax fraud

It’s that time of year again, when scam artists are impersonating government officials and threatening to arrest you if you don’t pay up.

Their correspondence looks official, and many folks end up sending thousands of dollars to criminals seeking to defraud them. But Hillsborough County Sheriff’s Office Community Resource Deputy Jeff Merry wants you to know it’s all a sham. 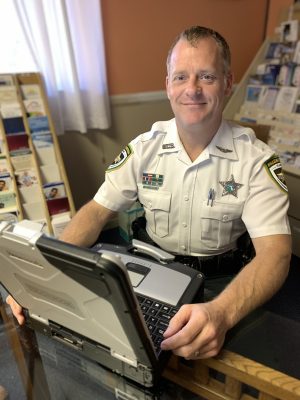 LOIS KINDLE PHOTO
Hillsborough County Sheriff’s Office Community Resource Deputy Jeff Merry wants to help you avoid being victimized by government impersonation scams and IRS tax fraud. He’ll be presenting a seminar on both topics Jan. 14 and 21 in Sun City Center. The public is invited, and admission is free.

He will be presenting information this month about government scams and IRS refund fraud to help you keep your money in the bank where it belongs.

The deputy will discuss these topics on the following dates:

All are open to the public and free.

“This age demographic is the No. 1 target for financial scams like this,” he continued. “I do these seminars in the hope that when people are informed, we will have fewer victims.”

In the government impersonation scam, someone claiming to be a representative of the IRS, Social Security Administration, Department of Medicare and Medicaid Services or the Veterans Administration calls, emails or occasionally sends a letter to tell you your account is locked or frozen, and a payment is needed to restore your benefits. The caller threatens you with arrest or a lawsuit for failure to pay.

“I actually handled a report recently that supposedly came from Medicare and another from Social Security,” Merry said. “The latter claimed an overpayment to the recipient had been made and a reimbursement was required to reactivate the account.”

It’s important to remember that Federal government agencies and their employees don’t deal with people this way.

They don’t ask for financial (like credit card numbers) or personal information, and they will never request you wire them money or add money to a prepaid debit card. Criminals do.

Just hang up or don’t reply to an email or letter.

If you get such a call, report the scam at www.ftc.gov/complaint. Include the date and time of the call, the name of the agency the caller used, what was said and the amount of money he or she requested, the method of payment requested and the phone number, if known.

Phishing emails can be reported to phishing@irs.gov. They should be deleted immediately afterward.

“Florida is one of the top states for this type of fraud,” he said. “Although the numbers are going down, billions in fraudulent refunds are still being filed.”

Merry will talk about two-part authentication for filing taxes and how its use is cutting down on fraudulent returns in Georgia, Michigan, Illinois, California and Florida.

For more information or to report a scam locally, call Merry or Michelle Mortimer at 813-242-5515.