Remembering the legacy of

Tributes are pouring in for Earl J. Lennard of Riverview, remembered as a common man with uncommon achievements who never forgot his roots.

Lennard, the namesake of the high school in Ruskin, died Dec. 23 after being hospitalized with a prolonged illness since Thanksgiving 2018. He was 77.

“It’s a sad day for Riverview that we lost Earl Lennard,” said Tanya Doran, executive director of the Greater Riverview Chamber of Commerce. “This man made a difference in his community each and every day. That’s what he’s known for. He made a difference in every position he held, and it’s our job now to honor him and what he’s accomplished and the history he’s lived through. We should strive to be more like Earl.” 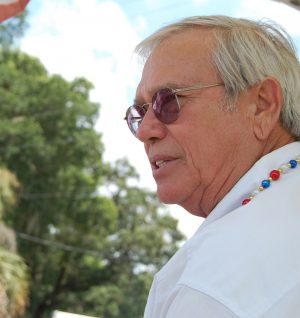 Earl Lennard, of Riverview, in 2009 served as a judge at the Greater Brandon Fourth of July Parade, one of his many community associations that proved him a tireless community servant throughout the decades. LINDA CHION-KENNEY PHOTO

A graduate of Brandon High School and a member of the University of South Florida’s inaugural class, Lennard entered the Hillsborough County school district as a first-grader at Palm River Elementary and left almost 60 years later as its superintendent of schools, a position he held from 1996 to 2005.

A history major, he taught at both elementary and high school levels, and as a Gleaners Sunday School teacher at Riverview United Methodist Church. One of nine siblings, he worked on his family’s farm and tended to the details of its roadside vegetable stand. He held the positions of deputy superintendent and assistant superintendent, for both administration and for vocational, technical and adult and community education. In 2009, Gov. Charlie Christ appointed Lennard Hillsborough County Supervisor of Elections to replace Phyllis Busansky, who died unexpectedly. He served the remainder of her term and ran unopposed for his own four-year term.

Under his watch as schools superintendent, the district grew from the 11th-largest to the eighth-largest school district in the nation, necessitating the addition and renovation of more than 90 schools. He contended with the fears and budget shortfalls in the aftermath of the 9/11 terrorist attacks, and in his wake left a contingency fund of more than $300 million. Court-ordered desegregation ended on Lennard’s watch, and he led the development of magnet schools and school choice. 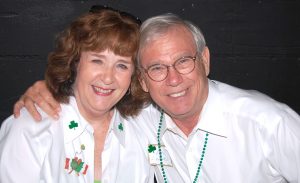 Earl Lennard, of Riverview, and Annabel, his wife of 55 years, were long-time members of Riverview United Methodist Church. The couple has two children: Jeremy, a technology specialist at Bloomingdale High; and Missy, the charter principal at Richard “Dick” Stowers Elementary School. Among others, survivors include Lennard’s daughter-in-law, Rebecca Lennard, and his four grandsons, Riley and Denton Shields and Christian and Jackson Lennard.

Lennard is known as well for his community service, serving in leadership and board positions, among others, for the Hillsborough County Fair and the Riverview chamber, through which he established the annual Teaching To Excellence breakfast. He was instrumental in helping to establish the Boys & Girls Club in Riverview, with a group that included his dear friend Richard “Dick” Stowers, who died in January at age 89.

“The thing about both of them is they were down-to-earth people,” said Stowers’ wife, Raymetta. “If you asked them where they would like to go to eat, they would say the sandwich shop.”

Both men “believed in children, and that was a common thread,” she added. “Both of them were chosen to have schools named after them because of their beliefs in children and education.”

For Jim Hamilton, the memory burns bright of a trip 51 years ago to Wimauma, taken when Hamilton, then 21, was a student intern under the supervision of Lennard, a 26-year-old social studies teacher at East Bay High.

“He wanted me to see the conditions some of our kids lived in, so he took me to a high poverty community for migrant farmworkers,” Hamilton said. There, on Railroad Street, Hamilton said they stopped at a small house sitting off the back of the road, with a ditch of standing water in front. Behind it was an open window, no screen, with a baby’s crib in view. 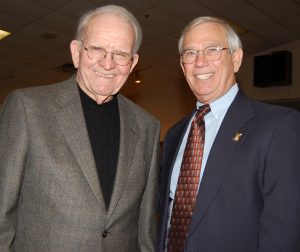 “Earl told me, ‘When you see these kids in school, remember that’s somebody you have to help never go back to that situation when you’re done educating them,” Hamilton said. “That was a very vivid picture, hard to forget, and it became my life’s mission.”

Hamilton, like Lennard, would rise through the ranks of the school system. When Lennard retired, Hamilton was deputy superintendent for instructional support. He said Lennard as superintendent “was the right person for the job, first and foremost, because he never lost sight as to why we were there, which had everything to do with that baby in that crib in that house off Railroad Street in Wimauma.”

As for the legacy Lennard leaves behind, Hamilton didn’t skip a beat.

“They should know that a person from common roots can rise to extraordinary levels,” he said. “And in so doing Earl always remembered there’s a difference between the important work of an important job and the person in that job, and to never become focused on the belief that the important work he had to do made him an important person.”

Lennard “had plenty of ego strengths to endure the challenges of his life, but he never grew an ego that needed to be massaged and pandered to,” Hamilton added. “He was always just about doing the things that were right in life, and there’s not many folks who pass through life without losing sight of that. He was one of them.”

A Celebration of Life is set for 2 p.m., Saturday, Jan. 11, at Dr. Earl J. Lennard High School in Ruskin. In lieu of flowers, donations can be made to Riverview United Methodist Church general fund for a scholarship program in Lennard’s name, soon to be announced.