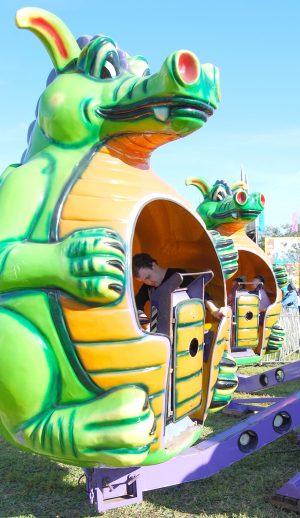 The 2020 Manatee County Fair, held from Jan. 16 through Jan. 26, will have a long midway of rides for young children and adults.
CARL MARIO NUDI PHOTOS

This catchy phrase is this year’s theme for the 104th edition of the annual event, held at the Manatee County Fairgrounds, 1303 17th St. W., Palmetto, across the street from Palmetto High School.

“It’s the 2020 fair, so we knew it would be something about vision, like perfect vision,” said Dan West, who has been with the fair for 19 years, two years as assistant fair manager and 17 as manager.

West recently was hired as executive director of the Florida Federation of Fairs and Livestock Shows. Longtime volunteer and Manatee River Fair Association board member, Danny Alfonso, took over as fair manager of the Manatee County Fair on Sept. 1.

“I loved coming to the fair,” Alfonso said. “My focus was on the livestock part for 20 years, and [I am] now getting to realize there’s a lot more happening behind the scenes.”

West said this year’s fair will offer some new entertainment and events, as well as all of the favorites. “For the last two years we had the veterans’ parade and this year wanted to do something different, so we are having the Veterans’ Tribute Evening with two special guests,” he said.

Country singer Darryl Worley, known for writing and singing “Have You Forgotten” after the 9/11 terrorists attacks, will be at the Veterans’ Tribute Evening on Jan. 21. West said Worley has flown overseas multiple times to visit the troops in Iraq and Afghanistan and has put on concerts for them. “He does this a lot, not just overseas, but in this country also,” West said. “He’s only going to do one or two songs, and also do a meet and greet with veterans and have pictures taken with them if they want.” 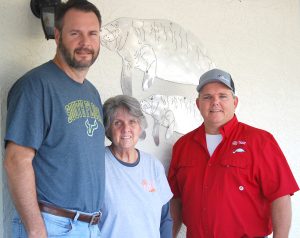 Dan West, executive director of the Florida Federation of Fairs and Livestock Shows, left, and former Manatee County Fair manager, is helping out Cindy Patterson, office manager for the Manatee River Fair Association; organizers of the county fair; and Danny Alfonso, who was hired Sept. 1 as the new fair manager.

Army veteran and author of “I Am a Soldier, Too,” Jessica Lynch, also is schedule to meet and greet the crowd on Veterans’ Tribute Evening. A former prisoner of war during the Iraqi War and Bronze Star and Purple Heart medals recipient, Lynch will speak with the veterans who attend the event held at the Entertainment Center on the north end of the fairgrounds.

“We have 26 local sponsors for this event, and we’ve raised $9,500 to bring these people here,” West said. “No one I spoke to said no. Everyone I talked to jumped right on it and said they’d be glad to do it.”

There will not be a parade this year, just the meet and greet, which is open to the public, West said. Both Lynch and Worley will be available for photos with veterans. “As long as there are veterans there, they’ll be there to take pictures,” West said. “We had a good turn out the last couple of years with the veterans, so it’s something we want to keep on doing.”

There will be free admission to the fair that night because the faith-based community organization, Palmetto Build, bought out the gate. “They want people to come to the fair where they can talk to people and plug them into the community where they can volunteer,” West said. “That same night we’re raising money for the food bank, so we’ll be taking donations of money at the gates. “The food bank is involved in the Veterans Stand Down event held every year at the fairgrounds, along with the Homeless Coalition, so we want to help raise some funds,” he said.

The county fair also will offer a range of musical entertainment for every taste. The legendary country group Restless Heart will headline at 7:30 p.m., Jan. 17 at the Entertainment Center. “This group was just starting out when Danny and I were in high school; now they’re on their 35th anniversary tour.” West said. “They have a lot of great songs and they sound exactly the same,”

Another new act is an up and coming country singer, Tony Jackson, who will perform at 7:30 p.m., Jan. 24. “He’s got some great songs, and he sounds a lot like George Jones,” West said. 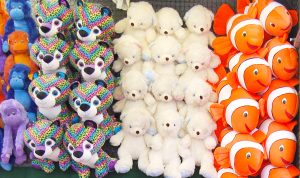 Games of chance booths line the midway at the 2020 Manatee County Fair, held from Jan. 16 through Jan. 26.

Along with these new groups, some new non-musical entertainment acts are scheduled to perform at the fair. “We keep things the same for several years,” West said, “then we’ll change it around a little bit to keep it fresh.” The Three Ring Super Circus will perform several times a day near Gate 3. Danny Grant’s Cowboy Circus will teach his audience how to use a rope cowboy style at Veterans’ Hall.

Another new act scheduled to perform several times a day is the Agricadabra Magic Show, focused around agriculture on the Gate 9 Walkway. And the Amazing Bubble Factory will be strolling around the fairgrounds doing amazing things with very large bubbles.

Preserving its agricultural roots, the exhibition halls on the fairgrounds will be filled with the arts and craft of local residents, and the animal sheds will have the hard work of 4-H and FFA students on display. “Agriculture is the reason and basis of the fair,” West said. “That’s why we’re in existence, to promote agriculture industry and heritage.” This year the livestock show will have a record number of youth participating. “There are 225 hogs signed up alone,” Alfonso said.

“We usually have around 600 livestock,” West said. “We probably have a little over that this year, just based on the number of hogs.”

The popularity of the livestock exhibitions at the fair can be attributed to great 4H programs and agriculture teachers at the high schools promoting the fair activities. Agricultural programs in the county schools are growing with two new FFA chapters being organized this year: one at Parrish Community High School and one at Sugg Middle School. 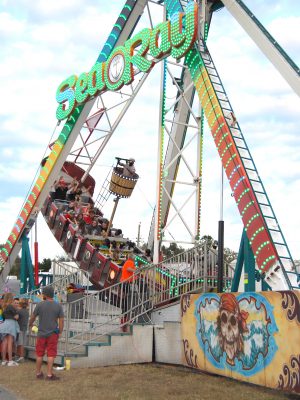 Along with the rides along the midway of the 2020 Manatee County Fair, held from Jan. 16 through Jan. 26, visitors can check out the livestock exhibitions, have some great county fair food, and watch the variety of live entertainment.

A native of Palmetto, West was a former agriculture teacher at Palmetto High School before serving as the Manatee County Fair Manager. Now as executive director of the Florida Federation of Fairs and Livestock Shows, he is responsible for planning the federations’ four-day convention, along with other events.

The Florida Federation of Fairs and Livestock Shows is a trade group of the 52 fairs and shows chartered under Florida Statue 616. The organization also has associate members, such as those in the entertainment booking industry, food vendors, and the amusement providers who want to let the fair directors and others know they are available. Belle City Amusements is an associate member and provides the rides and game booths for the Manatee County Fair.

West also has to hold fundraisers, work with the federation lawyers on fair issues, and educate state legislators on matters pertaining [to] the fairs held throughout the state.

“We always want to keep people educated about what’s going on with the fairs: how we’re set up and how we’re regulated,” West said. “So that’s the purpose of the federation, to basically keep everyone educated and to keep everyone on the cutting edge of what’s happening with fairs across the country.”

With West’s move to the new federation position, Alfonso, who started volunteering at the Manatee County Fair in 1999 in the livestock area doing anything he was asked, will be in charge of this year’s fair. “I wanted to volunteer because my son, Holden, was involved with 4-H at the time,” Alfonso said.

Alfonso grew up in Tampa, but after graduating from high school started working as a ranch hand at the Schroder-Manatee Ranch in East Manatee County. His Uncle Roger Hill, who lived in Manatee County and was the ranch manager, was involved with the fair for many years and was president of the Manatee River Fair Association board for many years.

Alfonso became steer barn superintendent in 2000 and held that position until 2009 when he became an associate director on the fair board, serving on the livestock committee.

For a schedule of events and more information, go to the Manatee County Fair website at www.manateecountyfair.com or call 941-722-1639.

Also, an app, which provides a schedule of events and other information while at the fair, can be downloaded to a cell phone.