When it’s the season to give and the need is great, the option to step back and do nothing is never a good one, said James Hartley, of Riverview, who this year continued his family’s 31-year mission to deliver toys, food and clothes to migrant farmworkers and their children.

For close to 10 years the holiday drive has taken place at La Estancia apartments in Wimauma. Hartley said 91 families and 153 kids gathered Dec. 21 to receive donations collected, delivered and distributed, in most part, by folks associated with Christ Fellowship of Tampa, Tampa Rough Riders, Mickey Buys Houses, Brewlands Bar and Billiards, Boy Scout Troop 33 of Land O’ Lakes and the Kiwanis Club of Carrollwood, where Hartley has been a member for 43 years. 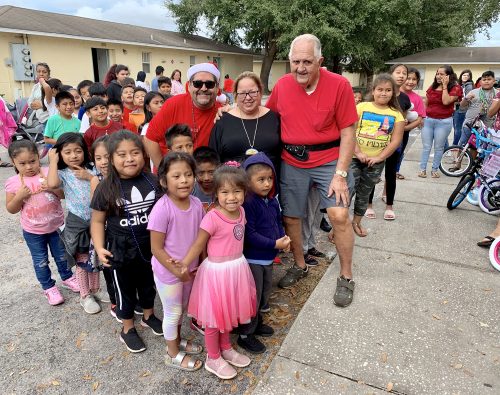 Hartley, a church deacon for 50 years, is a member of Christ Fellowship, formerly known as Tampa Baptist Church and Spencer Memorial Baptist Church. He traces today’s drive to a newspaper article he read 31 years ago about families in need and a number to call to help, which led to a United Way referral to the Good Samaritan Mission in Sun City Center.

“Riverview then was in the sticks, and Wimauma was in the boondocks,” Hartley said. “I finally found the mission.” That first year, with less than three weeks to go before Christmas, Hartley learned there were 150 families in need, and his family was able to help three. Today, 31 years later, his now multigenerational family mission “has morphed into this,” a communitywide affair connecting a number of Tampa Bay interests.

“You never get everything done you want to do on a mission trip, and this is a mission,” Hartley said, as children lined up Dec. 21 to receive raffle tickets for drawings of bicycles by gender and age level. “You never have enough time and money to provide for all the need. You do all you can, and that’s what you do.”

As for the need that is not met, “If you dwell on it, you won’t do anything,” he added, “and doing nothing is not an option.” 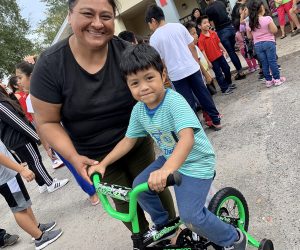 Michael Santos, of Mickey Buys Houses, agreed. He said it’s the fifth year his employees, and people he does business with, participated in the drive, collecting bikes and toys for the effort. His hope was to increase the giving this year to ensure every child got a bike. With 53 bikes on hand — all but five new — the effort fell short, but that only means the community of givers needs to grow again next year as well.

“It’s never enough,” Santos said. “The numbers grow every year. We do what we can, and I feel happy for what we’re doing.”

Still, no one left empty-handed at La Estancia, where boots, shirts and shorts were among the gifts received, as well as toothpaste and toothbrushes, candy bars and bags of food containing cornmeal, pinto beans, rice and flour. Children were invited to select from among two piles of toys, big and small. Replacement batteries were left behind as well, along with donations for families working in the field that day, Hartley said.

Moreover, Rough Riders, the second year the group has ventured out to La Estancia for the holidays, delivered teddy bears and other stuffed animals. According to Rough Rider Michael Cauger, the group plans to return again next year.

“We saw last year what a great cause it was, which is why this year we brought even more gifts to give,” he said. “Everybody loved being here, and we’re looking forward to passing the word on it for next year. Me, personally, I loved the turnout, and it’s just rewarding to see the smiles on the faces of kids who otherwise would get so little.” 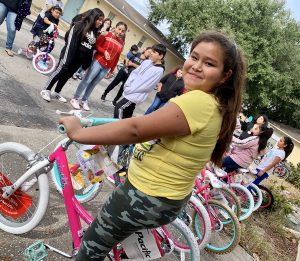 Norma Flores works at La Estancia and grew up in a farmworking family herself. She said the residents of the tight-knit community “come together for each other” during and after their work in the field, harvesting strawberries, cucumbers, squash and tomatoes.

Living on limited means, families over the holidays continue to “buy the necessities that are needed,” she said, at the giveaway Dec. 21. “Here, the kids get something they want, and their eyes open wide.”

Ten-year-old Kelly was among the more than 50 children who were lucky enough to receive a bicycle. “Usually, I walk to school, but I also want to ride my bike to school,” she said. “I think they’re really nice to bring us bikes. They’re really kind.”

Flores remembers her parents taking her to similar outreach events when she was growing up. “Then you grow out of it, and you pass it on,” she said. “And that’s what you want to believe, that these children will grow up and pass it on as well.” 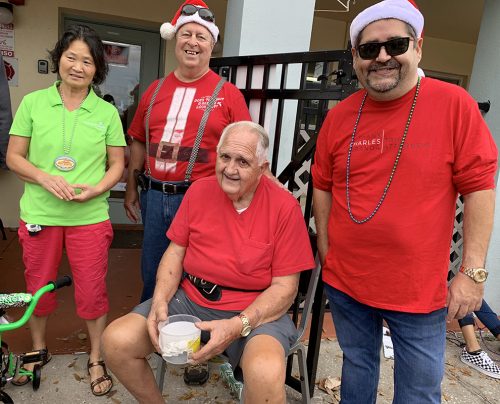 From left, Heather and Aaron Myers and James Hartley, of Christ Fellowship of Tampa, and Michael Santos, of Mickey Buys Houses. “We’re supposed to show the love of Christ to our neighbors, and they are our neighbors,” Aaron Myers said, as La Estancia residents lined up to receive donated gifts. “So that’s why we do it.” 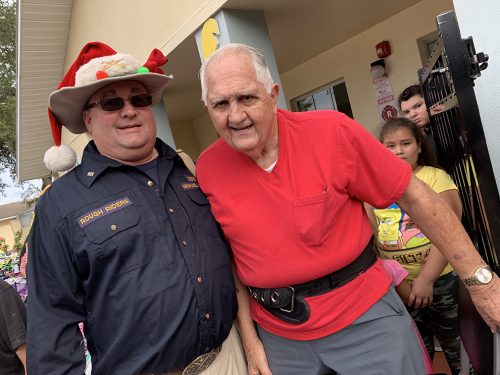 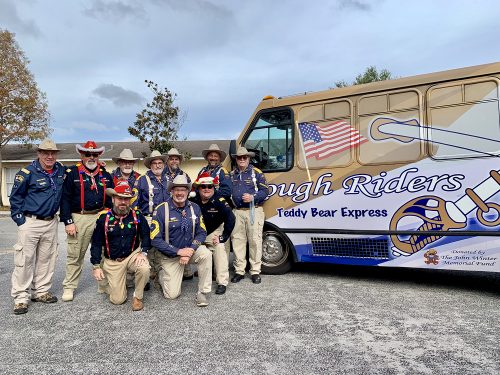 Tampa Rough Riders get set to leave after distributing teddy bears and other stuffed animals to La Estancia children Dec. 21. 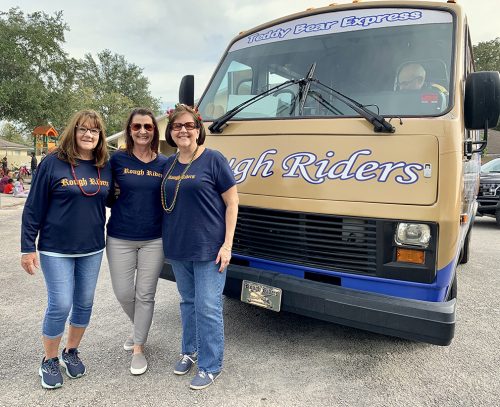 Tampa Rough Rider wives get set to leave after volunteering at the Dec. 21 holiday giveaway at La Estancia apartments in Wimauma. 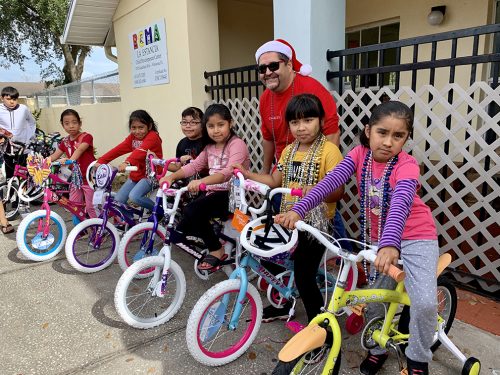 Children lucky in the bicycle drawing sit atop their donated bicycles. 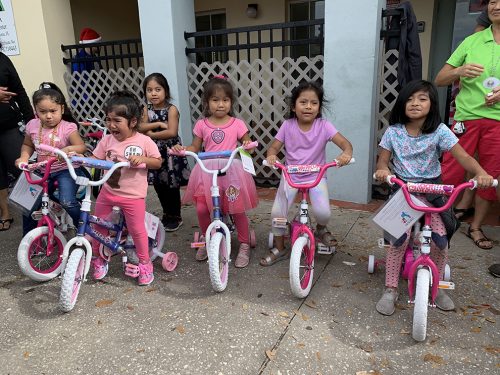 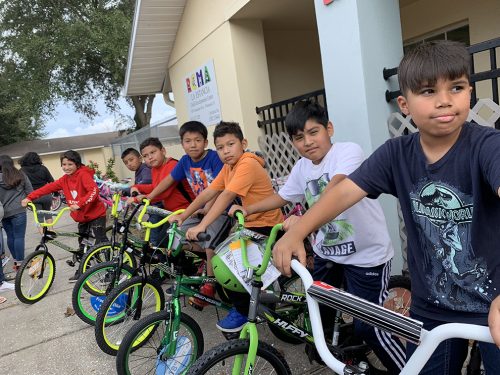 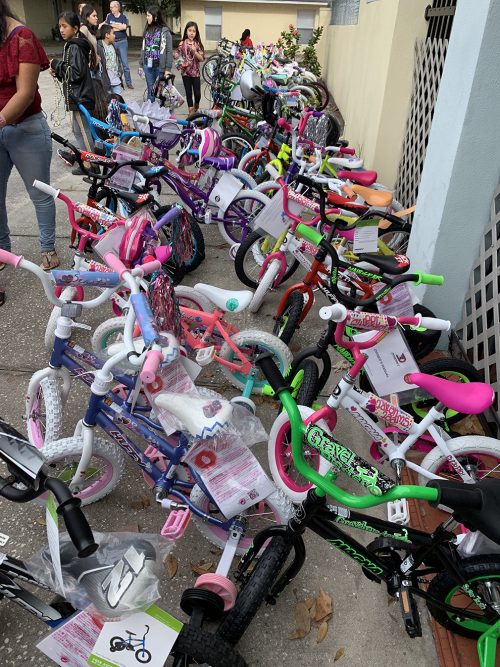 Bikes on display for the Dec. 21 raffle giveaway at La Estancia apartments.