Sun City Center has had its share of “angels” since its inception 57 years ago but few so devoted to the service of others as Doris Healey Ragland.

She passed away Dec. 18 at home in Bradenton at age 98, leaving behind an enduring legacy that will benefit the community for decades to come. 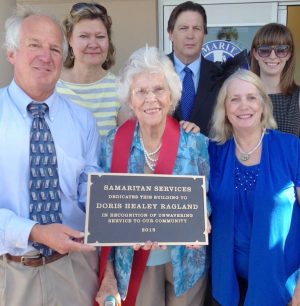 Doris Ragland is surrounded by family during the dedication of the new Samaritan Services building in 2015. In the front row from left are her son Maurice (Bud) Healey, Ragland, and her daughter Kathy Healey. In the back row are daughter-in-law Renee Healey, son-in-law Gary Conelly and granddaughter Emily Conelly.

One of the founding members of the Good Samaritan Fund, which eventually became Samaritan Services in Sun City Center, Ragland served as its volunteer director and president for 31 years. She started the Samaritan Alzheimer’s Auxiliary and SCC Ride and partnered with South Bay Hospital and the GFWC Sun City Center Woman’s Club to facilitate bringing Meals on Wheels to Sun City Center residents.

“Doris was a very firm, intelligent and highly principled woman,” said Sun Towers resident Sue Miller, who worked as Samaritan Services’ office manager from 2000 to 2013. “She was bound and determined to take care of others, especially those with Alzheimer’s. She was hard as nails, but she had the softest heart.”

Kirk Warren, Samaritan Service’s current office manager, agreed. “She was wonderful,” he said. “She’d tell it like it is, but her heart was as big as could be.”

Ragland’s long list of contributions to the retirement community she loved included construction of Samaritan Services’ new building on the Sun City Center Community Association campus in 2016, which she envisioned, planned and oversaw. She “retired” at age 95, shortly after it opened in 2016.

“She talked about (Samaritan Services) all the time and how there was such a big need in the community,” said her daughter, Kathy Healey. “Even though her health was declining, she wished she could still be there. 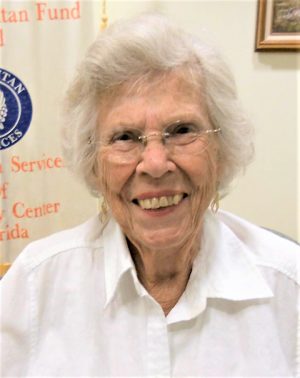 “Whenever she saw a problem, she would try to fix it,” Healey continued. “Nothing made my mother happier.”

Ragland was born on Jan. 7, 1921 in Strasburg, Ohio. After graduating high school there, she trained at the Youngstown, Ohio School of Nursing to become a registered nurse and served in the Army Nurse Corps during the military career of her first husband of 41 years, Maurice Healey, an Air Force dentist.

They moved from Indianapolis in 1971 to retire in Sun City Center, where she quickly became active in the Sun City Center Emergency Squad and went to work as an office nurse for Dr. J. Earl Wentzell. Maurice Healey died in 1987, and she married Mac Ragland in the mid ‘90s.

“I met Doris in 2002 after I retired and moved here,” said Lee Leverett, Samaritan Services’ current president. “I was totally in awe of her love for the elderly and dedication to providing services that were much needed in the community. She rarely said “no” to anyone asking for help.”

Debbie Caneen feels the same. “Doris had a powerful presence and ability to get things done,” a Samaritan Services board member at least a dozen years. “She was truly inspirational in everything she did.”

Ragland will be buried alongside Maurice Healey at Arlington National Cemetery. The date has yet to be determined.

Samaritan Services will host a Celebration of Life for Ragland from 10 to 10:45 a.m. Jan. 20 in the Caper Room in the SCC Community Association’s Atrium Building, 945 North Course Lane. The public is invited to come and meet her family members, who will be in attendance. Immediately following at 10:45, there will be a brief memorial service.

If you can’t make the Celebration of Life, you can mail a card or note to Samaritan Services, 1207 Pebble Beach Blvd. N., Sun City Center 33573. It will be forwarded to her family.

And if you’d like to help continue Ragland’s legacy to the community, send a donation in any amount to Samaritan Services at the same address.