This year the Sun City Center Bingo group (275 strong) demonstrated a generous holiday spirit with a rather unique sharing gesture. Instead of exchanging with each other, the players contributed a bounty of gifts and cards for South Bay Hospital patients and residents of 12 nursing homes/assisted living facilities. The idea behind the project: Everybody should have somebody thinking about them during the holiday season. 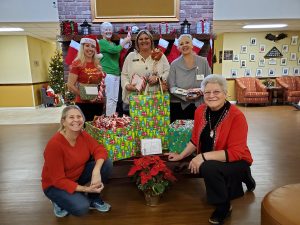 This was actually Bingo’s second year for this project. Bingo leaders Karen Marmon, Robin LeMaster and Gerry Ready said there was a resounding “YES” when they asked the group about a repeat of the project this year. “Everybody got involved, and they had fun coming up with ideas. They got really creative, and we collected 329 gifts and 1,710 cards,” she said. The assortment of gifts included useful items such as socks, calendars, back scratchers, manicure sets, crossword puzzles and senior coloring books. To add a personal touch, each gift was accompanied by a card with the first name of the contributor and “Bingo.”

December 18 was delivery day (except for South Bay Hospital when patients received cards on Christmas Eve). Karen Worley, executive director of Pacifica Senior Living, was ecstatic about the generous gesture. To her knowledge, this was the first time every resident—all 101 of them—received gifts and cards from a single group.

Bingo, with roots stretching back to 1530, is thought to be of Italian origin. The game as we know it in the U.S. was popularized in 1929 by Edwin Lowe, a toy salesman from New York. In 1929, he observed the game at a country carnival in Atlanta, Georgia. It was then called Beano because players used dried beans to mark their cards as the numbers came up. 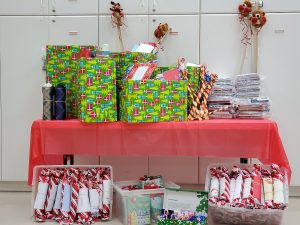 Bingo players contributed 329 gifts and 1,710 cards to be distributed to residents in assisted living/nursing home facilities in Sun City Center and patients in South Bay Hospital.

Observing the players’ enthusiasm and noting how popular the game was, Lowe introduced it to his friends. During one game, a lady got so excited by her win that she yelled “Bingo!” The name stuck and by the mid-1930s, Bingo games were popping up all over the country. It was known to be easy-going and fun and became a popular small stakes gambling game, mostly used for fun at home, charity and other events. Bingo players come from all walks of life, and although most regular players are over the age of 45, surveys show that Bingo is being discovered by young people every day as a new way to socialize.

Sponsored by the Sun City Center Community Association and run by volunteers, Bingo has been a popular activity in SCC since the early ‘60s. The fun takes place at the Community Hall every Monday evening.