Home for the Holidays! That theme for the Sun City Center Golf Cart Parade really brought out some amazing creativity. The weatherman cooperated as cart occupants and spectators shouted holiday greetings during the hour-long parade. Participating were over 50 decorated carts, four carts with visiting dignitaries and vehicles from the Sheriff’s Department and Emergency Squad. The SCC Radio Club and Security Patrol were also on hand to help with communications and traffic control. 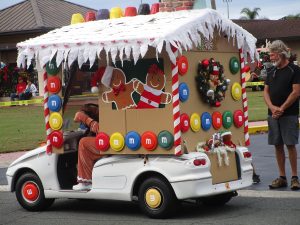 When the parade reached the route end on Cherry Hills Drive, the carts were parked on the Central Campus grounds around the bandstand, giving everyone the opportunity to ooh and ah them up close and personal. Larry Smith, parade chairman, thanked the committee that had been planning the event since July and those who helped on parade day. Cart prizes were announced by judges from Boggs Jewelry, Sun Radio and WaWa.

An entry by neighbors Barbara Durant and Beckie Wagner won first place ($250) in the Individuals category for their candy & gingerbread cart. Winning second and third were Barbara Phillips’ Grandma Got Run Over by a Reindeer cart and Helen Nardick with her Winnebego, complete with towed vehicle.

The Kings Point Cloggers took home the Groups first place ($250) for the club’s Bright Holiday Wishes cart. The Shrine Club won second for its Shrine theme, and the Irish Connection won third with its cart depicting Around the World, complete with a circulating Santa. 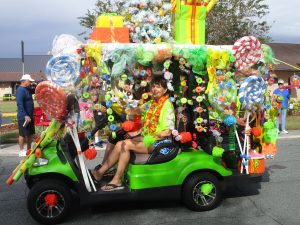 Groups category winner was Kings Point Cloggers with its “Bright Holiday Wishes” themed cart. Club members were so brightly attired they blended in with the cart.

In the Business category, the Nearly New shop in SCC created a shop structure and received a first-place trophy.

The big winner of the day was Tracy Fraser who had bought ONE raffle ticket from the SCC Security Patrol for the 2019 Ion golf cart that had been displayed on the Patrol lawn for months while tickets were sold. Tracy, who lives in Wimauma, said she plans to gift the cart to her parents, Cricket and Bruce Fraser, who live in Sun City Center.

After the parade, the SCC Community Association treated visitors to refreshments and an enjoyable holiday concert by 25 members of the Gay Men’s Chorus of Tampa Bay in Rollins Theatre.

A video of the parade is being prepared and can be seen on You Tube and on the TV in the CA Atrium Building in the [next] couple of weeks. It will also be posted on the Friends of Sun City Center Facebook page. 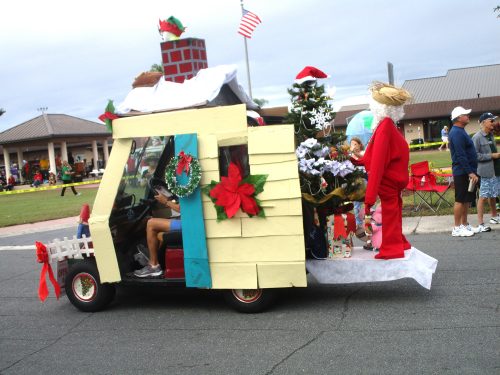 In the Business category, the Nearly New shop in SCC took home the first place trophy. 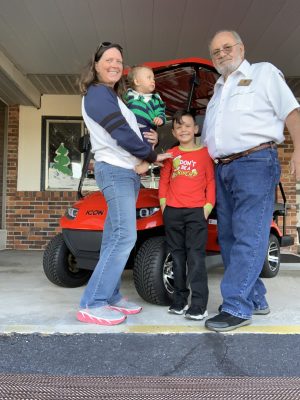 Tracy Fraser says it was her son Caleb’s idea to buy the $5 ticket that won a 2019 Ion golf cart, raffled by the SCC Security Patrol. Here with Caleb (center), his mom and brother Asher is Security Patrol Chief Fred Fiedler.