More than 30 students and teachers at Manatee School for the Arts in Palmetto pitched in and helped carry hundreds of boxes of canned goods from a classroom to a waiting truck on Nov. 22. 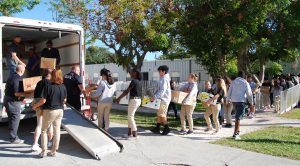 The 3,500 donated cans of food were headed to a Sarasota collection point for all the food stuffs collected throughout Manatee and Sarasota counties for the annual Mayors’ Feed the Hungry program.

Manatee School for the Arts civics teacher Kevin Gush coordinated the school’s efforts and was impressed with the number of canned goods collected.

All of the canned goods were collected during the school-sponsored “Food for the Soul” Halloween event in October, where there was a haunted house, games, a dunk tank, and other fun activities, Gush said.

More than 700 people attended the event.

“Nothing cost any money,” he said. “You had to bring a can to get in, and for every extra can you brought, you got a ticket for the activities.”

Gush said one student brought 100 cans of food to the Food for the Soul event.

“She must have gone through the haunted house 80 times,” he said.

Gush, who has been a teacher at Manatee School for the Arts for 10 years, said he incorporates the food drive into his civics class curriculum.

“It’s an example of a hands-on activity of civic duty,” he said. 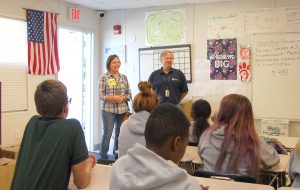 Before the army of students began carrying the boxes, which lined the classroom walls, to the truck, Penny Johnston, administration aid to Palmetto Mayor Shirley Goover Bryant told them how impressed she was with their efforts to collect so much food.

“This will mean so much for those in need,” Johnston said.

The Mayors’ Feed the Hungry program started in 1987 to make sure the food banks in the two counties had enough food for the holidays for those who depend on them.

Since being founded by then-Sarasota Mayor Fred Akins in1987, the program has collected and distributed over 600 tons of food and over $3,600,000 in food gift cards for those in need in Sarasota and Manatee counties.

For more information about the Mayors’ Feed the Hungry program, visit its website at www.mayorsfeedthehungry.org.