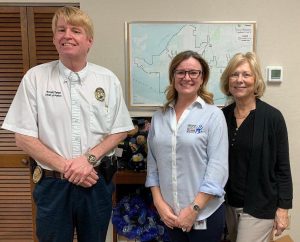 “We applied for the grant three times over three years, and the third time was a charm,” said Palmetto Police Chief Scott Tyler, one of the partnership’s board members. “We got it.” The grant will be paid out over 10 years and has to be matched locally.

The North River Prevention Partnership, which will work with other Manatee County drug use prevention organizations, has the mission “to promote health and wellness across the lifespan, especially among youth,” said the partnership’s director, Ally Bergmann.

“The hope is (to use the grant) to expand existing youth programing in Manatee County,” Bergmann said. “What we have already started with DFY (Drug Free Youth) and Youth in Action, which are very popular.”

The fledgling, but growing, North River Prevention Partnership will work the well-established coalition Drug Free Manatee to implement its programs.

“The Drug Free Communities grant is designed for the purpose to engage the entire community,” said Sharon Kramer, executive director of Drug Free Manatee (DFM), which was started in 2001. “There is a board, and the board has representation from across the community, so there are a lot of strategies in place that create a healthy community.”

Bergmann was the associate director of Drug Free Manatee before taking over the helm in November of the North River group based in Palmetto. “The North River Prevention Partnership is blessed to find Ally,” Kramer said. “She’s going to bring services in a greater way to the North River area, but her launch is with Drug Free Communities, which was south of the river.”

Bergman has a Master of Science degree from the University of Florida in Family, Youth and Community Science, which focuses on supporting health and wellness in a community, and she also is certified in Florida for substance abuse prevention.

She has been doing prevention work specifically for Drug Free Manatee for over four years, but she also was a volunteer on the DFM task force, was in charge of DFY in Manatee County, was project director of the Manatee County Substance Abuse Prevention Coalition, worked at First Step in Sarasota as a substance abuse counselor and volunteered at Bridges of America, a Florida Department of Corrections drug program for women.

As director of North River Prevention Partnership, Bergmann runs the Youth in Action program. “This is the favorite part of my job,” she said. The Youth in Action is a student lead, adult guided program based on an evidence-based program called Students Leading Students, Bergmann explained.

“We take 75-100 students and train them to use a strategic prevention framework, which is a professional tool for community assessment,” she said. “We make sure the training contains lots and lots of activities for students.”

There is a Youth in Action club at Palmetto High School, and Bergmann is working to get the program started at the new Parrish Community High School and the charter school, Manatee School for the Arts.

“There are a lot of really great components to the program,” Bergmann said. “Different community partners will come in and offer information and education in various topics.” This year the students received training in a mental health program called You’re Not Alone.

Bergmann said community participation is important to the program. “Any one person has a small window of opportunity to affect the life of a person,” she said. “A community has a larger window. As a society we have a deeper responsibility to do that,” Bergmann said.

Chief Tyler said it was the coming together of the community that made receiving the grant a success. “We saw a need here, north of the Manatee River, for targeted services, especially in the area of prevention,” he said. “Over the past years there’s been a tremendous amount of attention on the opioid crisis, especially in Manatee County,” the chief said. “We became an epicenter for Florida.”

But as a community, everyone came together to look at ways to address that crisis, and the community has been very successful in a lot of ways, Tyler said. “Especially looking at drug treatment,” he said. “But as we shifted toward treatment, we weren’t doing as much in the prevention area as we used to do many years ago. And they go hand in hand,” Tyler said.

He said the idea behind North River Prevention Partnership was to bring resources to the table in the area of prevention, especially among our young people, and to involve them by listening to what they have to say about substance abuse in their community.

“One of the things that North River Prevention Partnership is looking to do as we move forward is making (the programs) youth-centered,” Tyler said. “We are working on setting up a youth advisory board because, annually, Drug Free Manatee conducts a survey, and finding out what the kids are doing is important.

“What the kids really see as a problem,” the chief said. “Hopefully it’s giving us a kind of thumbnail on what is going on.”

But Tyler said the organization wanted to take it a step further. “From the beginning we wanted to hear from the young people in the schools north of the river,” he said, “so we can create programs relevant to our young people rather than just giving them videos and pamphlets.“

“These kids already know they need support to maintain good mental health,” Bergmann said. “They need skills to recognize when to reach out for help when something is beyond them.”

She said the North River Prevention Partnership would work with other organizations in Manatee County to expand existing services by specifically identifying needs and filling the gaps in services for residents north of the Manatee River.

“North River is so much different than Bradenton and Lakewood Ranch and the islands that we have identified differences almost immediately,” Bergmann said. “This is an opportunity to bring what we know will work in the North River area and also an opportunity to fill the very unique needs of the citizens here.”

For more information about the North River Prevention Partnership, contact Ally Bergmann at 941-720-8679 or Chief Scott Tyler at the Palmetto Police Department at 941-721-2000.

To learn more about Drug Free Manatee, visit its website at www.drugfreemanatee.org.

The Florida Youth Substance Abuse Survey for Manatee County can be found on the Internet at www.myflfamilies.com/service-programs/samh/prevention/fysas/2018/docs/county-tables/Manatee.pdf. 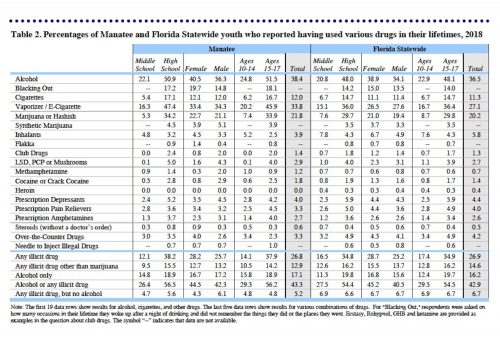