Kelly Kowall, one of South Shore’s own, was recently recognized by the Tampa Bay Lightning as its sixth Lightning Community Hero of the season. 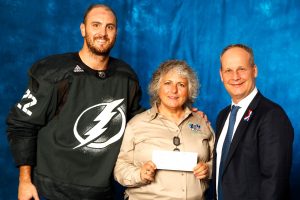 As such, she received a $50,000 donation from the Lightning Foundation at a Nov. 14 home game against the New York Rangers. Kowall will donate the money to My Warrior’s Place, a 501(c)3 nonprofit organization she founded to honor her son Corey who died on a combat mission in Afghanistan Sept. 20, 2009. The retreat provides much-needed respite and support for veterans, military service members, first responders and their respective families.

“It was very exciting to have been chosen,” Kowall said. “I got the call Sept. 17; it was an awesome birthday present!

“I still had to submit three years of tax returns and other paperwork so the foundation could do its due diligence vetting us as a legitimate 501(c)3. I also had to go through a personal background check.”

The gift was well deserved.

During the past year alone, My Warrior’s Place and its programs have positively impacted the lives of more than 557 active military personnel, 1,173 veterans, 62 first responders and 178 Blue, Silver, White and Gold Star family members.

The retreat is highly respected in the South shore community.

“We are so fortunate to have Kelly and My Warrior’s Place here in Ruskin,” said Melanie Davis, executive director of the SouthShore Chamber of Commerce. “For the past ten years, hundreds of our local residents, churches, schoolchildren and others have volunteered there, while learning more about what it does. At that same time, thousands of men and women from our area and from all over the world have come to My Warrior’s Place to start their grieving and healing process. I can only imagine the pride that her son Corey would have for his mom right now. She has filled a much-needed gap in the after-battle world of servicemen and women.” 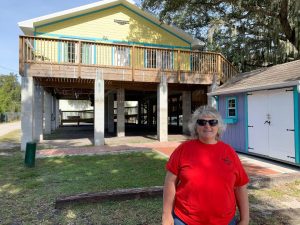 Kelly Kowall stands in front of the stilted, three-bedroom, two-bath home at My Warrior’s Place she plans to enclose for storage and garage space with part of the $50,000 donation she recently received from the Lightning Foundation.

Kowall said the Lightning Foundation’s donation will be used by My Warrior’s Place as follows: $5,000 will go to its Corregidor Grief Program; $5,000 to its F.A.V.E. Boating Program; $5,000 to the retreat center; and $5,000 to its Everyday Heroes Program, which provides catastrophic relief for local community heroes, including firefighters, law enforcement and veterans.

The remaining $30,000 will be used to enclose the bottom of a stilted, three-bedroom, two-bath home with wheelchair accessibility to use for storage and garage space. In lieu of that, the money will go toward property improvements and acquisitions, Kowall said, adding she has one year to use the funds.

“Our goal is to be done by June, provided county permitting is approved,” she said.

In addition to the $50,000, Kowall also received a Tampa Bay Lightning jersey. She chose number 9 on it to represent the year Corey died, the month he died and her own birth month, she said. To top things off, the team won 9-3 that night, which she was told was its highest number of goals ever in a single game.

Kowall also got to sit on the players’ bench until the team came out and took the ice; she then received a tour of the locker room.

“I think its wonderful the Lightning supports its community by giving back,” Kowall said. “And I’m so thankful to the organization for choosing me.”