Your holiday gift to veterans this year: Leave your fake service dog at home

Every day, legitimate guide and service dog users are asked to leave hotels, restaurants, taxis, movie theaters, airplanes, malls, apartment houses and other public places because people don’t understand our dogs’ access rights under the Americans with Disabilities Act (ADA), the Fair Housing Act and the Air Carrier Access Act, all of which protect people with disabilities. But even more often, people buy fake credentials and jackets for their pets and bring them on planes … especially at the holidays. This abuse of the system makes the situation even worse for people like me. It shouldn’t be so easy to pass off a pet with false credentials, but it is. In Florida, it’s a second-degree misdemeanor, punishable by a fine and community service time. So, please, don’t do it. 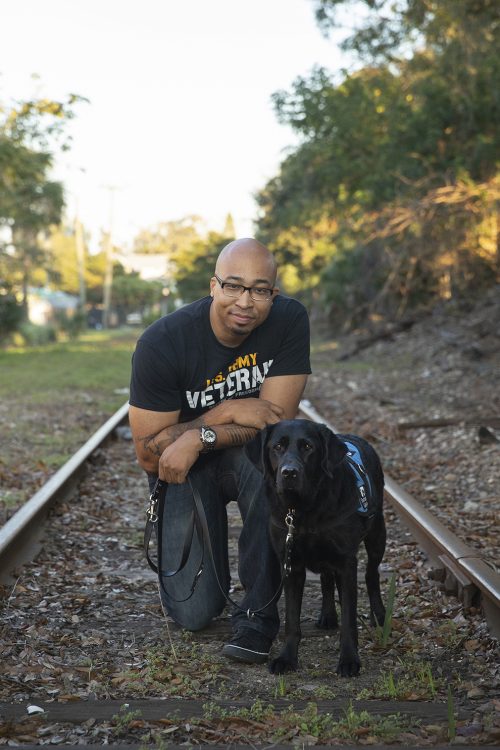 After serving seven years in the United States Army, Sean Brown tried to juggle five part-time jobs, but severe post-traumatic stress had him taking 16 pills a day. He was obese, angry, depressed and suicidal and plagued by anxiety and hyper vigilance. Then Sean was paired with a black Lab named Pella from Southeastern Guide Dogs. In 2019 he joined the organization as a fundraiser and spokesman. When he travels, Sean is constantly confronted by fake service dogs that make it hard for legitimate, highly disciplined and trained dogs like Pella.

Dogs like my life-saver, Pella, are trained by Southeastern Guide Dogs to perform tasks that mitigate invisible and physical disabilities. They spend two years learning obedience and commands at a cost of tens of thousands of dollars and are provided to veterans like me free of charge. A service dog can calm someone with severe anxiety, retrieve dropped items, provide stability, remind a handler to take his/her medication, turn on a light, give reassurance and much, much more.

Pella makes it possible for me to face crowds, to shop in a busy supermarket and eat in a restaurant without anxiety. Far from being a pet, she provides me steady empathy, support and sensitivity to the flashbacks, nightmares and stress that used to be crippling. By contrast, non-housebroken, aggressive or otherwise untrained pets being passed off as service dogs often create trouble for merchants, the airlines and restaurateurs. People can fly with an emotional support animal as long as they have a doctor’s letter, and many professionals say they now get pressured to write such letters for their patients. Many times, these animals bite, make a mess in public or otherwise give legit service dogs a bad name.

This holiday season, please, stop and think. Fake service dogs aren’t just wrong; it is also against the law to pretend your pet is “working” to mitigate a disability when you know it isn’t. On behalf of the guide and service dog handlers out there with true needs, please don’t do it.