The giant seahorse at the foot of the Green Bridge 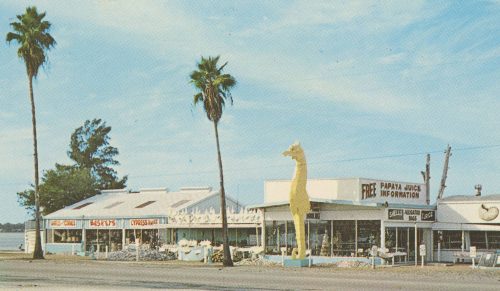 PROVIDED PHOTO
As shown in this postcard from the Manatee County Historical Records Library collection in Bradenton, the original souvenir shop and seahorse stood at the foot of the old Green Bridge on the Palmetto side of the Manatee River.

Anyone traveling the old U.S. 41 route in the 1950s, ‘60s, and ‘70s, when it went directly through downtown Palmetto, would remember the souvenir shop with the giant seahorse at the foot of the old Green Bridge.

“As a kid growing up in Palmetto, it was a landmark for us,” said Jeff Burton, director of the Palmetto Community Redevelopment Agency. “We didn’t need a street sign; you just knew you were heading across the bridge.”

The CRA board commissioned artist Ron Berman to recreate the giant seahorse as a “tip of the hat to Palmetto history because we were looking for a (recognizable symbol) for the city similar to Bradenton’s using a manatee,” Burton said.

Berman, who has rented the empty Growers’ Hardware Store building for his local studio, said he was excited about the project and hoped it would become as important to the community as the original seahorse.

“We don’t want to bring back just memories,” he said. “We want to bring back celebration.”
The St. Petersburg artist said as he was doing research and talking with people about the seahorse project, he was impressed with how much the original stature meant to them. 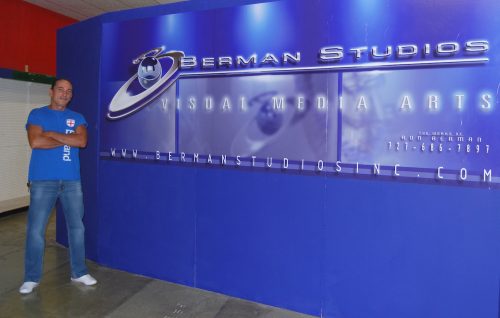 CARL MARIO NUDI PHOTO
St. Petersburg artist Ron Berman, whom the Palmetto Community Redevelopment Agency commissioned to sculpt a giant seahorse, recreating the iconic landmark that once stood at the foot of the old Green Bridge in Palmetto, started studying art as a young boy.

“What really inspired me was how many people came forward and said, ‘My brother worked (at the old souvenir shop),’ or ‘We used to go there on Saturdays,’” Berman said.

He said he wasn’t just building something but thought “this is (a project) that means something to the community,”

At 22 feet tall — four feet more than the original — the new seahorse will be a monumental project.
There was a giant 20-foot-long piece of Styrofoam lying on its side in Berman’s Palmetto studio at 911 Fifth St. W., just next door to the Palmetto Art Center.

After weeks of creating computer-generated maquettes, small three-dimensional mock-ups of the full-sized sculpture, Berman was now designing tools and equipment to begin carving the Styrofoam piece.

When the carving is completed, it will be coated in fiberglass and mounted on a six-inch-diameter steel pole, which will be attached to a specially constructed base at the site.

Berman said he is looking to have the sculpture completed by February.

The 57-year-old artist was born in Israel and moved to Long Island, N.Y, when he was 8 years old. He moved to Clearwater 25 years ago before settling in St. Petersburg.

Berman did not get his art training in an academic setting. “I got my start in art as a young boy around 12,” he said. “Patricia Windrow, the mother of one of my friends, was an artist, and she started mentoring me. 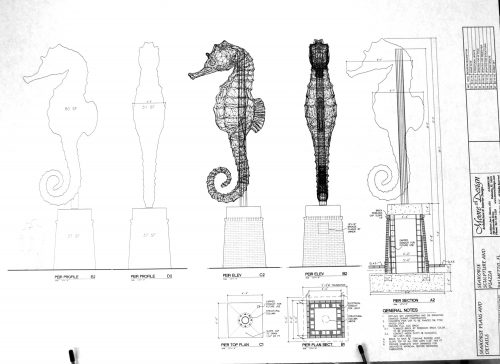 “Pat (Windrow) had her own PBS show teaching painting,” Berman said. “She was a very creative person.” He said Windrow was the main influence on his becoming an artist. “She saw a lot in me,” Berman said. “She’s the reason I am what I am today.”

He said he has always been creative, as he would make models out of used shoeboxes. “My grandfather would appease my grandmother with new shoes, and I got to recycle the shoeboxes,” Berman said.

His grandparents, who helped raise him, were also a big influence on Berman. “My grandmother said my job in this world is to make it beautiful, so pick a job to do that,” he said.

Berman joined the Air Force at 18 and became a crew chief on a KC35 refueling airplane. “I learned how to focus on what was necessary to get the job done,” he said. “I use that same military sense of purpose for art work

Berman said the military provided him background on working with various materials, such as fiberglass, metals or laminates, which is really needed for the project he is working on now.

Although he lives in St. Petersburg, he said he has been involved in Manatee County for 15-20 years because of the work he has done working with Moore2Design, an architectural and interior design firm Palmetto residents Jon and Vicki Moore own.

“I’ve worked with the Moores for 15-20 years on other projects,” Berman said, “because Jon and I think along the same line.”

The artist credited Jon Moore with pushing him to reach for higher success with his artwork. “He is older and smarter,” Berman said of Moore. “He throws things at me to challenge me and make me better.”

Moore has the same high regard for Berman. “It seems like every time we use him, he comes up with something we didn’t expect,” he said of the artist. 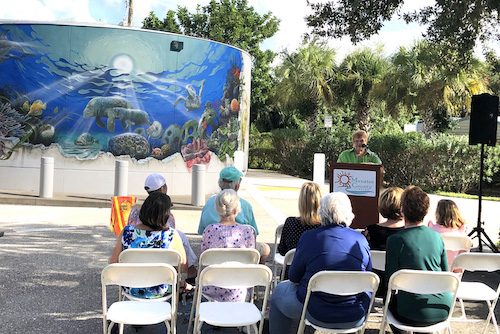 The Moores have lived in Palmetto since 2002, after having worked on design projects all over the world, including Jordan, Japan, Egypt and the United States. Since making Palmetto their home base, they have done several projects in the city, such as Sutton Park, the Evolve Wellness Center & Day Spa and the Palmetto Christian School addition. “We found our little piece of paradise in Palmetto,” Moore said. “We like to think it is our legacy.”

It was through the Moores that Burton of the CRA found Berman. “In discussions about the seahorse, we were fortunate to know a world-renown architect, Jon Moore,” Burton said. “He moved to Palmetto, and he has done work for us, and when we mentioned the seahorse to Jon, he said he has the guy who could handle that project.”

Berman was selected to do a mural on the Manatee County Area Transit Palmetto Station on U.S. Business 41, just north of 17th Street West in Palmetto. “When he came, he started on the bus depot mural, and that speaks for his talent,” Burton said.

During the dedication of the mural on Oct. 25, Palmetto Mayor Shirley Groover Bryant described the mural as depicting the city’s commitment to the environment.

“The seascape mural, as you see, includes a seahorse, reminiscent of the 1950’s Seahorse that was so popular in Palmetto; manatees; a grouper; dolphins; a crab; a clown fish and even captures the oyster restoration and reef ball projects, and with a . . . seahorse statue coming soon to the south end of town and this fabulous seascape gracing the north end of town, Palmetto will be known as a city that truly cares about our waterways and the creatures within,” Bryant said. “Palmetto is actively revitalizing the charm of historic Palmetto while protecting the pristine natural resources that surround the city.

“Palmetto’s identity is evolving from an agricultural community to one that also embraces the arts and the environment,” the mayor said.

For more information on Ron Berman, visit his LinkedIn page on the Internet at www.linkedin.com/in/ron-berman-3202b218/.
To learn more about Jon and Vicki Moore, go to their business website at www.moore2design.com.

Information about the Palmetto Community Redevelopment Agency can be found at its website at www.palmettofl.org/88/Community-Redevelopment-Agency. 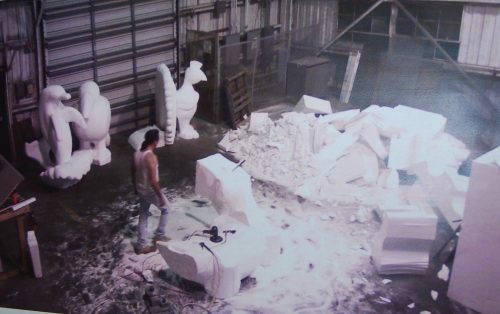 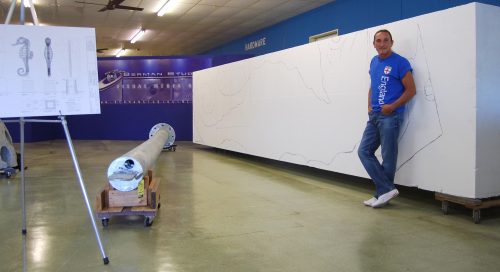 CARL MARIO NUDI PHOTO
St. Petersburg artist Ron Berman stands next to the 20-foot-long block of Styrofoam that he will sculpt into a giant seahorse, recreating the iconic landmark that once stood at the foot of the old Green Bridge in Palmetto. 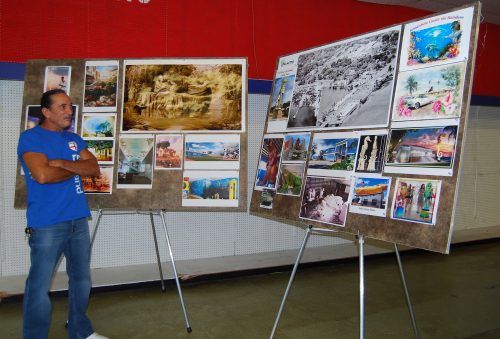 Big Bend interchange at I-75