The Ruskin Branch Library has a new display for browsing by anyone who is fascinated by World War II history or the history of the SouthShore area, according to Michelle Michaud, head librarian at Ruskin. Through memorabilia from the era, as well as newspaper images, visitors will get a sense of what it was like in Ruskin and the surrounding SouthShore area during the years 1941-1943. 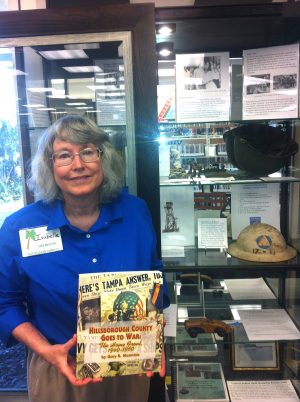 STEPHEN FLANAGAN JACKSON PHOTO
Isabelle Fetherston, former manager of the Ruskin Library branch and now with Friends of the Library, with memorabilia about WWII on display at Ruskin Library.

Charlie Nelson, a docent at the Tampa Bay History Center and a member of the Library’s History and Display Committee, thinks that this new display will be of interest to many people who come through the library’s doors.

“From its founding, Ruskin’s citizens demonstrated strong communitarian ties that included service to others. That service was certainly evident in the early years of World War II, when Ruskin residents swiftly answered the call to serve on both the war front and at home,” said Nelson.

Artifacts on display include a soldier’s helmet, a Civil Defense helmet and a book of rationing stamps belonging to Arthur “Mac” Miller, also a member of the committee and a lifelong Ruskin resident. Through pictures from newspapers of the time, visitors will also learn about blackout protocol and the shortage of farmworkers, which impacted the community’s livelihood.

“In developing this exhibit, we want to show that Ruskinites strongly supported the war effort,” continues Nelson.

“Not only did they provide their sons to fight, they also — like most American communities — did their duty on the home front as well. We know our exhibit isn’t the full story of Ruskin’s engagement in World War II, but we’re hopeful that we will inspire others to tell us their stories.”