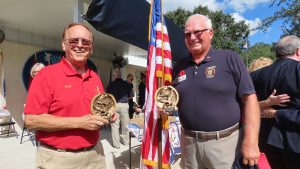 Bill Hodges, left, and Jim Haney were each given the Keeping The American Spirit Alive award at the Regional Veterans Day Tribute in Tampa.

Bill Adkins is a retired U.S. Marine who works tirelessly on behalf of area veterans. He serves as commander and a service officer of the SCC Disabled American Veterans Chapter 110 in Sun City Center and is training to be the DAV service officer at the new VA James A. Haley South Hillsborough Outpatient Clinic in Riverview. He has initiated several veteran outreach activities. For example, through his efforts, the DAV Chapter 110 purchased a new van to transport veterans to and from their medical appointments at the James A. Haley VA Medical Center (Tampa). Adkins is also a member of the SCC Leathernecks Club and the local American Legion post.

Bill Adkins was awarded a Keeping The American Spirit Alive honor at the recent Regional Veterans Day Tribute. Kay Adkins accepted the award for him in his absence.

Jim Haney is also a retired U.S. Marine. The many hats he wears are evidence of his efforts to seek opportunities to serve fellow veterans and his community. They currently include serving as a member of Vietnam Veterans of America Chapter 787, first vice president of the SCC chapter of the Military Officers Association of America, commander of the SCC Chapter of the Military Order of World Wars and trustee with the SCC Military Family Support Trust. Haney represents these organizations as a member of the Veterans Council of Hillsborough County and recently headed up the seniors sub-committee of the Warrior Games Promotional Committee. Additionally, he is chairman of the Chapter 787 Vietnam Veterans of America JROTC awards committee and was the chapter’s primary point of contact for coordination and presentation of the awards to selected cadets from 27 county high schools.

Bill Hodges is a U.S. Air Force veteran. Two years ago, he started Veterans Corner, a radio program dedicated to helping veterans and their families deal with the VA and other government agencies. It airs on Sun Radio WSCQ FM 96.3 and three other stations: WKOT FM 102.1, WPHX FM 101.9 and WYPW FM 90.1. Five years ago, he initiated and still manages a Veterans Video Photo Project for the SCC Community Association, and this year he started Freedom Floats, treating veterans and their families to a relaxing pontoon cruise on North Lake in SCC. Hodges is a member of the SCC Chamber of Commerce Military Committee and actively participates in Bob’s Vets and the Disabled American Veterans. In 2018 and 2019 he organized three successful VA informational town halls in SCC. In recognition of his efforts, he was chosen to emcee the grand opening of the new VA South Hillsborough Outpatient Clinic in Riverview.

The Keeping The American Spirit Alive Award goes to those who go above and beyond in volunteering to provide a better life for our active military, veterans and their families, the community and countrymen.

Leave the lizards at home