back to the land with educational events

More and more family farms were lost over the last two centuries with the growth of industrial and factory farms in the United States. With that change and the majority of people moving to urban areas came the loss of the population’s direct connection to the land. 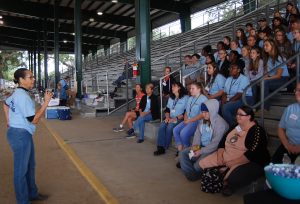 CARL MARIO NUDI PHOTOS
Diana Smith, extension agent and 4-H coordinator for the University of Florida Institute of Food and Agricultural Sciences Extension Service in Manatee County, addresses the hundreds of volunteers Nov. 14 before the start of the Farm-City Week Ag Venture event.

To reacquaint city dwellers with their agrarian roots, area farmers and community leaders started Farm-City Week 62 years ago. This year’s Farm-City Week was Nov. 9-22, with special events held throughout the county.

“The function of Farm-City Week is to educate the urban sector of Manatee County on what the rural sector does and the importance of agriculture,” said Ralph Garrison, who, with his wife Sandy, owns and operates Suncoast Nursery in East Manatee County.

Garrison said he has been involved with Farm-City Week since 1985 because it is important for the community to know its agricultural heritage. He explained that annual Farm-City Week was the idea of Kiwanis International, and the members of the local chapter, Kiwanis Club of Bradenton, helped get the local event organized around 1957.

Ag Venture, one of the more popular events of Farm-City Week, was held on Nov. 14 at the Mosaic Arena at the Manatee County Farigrounds in Palmetto. The daylong event had third graders from 11 area schools learning about agriculture and how it is part of their lives. “We teach them that butter and milk don’t come from Publix,” said Patty Keen-Freed, chair of the Manatee County Farm-City Week Committee, organizers of the week’s events. 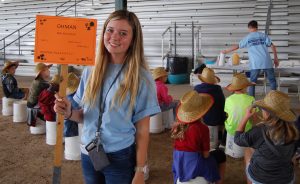 Haileigh Norris, a junior at Braden River High School, said she volunteered for the Farm-City Week Ag Venture event on Nov. 14 because she is active in the school’s Future Farmers of America Chapter. Norris was a designated guide for a class of third graders, leading them from one activity station to the next.

Keen-Freed is a seventh generation Manatee County native, and participated in Ag Venture herself as a young girl, as she was in 4-H Club, as well as Future Farmers of America. Her son, Ethan Freed, 11, participated in the Nov. 14 event with his classmates from Palmetto Charter School.

According to Diana Smith, extension agent and 4-H coordinator for the University of Florida Institute of Food and Agricultural Sciences Extension Service in Manatee County, Ag Venture has become more popular over the years. “It was a smaller event but has grown,” said Smith, who has been coordinating Ag Venture for more than 20 years. “We’re at about capacity now with about 1,000 students. “We get a chance to explain agriculture to them,” she said. “They are two to three generations away” from any personal knowledge of farming.

According to the event’s program, “The experience is designed to educate third grade students about agriculture as it relates to food production, water and the value of agriculture in our daily lives.”

The day started early with hundreds of volunteers getting ready for the school children to arrive, setting up the activity stations, gathering learning materials and going over presentations. 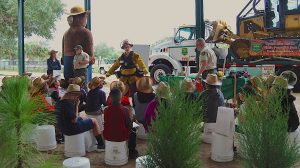 Forest rangers with the Florida Forest Service explain forest fires and agriculture to one group of the third graders who attended the Farm-City Week Ag Venture event on Nov. 14.

The Mosaic Arena was divided into four sections or tracks, each given a name of a piece of farming equipment: tractor, plow, combine and baler.

Each of those sections had from six to eight activity stations, such as tomato growing, beekeeping, dairy, citrus, soil science and many more relating the agriculture industry in Manatee County.

About 9:45 the students started to arrive in buses, and a designated volunteer greeted each class, staying with that group to guide them through the learning activities in an assigned track. To help the students get into the farming frame of mind, each one received a straw hat at the first station visited.

At each learning station the students listened to a specialist explain the importance of the topic and then participated in a hands-on activity. After about 12 minutes the children’s tune “Old MacDonald Had a Farm” was played over the loudspeaker, and the classes proceeded to their next activity station, following their assigned guide. 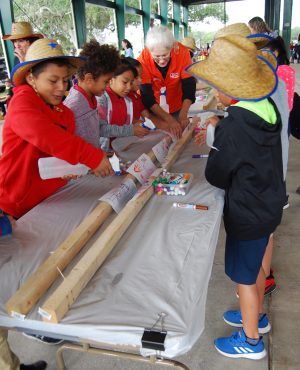 Third grade students learn about pollution and watersheds by drawing water-colored landscape pictures and then spraying “rain” to watch the colored “pollution” wash away at the Farm-City Week Ag Venture event on Nov. 14.

This year’s Farm-City Week theme was Fresh Catch, highlighting Manatee County’s seafood industry.Angela Collins, the Sea Grant agent at the county extension service, was at Ag Venture to teach the students about the importance of marine fisheries.

“When they learn about agriculture, they think about livestock and plants, but they don’t think about seafood products, which is a big part of Manatee County’s agriculture heritage,” Collins said before the students arrived.

At the seafood station the students were given a beaded bracelet with many colored beads, and Collins asked them what plant, animal or thing in the water has the same color, such as the green bead’s being the same color as sea grass. “They will learn about aquaculture and what it takes to keep the sea creatures healthy and happy, such as clean water and food,” she said.

At one of the dairy activity stations, livestock breeders, Chris and Valerie Quattlebaum, who own ACQ Pastures and Manasota Flooring, explained how butter is made. Each student was given a small cup with a lid filled with buttermilk, which they shook like they were playing musical maracas.

“We want them to understand that butter comes from an animal and not the grocery store,” Chris Quattlebaum explained. When the buttermilk solidified, the students, with some disbelief, tasted their handwork. “Kids love the hands on activities,” said Palmetto Elementary School teacher Cherelyn Bolt, who has been bringing her third-grade classes to Ag Venture for many years. “It gives them a chance to see and learn about agriculture.”

At the Ag and Baseball activity station, the students were shown how agriculture connects to baseball.Diane Ingram and Melissa Morgan, of the Manatee County Agricultural Museum in Palmetto, and Mandy Polson and Tori Chasey, of the Palmetto Historical Park, had a table full of agricultural products, such as wood, grass seeds, and leather, and the students were asked what each of those items has to do with baseball. 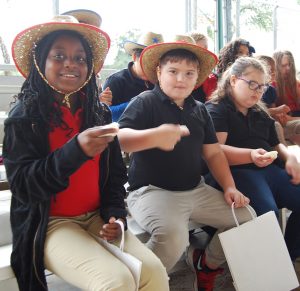 The students made the connections between the wood and the bat, the grass seeds and the outfield and the leather and the baseball mitt and then were allowed to take samples of those items and others home to teach their family.

Learning about soil and how plants grow was a popular activity station. Starter tomato plants were given to each student to take home and nourish.

Palmetto Charter School teacher Alexandra Laser said many of her students do not experience agriculture at home because they don’t have backyard gardens. “A lot of the students tell me throughout the year how their plant is growing,” said Laser, who has been bringing her students to Ag Venture for years. “Of course, not all of them survive, but one student’s plant produced a tomato, and he made salsa with it.”

Many of the volunteers helping out at Ag Venture were students from area middle and high schools and members of the 4-H Club and Future Farmers of America program. Haileigh Norris, a Braden River High School 11th grader, said she volunteered because she is active in the school’s Future Farmers of America Chapter. “If I were in the third grade, I’d want to have this experience and have a group leader to teach me,” Norris said. Having high school students help also provided good role models for the third graders, she said. 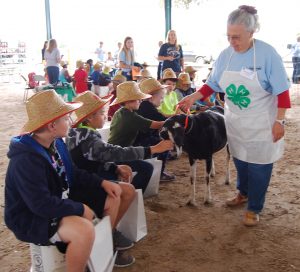 Judy Anderson, who has a goat farm in Frog Creek, allows these third-grade students to pet one of her goats she brought to the Farm-City Week Ag Venture event on Nov. 14.

Farm-City Week was filled with events and activities for the whole community. A popular event every year is the Farm-City Tour, which takes bus loads of participants to visit farms, ranches, packing houses and this year to Cortez, one of the last working fishing villages in Florida.

There are also speech contests for students in the sixth through 12th grades, a float in the Veterans’ Day parade in Palmetto, an informational booth at the Farmers’ Market on Main Street in downtown Bradenton and workshops and an animal show for beef producers.

Two separate luncheons are also held to honor the Agriculturalist of the Year and the 2019 Agriculture Hall of Fame inductee.