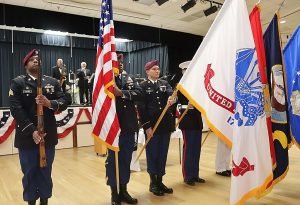 The MacDill Air Force Base Honor Guard opened the ceremony.

On Nov. 9, the Sun City Center Chapter of the Military Order of the World Wars (MOWW), hosted its annual Formal Veterans Ball at the Community Hall. All military and non-military residents were invited to the event
The ball featured a patriotic program, dinner, entertainment and dancing. Music was provided by the St. Denis Variety Band.
The invocation was given by retired USA Lt. Col. Bob Russell, and presentation of the Colors was provided by the Honor Guard from MacDill Air Force Base. The emcee for the event was retired USAF Lt. Col. Gordon Bassett. The Pledge of Allegiance was led by Russell, and the National Anthem was played by the band. Bassett presented the flag parade consisting of flag bearers from all five military branches.
Toasts were made to the Colors, the President of the United States, all the military services, POWs/MIAs, female members of the services as well as spouses. Retired USA Lt. Col Charlie Conover directed particular attention to the “Missing Man Table” that represents the MIA/POWs who never came home. Taps was sounded by a member of the band.
Following dinner, the 244th birthday of the USMC was observed by the SCC Leathernecks Club by the cutting of a ceremonial cake, the first two pieces representing the oldest and youngest Marines.
The Sun City Center MOWW Chapter meets (September through June) on the third Thursday of each month, starting at 11 a.m. in the Plaza Club, Freedom Fairways Golf Course, 3932 Upper Creek Road, Sun City Center.
For information on membership requirements, call Conover at 813-260-3257. 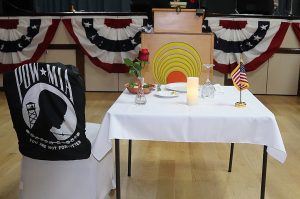 A missing man table is a ceremony and memorial set up in military dining facilities of the United States Armed Forces and during official dining functions, in honor of fallen, missing or imprisoned military service members. 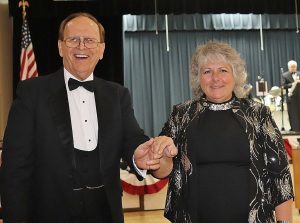 Veterans advocate Bill Hodges with Kelly Kowall, president and founder of My Warriors Place in Ruskin. 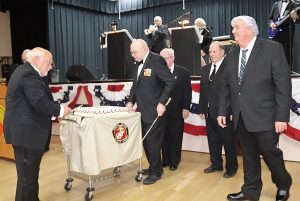 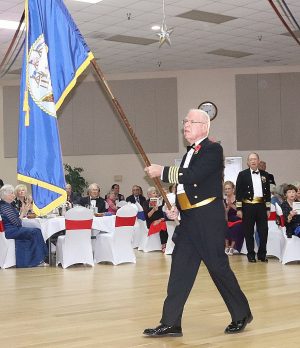