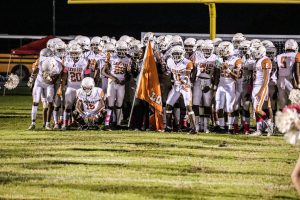 The Lennard Longhorns and the Riverview Sharks both experienced the bittersweet taste of the Florida State High School football playoffs last Friday night. They made the elite post-season brackets in Region 2, but received a quick ticket home in the one-and-done competition.
Both South Shore teams, riding the crest of winning seasons for 2019, hit the road Nov. 8 with high expectations. The end of the season came abruptly for both as Dr. Phillips, 9-2, eliminated Coach Matt Kitchie’s Longhorns 28-7 in Orlando. Likewise, Coach William Mosel’s Sharks fell to 8-3 overall, losing 58-21 to 3-seeded Osceola. The disappointing losses do not diminish the historic seasons both schools achieved for 2019. Lennard’s worksheet ends at 7-4 in its best season under Kitchie and first trip to the playoffs. Mosel’s Sharks also overachieved on the season, compiling a final 8-3 mark before being bounced last week.
In other first-round Region 2 games, the top-seed Riverview Rams of Sarasota whipped 8-seed Lake Nona 37-7. To make it a clean sweep for the favorites, 4-seed Steinbrenner rolled over 5-seed Newsome 49-20 on a wet Friday night under the lights in Central Florida.
Region 2 continues for the winners Nov. 15 as Riverview Sarasota clashes with Steinbrenner, and Osceola has a date with Dr. Phillips.
Lennard held heavily-favored Dr. Phillips scoreless until midway through the second quarter when the Panthers, now winners of 14 straight first-round playoffs games, basically put the game out of Lennard’s reach. Dr. Phillips woke up and socked the Longhorn defense with scores on back-to-back possessions to take a 14-0 halftime lead.
The host Panthers took advantage of 3 Lennard turnovers in the game. Dr. Phillips sealed the victory with a 32-yard punt return for a TD and a 33-yard rushing score in the third quarter to go up 28-0. Dr. Phillips leading runner, Brandon Fields, chalked up only 57 yards on 12 attempts, but it was more than enough as the Panthers stymied the Longhorns’ offense all night long in the drizzling rain. The Horns did not enter Dr. Phillips territory until late in the third quarter. Lennard only dented the scoreboard with 2-and-a-half minutes remaining in the game on a fumble recovery in the end zone by Kourtland Mitchell. Jocelyn Diaz booted the final extra point of her Cinderella-like career to make the final 28-7. Lennard’s tough runningback Tino Hunt led all rushers with 76 yards on 23 carries, as the senior concluded a fabulous career as a Longhorn.
Meanwhile, the Riverview Sharks shocked the Kowboys (with a K) at Osceola-Kissimmee on an 85-yard aerial bomb in the opening stanza to take a 7-0 lead. Osceola took little time to respond. The Kowboys racked up 2 quick TDs in the first quarter to terminate Riverview’s premature illusions of victory. The rout continued as Osceola forced rapid 3-and-outs on a sputtering Sharks’ offense.
Riverview could not stem the tide on defense, either. In quick fashion, the Kowboys rushed, passed, rushed and passed for TDs. Then, to rub salt in the Sharks’ wounds, Osceola drilled a field goal with less than a minute in the first half. By now, the score was 45-7 Osceola, and the Sharks were reeling from the onslaught. A last-second Riverview scoring pass made it 45-14 at intermission.
A running clock mercifully went into effect in the second half. Both teams tacked on meaningless scores to make the final 58-21. Osceola had 5 sacks and forced 2 fumbles to complement its relentless offense.