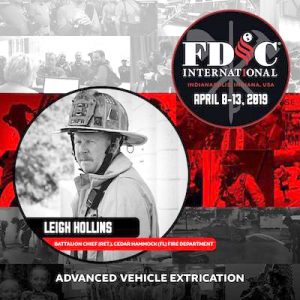 When the officials at Parrish Fire District needed to conduct an advanced vehicle extraction training exercise recently, Division Chief Michael Williamson knew whom to call.
Willamson turned to a nationally known training company, Starfire Training Systems Inc., to provide the specialty training.
Based in Manatee County, two local firefighters, Tom Hennessy and Leigh Hollins, started Starfire in 1993. “Tom was the fire marshal for Southern Manatee Fire Rescue at the time and was getting a lot of requests for training,” Hollins said. “And I was the training officer at Cedar Hammock Fire Rescue.”
So it was a natural fit for the two friends to begin offering specialty training to businesses, industries and public safety agencies. “We both had a lot of training,” said Hennessy.
According to its website, Starfire provides custom designed safety programs, taking into consideration employee job duties and the safety policies.
For businesses, Starfire provides classes that teach CPR and first aid, how to use a fire extinguisher, proper building evacuation procedures, safety precautions for blood-borne pathogens, fitness and nutrition.
Starfire instructors teach specialty classes covering Occupational Safety and Health Administration requirements for industrial companies, along with fall protection, air monitoring, lock out/tag out procedures, hot work safety for welding and training of fire brigades and fire prevention.
“We did a lot of safety training for Tropicana,” Hollins said. “They have been a client for 25 years.”
Public safety agencies, such as the Parrish Fire District, need more subject-focused classes, and Starfire instructors are able to provide them.
Firefighters and other first-responders learn basic and advanced vehicle extrication techniques, firefighting tactics and strategies, high-rise firefighting and the incident command system, to name a few.
At the Parrish Fire District training on Oct. 16, area firefighters and emergency workers from the Parrish Fire District, Manatee County Search and Rescue, Duette Fire Rescue and Nokomis Fire Department spent two days in the classroom and out in the field with hands-on experience using a variety of hydraulic tools and saws, such as the Jaws of Life.
About 10 junked vehicles were placed in dramatic accident positions behind the fire station at 12132 U.S. Highway 301 in Parrish for the trainees to practice the advanced training.
Twenty-six years ago, a back yard fire ignited Hennessy and Hollins’ long friendship. “I was a lieutenant on an engine at Oneco/Tellavast Fire Department,” Hennessy said, “and we got a call about someone burning in their backyard. When I pulled up, there was this guy sitting in his hammock having cocktails” with a big fire burning, he said.
It was Hollins, but having never met him, Hennessy did not know he was a firefighter.“You have to put that fire out,” Hennessy said to Hollins.
Hollins replied, “You want it out; put it out. You have a hose on that truck.” Hennessy had the firefighters drag the truck hose into the backyard and doused the fire.

“We met later at an area firefighting event, and I reminded him about putting out the fire for me,” Hollins said with a smile on his face. “Then I was doing a training event with the Hazardous Material Team, which Tom was heavily involved with, and after the training Tom said, ‘Let’s go and have a beer,’ and we talked about starting the business.
“That was 1993, and we started Starfire,” Hollins said. “Tom went on to become fire chief (of Southern Manatee Fire Rescue) in 2001, and I continued my career at Cedar Hammock as battalion chief; then Tom retired in 2009, and I retired in 2103.”
Hollins said that between 1993 and 2013 their company took off. Tropicana was a major client of Starfire from just about the beginning. “At Tropicana we taught the OSHA required courses,” he said. “Tropicana had to meet a certain status for safety and training for a five-star rating for insurance.”
Tropicana was in Oneco-Tellavast Fire District, and as fire inspector, Hennessy would have to go there and meet with the company safety director. “I remember being invited to a safety class at Tropicana, and their instructors were out of New Jersey where Tropicana had an office,” he said. “They would send a shirt-and-tie guy to teach this confined space class, which was only 2-3 hours, and I sat in (on) that class and said Starfire can teach these classes for half the amount of the money.
“And what we brought was real. We were line officers in the field, so we had stories; we had slides; we had videos. And they just loved us,” Hennessy said. “That was the lure to bring us back because we were cheap; we were local; we were on the job; we weren’t insurance people trying to come off as emergency workers.”
Getting Tropicana as a client was a big plus, allowing the company to take off, but about three years later Hennessy and Hollins got another big break. “We got involved with the world’s largest firefighters conference, called the Fire Department Instructors Conference (FDIC),” Hollins said.
FDIC is held in Indianapolis annually, drawing more than 35,000 fire and rescue professionals from the United States and around the world. Along with classroom instruction and an exhibition of products and services at the conference, there are several days of hands-on training. 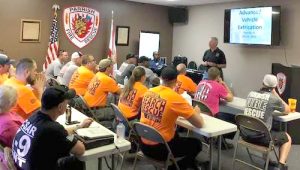 “In 1996 I got on the editorial advisory board (of FDIC) and started teaching there every year doing vehicle extrications hands-on training,” Hollins said. “I’ve been on the editorial advisory board ever since, and Tom and I have taught there all those years.” This April will be Starfire’s 24th year of teaching hands-on extrication at FDIC.
Over the years of doing the training at FDIC, Hennessy and Hollins would get jobs from all around the country to teach one or two days of school bus extrication, heavy truck extrication and advance extrication skills.
“At the FDIC we had access to the world’s best instructors in various types of techniques, whether it be in heavy truck rescue or confined space or structure fires,” Hennessy said. 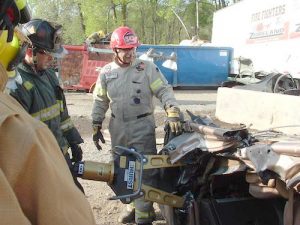 PROVIDED PHOTO
Tom Hennessy, who left the specialty safety and fire-rescue training company Starfire Training Systems Inc. to Leigh Hollins when he retired, teaches one of his last classes on advanced vehicle extraction at the Fire Department Instructors Conference in 2010.

“We had access to a lot of the New York people, and with Leigh and I being from New Jersey and New York, we know a lot of Northeast people, especially a lot of guys from New York, so we were be able to bring in expert instructors to assist in the training.”
Hennessy came to Florida from New York in October 1979 because he knew some friends who were with the Sarasota-Bradenton Airport Fire Department, and they suggested to him to come down. “I started with Sarasota-Bradenton Airport Fire Department in November 1979,” he said. “I was there for only 18 months.
“They put me through the fire academy and Emergency Medical Training school and it was about the most boring job you’d ever want,” Hennessy said. “It wasn’t an international airport at the time, and it was only opened for 18 hours.
“As soon as I came out of (the) fire academy, I knew that was what I wanted to do,” he said. “So I hooked up with the local volunteer fire department, which was Oneco/Tellavast, (during his time off from the airport fire department) and would hound the chief every day to make me fulltime,”
He was hired fulltime at Oneco-Tellavast, and he quit the airport department. “And I stayed (with Oneco-Tellavast) for the next 28 years,” Hennessy said. He advanced through the ranks and in 1992 became deputy fire marshal.
In 1993 Oneco-Tellavast merged with Samoset Fire Department, changed the name to Southern Manatee Fire Rescue, and Hennessy became fire marshal in 1994. He was hired as chief in 2001 and retired from active firefighting in 2009. Hennessy retired from Starfire in 2016, leaving Hollins with the business.
Hollins comes from a family of firefighters. “My dad’s uncle was a firefighter for Trenton, N.J.,” he said. “And my family were all volunteer firefighters in Hamilton Square, so when I turned 18, I joined the volunteer fire department there.
“Dad was active in that volunteer department for about 40 years and was chief for 3 or 4 years; then he moved to Florida,” Hollins said.
Hollins moved to Bradenton in 1977. “I came to Florida for better opportunities here,” he said. “I got on at the Whitfield Fire Department for a couple years.”
At the time there was a government training program called the Comprehensive Education and Training Act, which Congress passed to train young men and women for an occupation. Whitfield Fire Department, which was a volunteer department, took advantage of that program and hired Hollins, sending him to fire school.
“I stayed with them until late 1978, and the City of Bradenton hired me to be a firefighter there, and I was at Bradenton from 1978 to 1983,” Hollins said. “In 1983 I went to Cedar Hammock as a firefighter, was promoted to lieutenant in 1985, captain in 1989, training director in 1991 and battalion chief in 1996 on the C-shift for 10 years.
Hollins spent 30 years with Cedar Hammock; the last seven years he was back as training officer. He retired from firefighting in 2013. “Tom got out of (training with Starfire), and I kept doing it with a crew, and in April will be our 24th year of teaching hands-on extrication there,” Hollins said.
For more information about Starfire, visit its website at www.starfirets.com.
To learn more about the Fire Department Instructors Conference, check out its website at www.fdic.com. 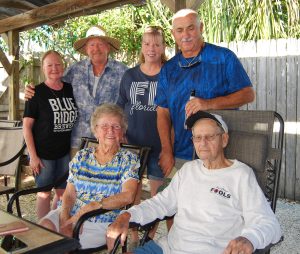