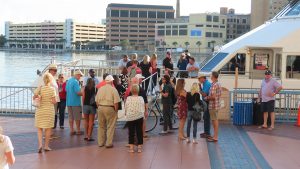 BILL HODGES PHOTO
A Cross-Bay Ferry excursion, just prior to its third season kickoff, showed passengers the Big Bend and MacDill terminal sites included in a plan for year-round service that adds those ports. County Commissioners turned the proposal over to Hillsborough Area Regional Transit Authority (HART) in August.

The 117 passengers — all with South Hillsborough County interests — aboard an Oct. 30 courtesy Cross-Bay Ferry now have a better understanding of the permanent, year-round ferry service being proposed. The service would expand the seasonal service (November to April) now running from the Tampa Convention Center to the Vinoy Yacht Basin in St. Petersburg. That service runs Wednesday through Sunday, plus days that Tampa Bay Lightning will be playing at home.
The courtesy cruise aboard the 145-passenger vessel was sponsored by HMS Ferries. It departed from the Tampa Convention Center to the Big Bend coastal area to check out the proposed ferry terminal site there, then ferried to a proposed MacDill AFB terminal location before returning to Tampa.
While aboard, HMS Ferries President Matt Miller and Ed Turanchik, an HMS legal advisor and a long-time transportation advocate, provided details and answered questions about their vision of the expanded service.
Miller talked about the HMS operations in other areas and affirmed the HMS commitment to Tampa. He said HMS will cover operational costs with no further subsidy for four boats running every 15 minutes. It would be a 15-minute ride from Big Bend to MacDill and a 25-minute ride from Big Bend to St. Petersburg. Neither Miller nor Turanchik hid their frustration that the proposal wasn’t moving more quickly. “We have done everything we can do to move things forward,” Miller said.
A decision made by the county commissioners in August placed the proposal in the hands of the Hillsborough Area Regional Transit Authority (HART). A list of the HART members, which includes some county commissioners, can be found on the HART website at gohart.org.
It appeared to be the consensus among the passengers that expanding service into south Hillsborough County and to MacDill would be a good move. A major factor in the plan is that Mosaic is offering to donate land required for the Big Bend terminal with 1,250-parking spaces and roadway access.
Proponents say that the four-terminal, year-round service would appeal to the thousands of MacDill military and employees as well as other commuters to Tampa and St. Petersburg.
Sam Sudman, Sun City Center Community Association president, who supports the concept of making commuting easier for military personnel living in the South Shore area, was on the October 30 courtesy cruise. Environmental activist Melanie Higgins, also a passenger, says it is a no-brainer to use Tampa Bay’s waterways any way we can to get more cars off the highway. That sentiment was echoed by many.
The Tampa-St. Petersburg ferry service is a public-private partnership between HMS Ferries and the cities of St. Petersburg and Tampa, Pinellas County, Hillsborough County and the Florida Department of Transportation. Its first year attracted 38,000 passengers; last year, the total reached 53,000, and they expect up to 60,000 this year. Adult tickets are $8 each way, with discounts for passengers age 65-plus, active or retired military, college students and minors. Visit www.thecrossbayferry.com for schedules.