Riverview in first round of revamped playoffs

The Sharks concluded a highly successful 8-2 season Oct. 25 beating Lennard 28-22 to snare its playoff bid. The Sharks are sparked by Gage in the rushing and passing department. He is receiving plenty of offensive support from Devin White, Cheyenne Greaves and Kadeen Robinson. 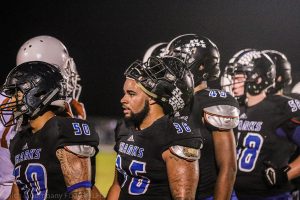 The defense is led by Devin White with 7 interceptions. Leading tacklers for the Sharks are: Doby, Greaves, Kellman, White, Robinson, Serra, Hussey, Marshall and Mariscal among other swarmers on defense. The Sharks have put 300 points on the scoreboard and coughed up 191 points in 10 games.

The other South Shore team, East Bay, put up a good fight, but fell in its season finale 25-21 to the 8-2 Bloomingdale Bulls last week. For the 2-8 Indians under Coach Frank LaRosa, it concludes a disappointing season, record-wise, and two exciting last-minute victories.

In other Class 8A Region 2 playoffs this Friday night, Lennard is at Dr. Phillips and Newsome, 8-2, travels to Lutz for a date with 9-1 Steinbrenner. Top seed Riverview Sarasota, 8-2, hosts 8-seed Lake Nona.

The new format for the state playoffs now places more emphasis on wins, mainly against quality programs. In 2016 the Florida High School Athletic Association established a new playoff system. The new formula is based largely on RPI (ratings percentage index), which measures a team’s wins as well as the winning percentage of its opponents. District champs in Classes 5A-8A get the top seed in each region.

How do you lead?