How do you lead?

So what do you think? When talking about great leaders, which philosophy passes the muster? Leading from the front or from behind? We all find our ourselves in leadership roles: At work, in a volunteer position or even at church. Woohoo! You’re the lucky leader. So now what? What works best?

Leaders who lead from the front are usually leading by example. They tend to demonstrate what needs to be done. And they don’t just want their staffs to do that task. The good leaders not only tell you what needs to be done, but they know how to do it themselves. They’re not afraid to get their hands dirty. Conventional wisdom says when there’s a crisis, you need to lead from the front. And it’s not about being the big shot or being in charge. It’s about being the glue that holds everything together and protecting the rest of the team from the worst parts of the crisis unfolding right in front of you.

The late Nelson Mandela talked about the importance of leading from the back in his 8 Lessons of Leadership. So when is it best to lead from behind? It does sound counterintuitive. How can you lead if you’re behind the group? Apparently, you lead from behind when you’re winning. Rather than resting on your laurels just coasting along during the good times, give some of your team members the chance to flex their leadership muscles. To use a sports analogy, if you’re winning 100 to 0, you don’t need the first string. Put in the guys who never get the chance to get on the field. 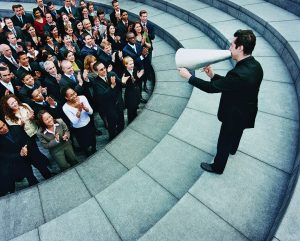 Now that you’ve probably determined what works best for you, there is a third option: Leading from the sidelines. Yep, it is a thing. This becomes important to managers who fail to delegate. I’m sure we’ve all thought, it’s just easier and faster to do it myself. Not good. To get out of that space, you gotta move to the sidelines. You need to move out of the way, and let others move forward. This can be scary since you, as a leader, are responsible for all outcomes good or bad.

Hmmm. That’s a lot of food for thought. All this talk about leadership makes me think about the importance of teamwork. But that’s a whole other column. I’ll get started working on it.

Lynne Conlan is Executive Director of the Sun City Center Area Chamber of Commerce. Call her at 813-634-5111, or email lynne@sccchamber.com.