If you’re in the mood for some good laughs, the Pelican Players’ production of the farce “Boeing Boeing” will be a great way to start the holiday season. 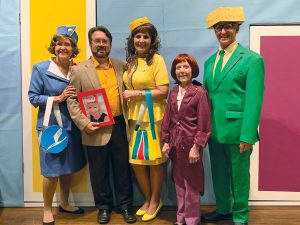 Written by French playwright Frank Camoletti and translated by Beverley Cross, “Boeing Boeing” is set in the early 1960s. It centers on architect Bernard Lawrence, an American playboy based in Paris. He is engaged to three different stewardesses from three different airlines, and none of the women know about each other. Each one of their flight schedules bring them home at different times, and Bernard’s live-in maid, Berthe, helps him keep the ruse going.

That is, until a sudden change in scheduling finds all three ladies home at the same time, and Bernard’s longtime friend Robert arrives in town unexpectedly.

“The moment I heard about “Boeing Boeing,” I knew I would love it,” said Director James Williams. “As I read the script, I began creating a vision for the show and integrating my 25 years of airline experience into it.

“‘Boeing Boeing’ is the epitome of fun, and with fun comes lots of laughter,” he said. “I just knew the audience would love it.”

Tickets for the evening performances are $15, and $12 for the two daytime matinees. They can be purchased at the Kings Point box office, 1900 Clubhouse Drive, from 9 a.m. to 4 p.m. weekdays. A limited number of tickets will be available at the door. The shows are open to all residents of Sun City Center and surrounding communities. 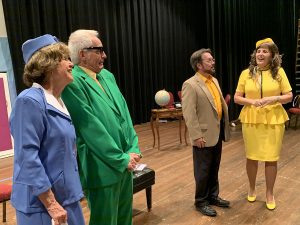 LOIS KINDLE PHOTO
Pelican Players cast members rehearse a scene from “Boeing Boeing,” a comedy to be presented Nov. 14 to 16 at the Kings Point Veterans Theater.

Seating is cabaret-style for the two hour, three-act show, with a 15-minute intermission. Bleacher seating is available for those who prefer it. Patrons may bring food and beverages, including alcohol.

The Pelican Players is a 501(c)3 community theater group founded in 1980. Proceeds from its stage productions, free Readers Theater, for-hire murder mystery dinner theaters and Cabaret Singers provide scholarships to Hillsborough County students going into the arts. Since its inception, the group has awarded more than $600,000 in scholarships.

The theater group is always looking for actors, stagehands and others willing to help with set design or costuming. Experience is helpful but not required, and all area residents are invited to participate and join.

For more information on the Pelican Players, visit www.pelicanplayersscc.org or call 813-633-7681.