Setting the bar for charitable giving 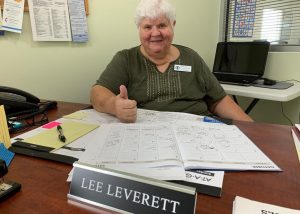 She donated $1,000 to the nonprofit organization’s Grand Donor Medallion memorial to celebrate what would have been Mafale’s 99th birthday and also to thank Samaritan Services for its invaluable contributions to the Sun City Center community.

“My husband drove several years (both in town and out-of-town) for Samaritan Services, and he absolutely loved it,” Pitzer said. “He always came home with a smile on his face.

“I wanted to elevate the thought that it’s fun to volunteer,” she added. “And I want to encourage people to become Samaritan Services drivers and to donate. It’s a wonderful source of free transportation in Sun City Center for those residents who can’t drive.”

Mafale was a World War II veteran who felt an obligation to help others and that he was responsible for creating the kind of life he himself would eventually need, Pitzer said.

He believed that a senior’s quality of life was dependent on volunteer services established within the community, not on outside organizations.

“That’s why Joe chose to do volunteer work,” she said.

“Joe was one of the nicest drivers we ever had,” recalled Doris Ragland, one of Samaritan Services’ founding members and its longtime president (until 2016). “He never got flustered; he was so compassionate, helpful and friendly. He was a true asset to our organization.”

Samaritan Services wouldn’t exist but for the generosity of others.

“We wouldn’t be here if people didn’t have the heart to donate their time, talents and financial support,” said Lee Leverett, Samaritan Services president since 2016 and one of its volunteers since 2002. “Our mission is to keep people independent in the community.” 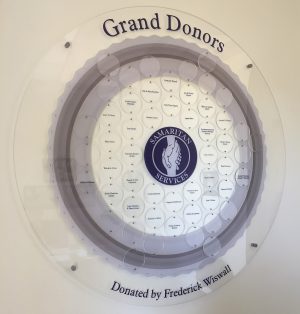 LOIS KINDLE PHOTOS
The Grand Donor Medallion is a Samaritan Services memorial to people who have donated at least $1,000 or an aggregate of $1,000 over the course of one year to the nonprofit organization.

The Grand Donor Medallion hangs in the foyer at the entrance of the Samaritan Services building. The large, $3,500 circular wall plaque was donated by Fred Wiswall about a year before he died in 2015. That was the same year Samaritan Services moved into its own standalone building at 127 N. Pebble Beach Blvd., Sun City Center.

Presently, there are 35 smaller “medallions” on Grand Donor Medallion, representing 35 people who have donated at least $1,000 or an aggregate of $1,000 over the course of one year.

There is room for 15 more before it’s filled, and side panels will be added for future donors.

Except for a few grants from organizations like the South Shore Council of the Community Foundation of Tampa Bay, all funds Samaritan Services receives are through donations from individuals and various community clubs.

Every dollar is needed.

It costs close to $150,000 in annual operational costs year to do this, covering expenses like gasoline, automobile insurance, vehicle maintenance, tolls and utilities. Gasoline alone currently averages $1,000 per month.

If you’d like to help, return the appeal envelope recently mailed throughout the community or call 813-634-9283. For more information on the Grand Donor Medallion or to volunteer as a driver, call this same number.