The Friends of the History Society of Greater Sun City Center made an interesting proposal at the October board meeting of the SCC Community Association. They are asking the CA to convert a building it owns at 1002 Cherry Hills Drive into a museum and history center. The Friends’ group would provide funds to maintain the museum. 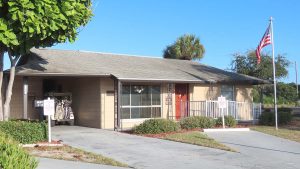 BILL HODGES PHOTO
The Friends of the History Society of Greater Sun City Center are proposing this building on the CA Central Campus be utilized as a museum and history center.

The History Society of Greater Sun City Center had its beginning in 2000 when the CA directors formed a Community Archives Committee to collect and preserve documents and memorabilia tracing the community’s history. That committee continues to function with John Bowker as president.

The Friends group was formed in February 2018 as a CA club and now has around 100 members. Its purpose is to provide financial support and manpower for the society’s projects. The volunteers, all supporters of preserving the community’s development history over the past 60 years, are led by President Susan Muise.

Muise and the Friends’ members recognize that the proposal for a stand-alone museum and history center is ambitious — but necessary; the space they have now is just too small. Muise said they are excited about the possibility of creating displays for the community and having a place to store the historical artifacts and records collected. “Don’t forget, history doesn’t just stop; it will continue on,” she said. “We are getting so many people wanting to know more about the history of Sun City Center. Some have volunteered to help with research, but we do not have adequate space for them to work.” 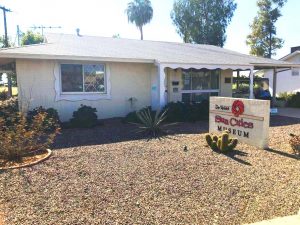 Bowker has always thought the Cherry Hills building is an obvious choice for a museum because of its historical significance as one of the first houses Del Webb built here in 1961. Bowker has visited the Del Webb Sun City, Ariz., community and was impressed by the accomplishments of the history preservation group there. The Arizona museum is in a house that is almost identical to the Cherry Hills house.

In 2004, when the CA purchased the Cherry Hills property, the intention was to establish a SCC museum and history center. The museum never materialized but the History Society did occupy an office there, sharing the space with a newly created Information Center. In 2015, a new building was built at the corner of Cherry Hills and Pebble Beach Boulevard North to house the Information Center, History Society office and storage vault. The Cherry Hills house is now occupied by the Men’s Club Lifeline group, Disabled American Veterans office and a meeting room.

The Friends’ proposal for a museum is now in the hands of the CA’s nine-member board. Sam Sudman, president, said it will be considered with all other project requests and considerations for new construction and utilization of existing space as the Long-Range Planning Committee completes its charge and presents its findings to the board.

A ‘November to Remember’