For Francesco LoGrande, family is everything, and he makes sure that his customers at Ferraro’s Italian Grille are treated like family.

LoGrande’s two sons, Salvatore and Anthony, help him run his restaurant at 8348 U.S. 301 N. in Parrish, and they follow their father’s tradition of knowing their customers on a personal basis.

“It’s not like a franchise where you’re just a customer,” Salvatore said. “They’re all friends from the community which supports us. 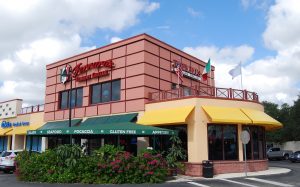 “They took us in and always have our back,” he said.

Living in the community, and knowing your neighbors is a big part of the LoGrandes’ success.

“We all live in Parrish, close to work,” said Francesco, or Frank as his friends call him. “We know all the people that come to eat here; we’re friends.”

The employees at Ferraro’s are like family, too, he said.

“All the people who work here are all local,” Frank said. “Some started working with us while in high school as their first job.”

And those who go off to college return to work on their school breaks, said Salvatore, Sal to his family and friends.

The LoGrande family opened their Parrish location in November 2009 and will celebrate the 10-year anniversary by giving back to their customers who have supported them.

“We’ll do something special for our customers,” Frank said. 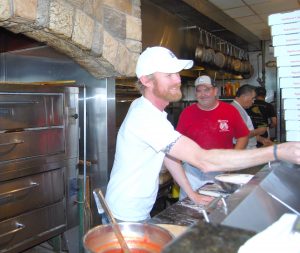 Ben Tindale, left, a cook at Ferraro’s Italian Grille, 8348 U.S. 301 N., Parrish, prepares a pizza order for a customer. Cook Rob Gordon is in the background.

And his customers have shown their appreciation by consistently making Ferraro’s a “Best Italian Restaurant” finalist in several newspaper polls.

With everything on their menu made fresh, that was not hard to accomplish.

They even make their own mozzarella cheese.

“It costs a lot of money to make fresh, that’s why a lot of places don’t do it,” he said. “It’s better fresh.

“We don’t buy food a week ahead of time,” Sal said.

The Italian tomato sauce also is made fresh every day, and a batch of pizza dough is made two or three times a day.

“We use all the best ingredients in everything,” he said. 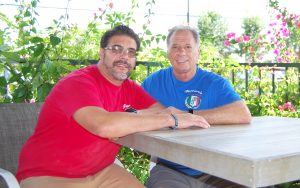 The menu at Ferraro’s has a large selection of Italian fare, from eggplant rollatini to lasagna to veal Marsala.

You can order a variety of pasta shapes with your choice of sauce, such as rigatoni à la vodka, cheese ravioli topped with marinara, or fettuccini Alfredo.

And, of course, there’s Ferraro’s delicious pizza. The pies come in three sizes, 10-inch, 14-inch, or 16-inch with a list of toppings.

A full menu board of sandwiches also is offered, from traditional sausage and peppers to hamburgers.

And if there’s a special dish request, no problem, Sal said.

“We accommodate everybody,” he said. “If they come in and say, “My grandmother used to do this,” we try to make everybody happy.”

The LoGrande family is very community oriented, since they all live within five minutes from the restaurant.

“All our kids go to school here,” said Sal. “They play sports here.” 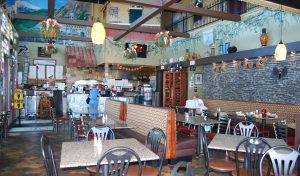 And they support the local schools.

“We became involved in Parrish Community High School right away,” he said. “They have their games on Thursday, and we feed their football team every home game.

“And all the elementary schools (in the area) have “spirit night” or back-to-school night where people who come into the restaurant with a flyer (from that school) have a portion of their bill given back to the school.”

Every other month is a different school. Virgil Mills Elementary School was last month and Parrish Charter School will be next.

“We worked out a schedule with the PTAs or PTOs in the summer,” Sal said. “We give them a check and they use the money for something at the school.”

And as an incentive, the class with the most participation gets a free pizza party in their classroom.

“Anthony came up with that,” LoGrande said. 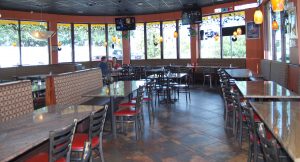 The large dining room at Ferraro’s Italian Grille, 8348 U.S. 301 N., Parrish, has a bank of windows to let in all the natural light.

They also are big supporters of law enforcement officers and first responders, along with military veterans.

All are given discounts on their meals.

“We have friends who belong to Law Enforcement United,” Sal said. “We’ll do a benefit at the restaurant and there’s always a big crowd.”

The national organization raises money to honor law enforcement officers who have died in service and also help their surviving families.

Frank, 66, always has worked in the food business.

“I worked at a supermarket in Brooklyn (while in high school and college),” he said.

He moved to Brooklyn, N.Y., as a teenager in 1968 from the small town of Bisacquino in central Sicily. 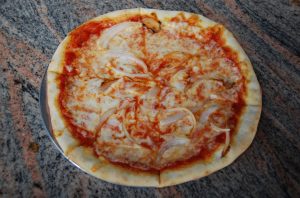 After marrying his wife Frances, who is from Palermo, Sicily, they moved to New Jersey to help her parents in their restaurant in Woodbridge.

Along with their sons, Sal and Anthony, Frank and Frances LoGrande have a daughter, MariAngela Pacheco, along with seven grandchildren – six boys and one girl.

“We came for vacation and never went back,” LoGrande said. “We wanted to get away from the restaurant business, but after a few months we didn’t know what else we could do.

“We’ve been doing this for 45 years,” he said, “so we might as well stick with something we know how to do.”

They opened a restaurant in Punta Gorda right after Hurricane Charles ripped through that city in 2004.

“It was breakfast, lunch and dinner, and was called Burnt Store Grille for the area where it was located,” LoGrande said. “We never did a breakfast before, but we took a chance.”

But they were living in Sarasota and it was a long drive to Punta Gorda everyday. 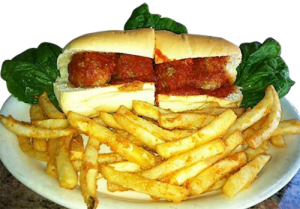 They sold the Punta Gorda restaurant and opened Ferraro’s in downtown Bradenton in 2007.

One of the restaurants they owned in New Jersey was named Ferraro’s, so when they opened the Bradenton location they used that name.

They opened their second restaurant in Parrish in 2009, with Frank and Anthony operating that location and Sal LoGrande running the Bradenton restaurant.

Many of the customers from the downtown Bradenton location followed them to the Parrish restaurant.

“When we had both restaurants, they’d have lunch downtown and then dinner here because they lived out here,” said Sal.

The family sold the Bradenton restaurant in 2015.

They also have a lot of regular customers from Sun City Center, Ruskin and Riverview.

The LoGrande family says they owe their success to hard work.

“A restaurant is a commitment,” said Frank LoGrande. “And you have to have a background in food to be in the restaurant business.

“Then you have to find reliable people to work for you,” he said.

It also helps to have the family involved.

“We are as successful as we are because there’s three of us,” Sal said. “Someone from the family is always here.”

He said a restaurant is not a business for everyone.

“A lot of people come here from up North and eat at a restaurant and right away they get an idea to open a restaurant because they think it’s easy, but they don’t know about our seasons,” said Frank, agreeing with his son. “They come here in the winter when everyone is slammed, then May comes around and places are empty.”

He said there are a lot of differences between running a restaurant in Florida and New Jersey.

Frank remembers working late nights in his in-laws’ New Jersey restaurant, which would open at 10:30 a.m. and close after midnight.

In New Jersey people would stay out later so they would keep the restaurant open later.

For more information about Ferraro’s or to order take out or delivery, call 941-723-1111. For a menu, go to the restaurant’s website at www.ferrarositaliangrille.com

To learn more about the Law Enforcement United organization check out its website at www.lawenforcementunited.com.

Trick or Treat Street another success

Get tickets NOW – Breakfast with Santa