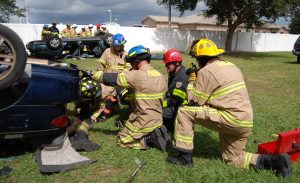 About 15 trainees from the Parrish Fire District, Manatee County Search and Rescue, Duette Fire Rescue and Nokomis Fire Department spent two days in the classroom and out in the field with hands-on experience using a variety of hydraulic tools and saws, such as the Jaws of Life.

About 10 junked vehicles were placed in dramatic accident positions behind the fire station at 12132 U.S. 301 in Parrish for the trainees to practice the advance training.

This was the first time retired Cedar Hammock Fire Rescue Chief Training Officer Leigh Hollins offered this course outside of the Fire Department Instructors Conference in Indianapolis, where he has been teaching it for two decades.

“Parrish’s demographics are changing,” Williamson said. “We have about 30 miles of highway in our district, and with more traffic comes more accidents and they’re more violent.” 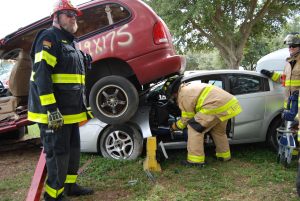 Hollins, who now owns Starfire Training Systems Inc., which provides custom safety training courses, said the trainees learned advanced techniques of extrication for vehicle crashes that are not the norm.

“Time is always an issue,” he said. “We’re teaching the most effective and quickest way.”

Williamson said he wanted to thank Myakka Towing, All American Towing and Woodruff & Son’s Construction for all of the donated vehicles and the logistical placement. 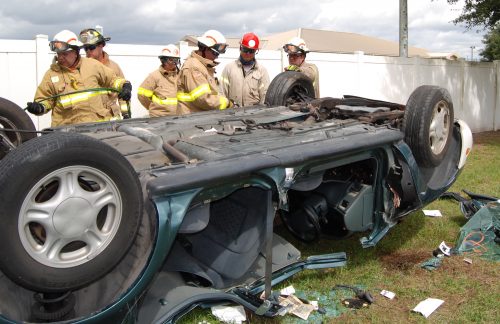