Coach William Mosel and his Sharks snatched a 20-18 roller coaster victory at the expense of Ridge Community on a soggy field in Davenport last Friday night. The win over the Bolts leaves the Sharks at 7-2 heading into this Friday night’s rival game with the 6-2 Lennard Longhorns at Riverview. Both Mosel and Coach Matt Kitchie of the Longhorns are enjoying career-best seasons at their respective high schools as the two neighboring rivals prepare to clash. 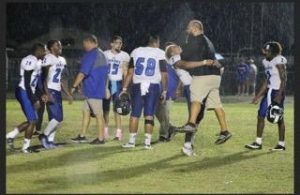 Star Sharks sophomore QB #2 Stazion Gage tallied Riverview’s last score of the game on a short sneak with seven minutes left in the fourth quarter. The Sharks went for two and failed but no matter as the Riverview defense held on for the 20-18 comeback win.

Riverview’s #6 David Hayes scored on the Sharks’ first possession to open the game under severe weather conditions. The wet, slippery ball was on the ground several times during the Sharks offensive series. Riverview made its first extra point attempt, which was to prove crucial as the game went on.

The Bolts responded by scoring twice and both PAT attempts were blocked by the Sharks’ special team. The Sharks went into the half down 12-7. Ridge Community stretched its lead to 18-7 with a third quarter TD, but missed again on the extra point attempt. The Bolts scored and went for two, but the Sharks came up with a big stop to keep the game at 18-7. Riverview cut that margin with minutes remaining in the third quarter as the Sharks’ Hayes scored his second TD and Riverview made its PAT to put the scoreboard at 18-14. Riverview came into the fourth quarter facing a 4-point deficit. The Sharks took care of that, as Gage hit pay dirt with seven minutes left in the game. 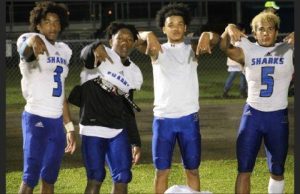 The Sharks defense was energized and made some big plays down the stretch. With three minutes left in the game, the Bolts were charging down field on a potential go-ahead drive. On third down and long, the Bolts took a shot at the end zone. The Ridge Community QB gambled and lost, as his pass was intercepted by Sharks #3 Devin White. Dashing 95 yards for what appeared to be a pick-6, White’s score was negated by a block in the back but the Sharks retained possession.

Leading by two, the Sharks had the ball with 1:10 on the clock. They ran one play and took two kneel-downs and the game was over.

The Riverview defense led the charge in Friday’s victory. #5 Isiah Doby and #14 DJ Kellman, both with over 80 tackles on the year, had strong performances. #4 CB Kadeem Robinson had at least 5 tackles on the night. #3 Devin White captured his seventh interception, the most in the Tampa Bay area this season. #34 James Moore displayed consistency and tenacity throughout the game, holding the Sharks’ defensive front intact at the line of scrimmage.

After posting a 4-6 record in 2017 and going 3-7 last season, Mosel and his Sharks are guaranteed of their first winning season in at least 10 years.

The last time the Sharks and Lennard Longhorns met was in 2016 with Riverview winning 28-10 to even the all-time series at 2-2. They meet this Friday night in Riverview.