Members and guests of the First Born Church of the Living God are expected to attend the first diocesan assembly ever to be held in Manatee County. 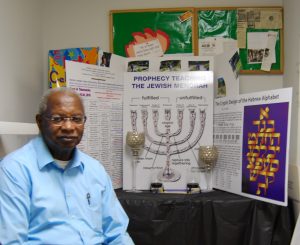 CARL MARIO NUDI PHOTOS
Greater South Florida Diocese Interim Bishop Lawrence Livingston sits in front of a display explaining The Cryptic Design of the Hebrew Alphabet and The Prophecy Teaching of the Jewish Menorah in a classroom of the Eternity Temple of the First Born Church of the Living God in Palmetto.

“We’re expecting hundreds to attend,” said Interim Bishop Lawrence Livingston, who was pastor of Eternity Temple, a First Born congregation at 716 29th St. E., Palmetto, until he recently was promoted to interim bishop of the Greater South Florida Diocese.

This is the first time in the diocese’s 70-year history that the annual assembly will be held in Manatee County.

The assembly will draw congregants from the 16 First Born churches in the six-county area of Manatee, Sarasota, Hillsborough, Polk, DeSoto and Lee.

Livingston said he rented the facilities of Increasing Joy Ministries, not a member of the 160-church First Born denomination, because it can accommodate up to 350 people.

“I would like to fill that church,” he said.

The main theme of the assembly will be “A Kingdom of Priests,” which will be about the royal priesthood.

“Moses was the first chosen priest and then his brother, Aaron,” Livingston said, “And out of them came the Levites.

“You had the priests, and you had the Levites,” he said. “In today’s vernacular you would have the bishops and the pastors.” 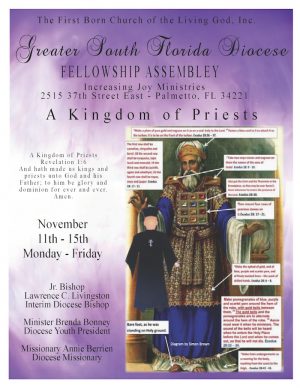 Livingston said if you follow this message, this is the basic Bible message all the way through the scriptures.

“And when Jesus came to fulfill this,” he said, “He didn’t come from the Levite tribe; He came after Melchizedek.”

The Junior Bishop explained the scriptures in Genesis, Psalms, and Hebrews, about Melchizekek do not refer to his parents.

“It doesn’t say he was born or that he died,” Livingston said. “He’s an enigma for a spiritual God-ordered person.

“That would make the work of Jesus, not having a parent, per se, until God married Israel,” he continued. “With God as His Father, and Israel His Mother.”

At 6 p.m., Monday, Nov. 11, the Diocese Youth Meeting will start with a workshop focused on getting young people involved in church ministries. A worship service will follow at 7:30 p.m.

Livingston said one way he got youth involved in the church was during the worship services at Eternity Temple he had the young people read from the monthly prayer booklet Our Daily Bread.

“I have the youth read the Sunday lesson from the booklet to the congregation during services,” he said.

The next evening at 6 p.m., Tuesday, Nov. 12, the theme for the Diocese Women Workers’ Meeting will be “mission purpose.” A worship service is to follow at 7:30 p.m.

The third session of the assembly will be for deacons and deaconesses and will start at 6 p.m. Wednesday, Nov. 13, with a worship service to follow at 7:30 p.m.

The pastors, elders, and ministers session will begin with Holy Communion at 6 p.m. Thursday, Nov. 14, with Presiding Senior Bishop, Titus B. Deas, Jr. preaching during a worship service at 7:30 p.m. 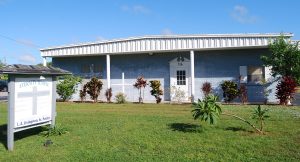 Bishop Deas was the head of the Greater South Florida Diocese before being elected to the presiding bishop position at the Mother Church in Waycross, Ga.

The last meeting at 6 p.m. Friday, Nov. 15, will be the All Saints session, with a Priestly Endowment Hour, followed by a worship service at 7:30 p.m.

Livingston said the public is invited to attend the assembly sessions and worship services.

The First Born Church of the Living God was founded in 1913.

According the church’s website, it is “the practice of this church to ordain Bishops, Elders and Deacons, to license male and female ministers, to administer the Lord’s Supper, accompanied by feet washing as administered by Christ Himself and practiced by the Holy Apostles; to perform marriage ceremonies and permit divorces on Bible grounds; to conduct funerals and bury the dead; to extend charity, stimulate education, fight vice and wickedness and to guide humanity in its search for a full, rewarding life through a complete surrender of Jesus Christ.”

Livingston and his family founded the Eternity Temple First Born Church of the Living God in 1982, where he served as pastor, with his wife, Minister Clifford B. Livingston, until he was appointed interim bishop of the local diocese.

Lawrence Livingston was told as a child he would be a preacher.

“My grandmother died when I was 4, and my dad lifted up me to touch her face, and there was a spiritual effect,” he said. “That really impacted me significantly.

“I started preaching at funerals we held as children for the cats and dogs and birds that died,” Livingston said.

His father died when Livingston was 12 years old and his mother moved the family from Greenville, Fla. to Manatee County to be closer to relatives.

Livingston was raised in the African Methodist-Episcopal Church, but when he was 17 he attended a tent revival.

“Leroy Jenkins came to town and he set up a tent on 15 [sic] Street (in Bradenton), and he was preaching the doctrine of Pentecostal that I had not been familiar with,” he said. “When I heard that message I quit smoking, I quit drinking and I quit my girlfriend.

“Then I was led to the Pentecostal church and I got my fullness,” Livingston said.

“I found the First Born church was teaching the same thing about being spirit filled,” he said. “And I’ve been here ever since.”

When Livingston was around 13 years old he was paralyzed with meningitis.

His illness as a child eventually led him into nursing as a career.

Livingston graduated Lincoln Memorial High School in 1961 and started Manatee Junior College, now State College of Florida, in 1968 and graduated in 1971 as a registered nurse.

He retired after 32 years at Manatee Memorial Hospital as the nurse manager on the overnight shift.

During 25 of those 32 years Livingston also served as pastor of three churches while he was working full time.

He was ordained as a deacon of the church soon after becoming a member in 1969, and in 1971 he was appointed to his first church as pastor in Bowling Green.

“My wife Clifford and I served as pastor in Bowling Green from 1971 to 1976,” Livingston, 75, said. “Then we were in Bartow for six years and then God sent me here (to Eternity Temple), and this is the 37th year of this church (in Palmetto).”

“With my interest in helping the sick I asked the pastor if I could visit the sick,” Livingston said.

When Livingston was visiting one church member, Addy May Brooks, he was going toward the bedroom and he saw “a cute lady in the kitchen,” he said.

Then he saw her again while he was working in the hospital emergency room.

He did the paperwork to have her admitted to the hospital and said he would bring her flowers that were left in other patient’s rooms after they were discharged.

“We have been married for 54 years,” Livingston said.

During his years in the church Livingston served as president of the seminary school in Waycross, Ga., for five years; was pastor at three churches; started a church in Saudi Arabia; preached in Uganda, Africa; and served as international missionary, a post that directs all the missionary programs of the First Born Church of the Living God.

He recently was appointed interim bishop of the diocese, but in 2021 Livingston will run for the office of bishop.

For more information about Eternity Temple First Born Church of the Living God visit its website at www.eternitytemplefbc.org/index.html.

To learn more about the First Born Church of the Living God go to its website at www.thefirstbornchurchinc.org/home-page.html.