Bragging rights at stake when Lennard, Riverview meet this Friday

The Lennard Longhorns cruised to a 36-0 victory over a depleted 0-8 Haines City Hornets’ team last Friday night in Polk County. Coach Matt Kitchie’s squad is now 6-2 heading into the Friday, Oct. 25, clash at Riverview with the rival Sharks, also having a good year at 7-2. The neighboring high schools are both coming off wins last Friday. 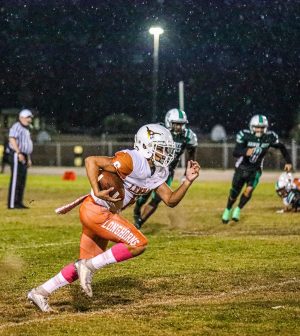 Photos by RICH & COMPANY FLORIDA
Senior Jacob Martinez caught 4 passes for 63 yards. The rain continued through the game and can be seen in these photos.

Riverview came back to squeak by Ridge Community 20-18, and Lennard easily handled Haines City 36-0 to notch its third straight win. Both Kitchie and Riverview’s Coach Mosel are enjoying their best records career-wise at their respective high schools.

The Longhorns dominated the host Haines City team, which plays with a short bench. Kitchie went to his backups early and often as the game was never in doubt. Players of the game selected for Lennard were: #7 Xavier Mitchell, Overall; #75 Hayden Gondelman, Offense; #24 Darius Frazie, Defense; #49 Matthew Greenaker Special Teams.

Eleven different ball carriers toted the pigskin for the Longhorns, with workhorse Tino Hunt relaxing most of the night on the sidelines after carrying four times for 21 yards. Horns’ Armani Simpson and junior Quay Smith picked up most of the load as Smith ended the night with nine carries for 71 yards and two TDs. Smith’s biggest chunk run of the night was for 24 yards. Simpson scored a TD and ran 14 times for 70 yards. Big Tanner Evans even got in on the rushing act by scoring a TD on a 25-yard rush for his only carry. Ricky Jackson Jr. ran once for 38 yards and two-way senior Davian Papius picked up 24 yards on two runs. 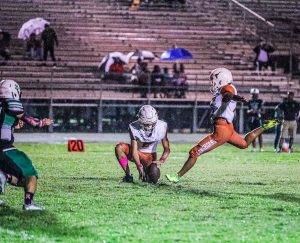 Jocelyn Diaz hit four out of five extra points in the downpour against Haines City.

Lennard also rediscovered its aerial game against the floundering Hornets. Sophomore QB Gavin Henley hit eight of 12 pass attempts for 86 yards and one TD with a lone interception. His longest toss was a 27-yard gainer to senior Jacob Martinez who caught 4 for 63 yards. Henley’s scoring toss went to Ricky Jackson for one yard. Junior Dax Corr also grabbed two passes for 10 yards.

Defense was a total team effort all game long as a bevy of Longhorns made tackle after tackle to negate any offensive momentum for the Hornets. Senior Josiah Davis Jr. and Kourtland Mitchell were in on seven and six tackles. Lennard interceptions were registered by Xavier Mitchell, Justin Dixon and Darius Frazier.

The scoring parade was led by Smith’s two TDs, and one each by Simpson, Jackson and Evans. Lennard sophomore #44 Jacob Teese nabbed a Hornet in his own end zone for a safety and two points. Senior Jocelyn Diaz hit four of five extra points to round out the scoring for Lennard. 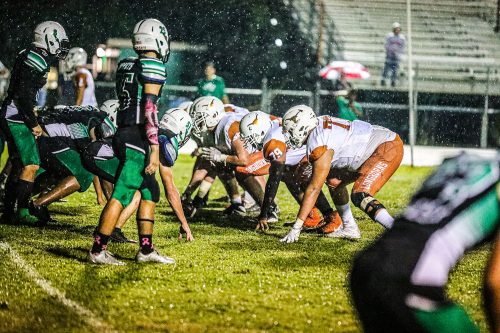 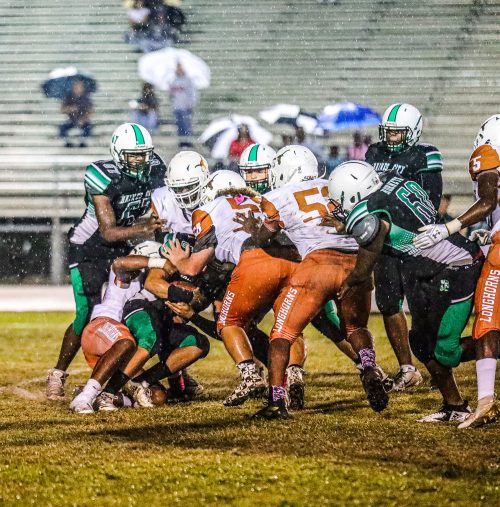