It’s official: The name for the new school set to open at the border of Balm and Riverview is Jule F. Sumner High, named for the ancestor of a family that has deep-seated south county roots. 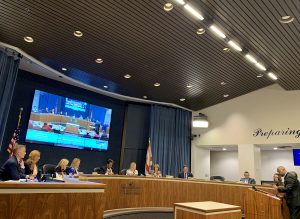 LINDA CHION KENNEY PHOTOS
After the Jule F. Sumner High School vote Oct. 15 at the Raymond O. Shelton Administrative Center in Tampa, gathering in the lobby, from left, Sharon Morris, Area 5 superintendent; Amy Evangelista and her mother, Susan Pisciotta; and Dave Brown, charter principal of Sumner High. Pisciotta is holding a photo of her father, Jack Rice. She and her daughter said they were happy with the Sumner name, after recommending the school be named posthumously for Rice, a 40-year educator, who taught and coached at East Bay High.

“If they couldn’t pick my dad, they picked a great name to go there,” said Susan Pisciotta, who at the school board meeting Oct. 15 asked that the high school at 10650 Balm Road be name posthumously for her father, Jack Rice, a 40-year educator who taught and coached at East Bay High. “What we were concerned about is that the school be named for somebody in south county, who knows south county.”

After the school board meeting ended, charter principal Dave Brown said his next order of business is to choose school colors and a mascot, suggestions for which he will bring before the board at its Nov. 19 meeting, starting at 4 p.m.

He said to get their ideas, he will be meeting with students at Sumner’s feeder schools: Barrington, Eisenhower and Shields middle schools, and East Bay and Lennard high schools.

Brown said he was eager as well to begin working with Deanna Fisher, who at the Oct. 15 school board meeting was named assistant principal for curriculum at Sumner High.

Fisher, who then worked at Spoto High in Riverview, was the district’s 2018 Assistant Principal of the Year. An East Bay graduate, Fisher worked also at East Bay and the South County Career Center, and most recently as the lead teacher for the Collegiate Academy at Lennard High, according to Area 5 Superintendent Sharon Morris. Area 5 includes Bloomingdale, Durant, East Bay, Lennard, Newsome, Plant City, Riverview and Strawberry Crest high schools.

The list was long for suggested names for Sumner High, on the north side of C.R. 672 (Balm Road), east of U.S. 301. The school is set to relieve both Wimauma’s East Bay High and Ruskin’s Lennard High, which are at- or over-capacity.

According to Harrison Peters, chief of schools, more than 1,600 names were recommended, including suggestions received via email and at community meetings hosted at East Bay and Lennard, led by Brown. 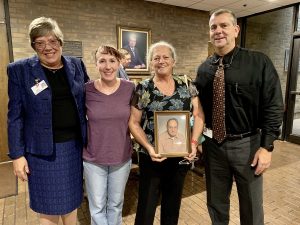 School board member Melissa Snively pushed for Sumner High, based on what she called “a strong recommendation from the residents of the Balm community.”

“Jule Sumner was a pioneer and entrepreneur who settled in the Balm area in the early 1900s, eventually purchasing 15,000 acres of land,” Snively said, in her prepared remarks to the board. “He was well-known as a cattle rancher and surveyor and was highly regarded as a businessman in his community.”

Calling Sumner “a rock who brought stability to the region,” Snively noted that during the Great Depression, Sumner would buy property “before the bank could take it from families, so he could then offer it back to the families when they were able to buy it, keeping the property in their heritage.”

According to Snively, descendants of the seven-generation family continue to own and operate the Sumner Cattle Company, not far from the new school, and that as a conservationist Sumner gave up many acres “to protect the environment rather than selling it to developers.”

Snively acknowledged the popularity of using “South Shore” in the new school’s name, including a suggestion to call it “Sumner South Shore High School,” which she lobbied against.

“The people in the Balm community do not consider themselves part of the South Shore area,” Snively said. Moreover, she added, “many more schools” will be needed in the South Shore area, “probably a dozen in the next 10 years or so,” so she asked “to defer that name to another school in the future.”

In the meantime, charter principal Brown said he will be busy in the weeks and months ahead preparing the $75 million, two-story, multi-building, 238,268-square-foot school campus for its August 2020 opening.

Built to accommodate some 2,900 students, the school is set to open with grades nine to 11, with an additional 450 sixth-graders by choice, to help relieve overcrowding at Beth Shields Middle School in Ruskin. Those students will be allowed to attend grades seven and eight at Sumner High as well. According to county policy, new high schools open their first year without a grade 12, to allow for students to graduate in their current schools.