Call it the “Riverview Entertainment District,” at home in Gibsonton, where new businesses are taking root around the Riverview 14 GDX multiplex, including the newly opened Four Stacks Brewing Company and the upcoming Cracker Barrel Old Country Store, the restaurant chain’s 60th Florida location. 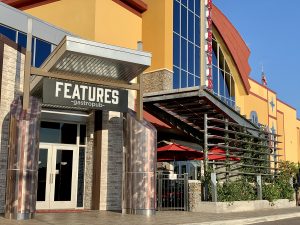 The Features gastropub is inside the Goodrich Quality Theaters Riverview 14 GDX multiplex, serving handcrafted drinks and entrees made in a scratch kitchen.

The 124-room hotel is nestled between the first Florida location for Goodrich Quality Theatres (GQT), which opened in March 2017, and the still-developing retail strip that includes Four Stacks and the recently opened Dollar Tree and NY Nails.

Rounding out the offerings are Dunkin’ Donuts and Baskin-Robbins, T-Mobile and Zaxby’s, “a fan favorite for chicken fingers, wings and salads.” These establishments opened in 2017, the same year Features opened inside the multiplex, a gastropub offering handcrafted drinks and entrees prepared in a scratch kitchen. 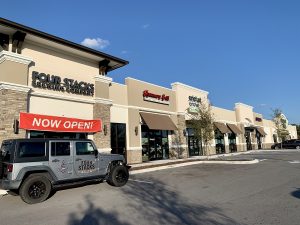 Tying it all together is the Strathmore Real Estate Group, developer of the 30-acre tract near U.S. Highway 41, U.S. Highway 301 and Interstate 75. According to Terry Benton, Strathmore’s vice president of real estate, four lots remain for development with new business announcements coming soon.

Strathmore officials believed in the viability of the location from the start, with its nearby interchange access and across-the-street proximity to the Gibsonton Walmart supercenter, at 9205 Gibsonton Drive.

“We saw the vision of the Gibstonton-Riverview market in 2007, and we hung in there through the bottom of the market,” Benton said. “Once the Great Recession began to pass, we recognized that this market really needed entertainment. That’s why we put the deal together with the good folks at Goodrich Quality Theaters.”

In turn, Riverview 14 GDX has broken records for GQT, a chain of 31 movie theaters, headquartered in Grand Rapids, Michigan. “It’s the number one location in the entire chain,” Benton said, “and it’s constantly rated in the top 10 for sales in the entire state of Florida for all movie theatres in the state.” 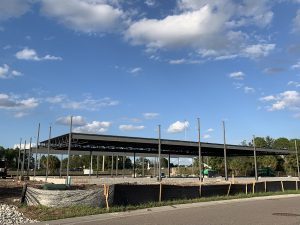 The recently erected steel structure for the Cracker Barrel Old Country Store set to open in Gibsonton in the first quarter of 2020. The 176-seat restaurant, including outdoor porch, is adjacent to the Goodrich Quality Theaters Riverview 14 GDX multiplex at 9390 Theater Drive.

The draw is far-reaching, thanks to the 9390 Theater Drive, Gibsonton, address, which puts the multiplex-anchored development one-tenth of a mile west of the I-75 Gibsonton-Riverview exit.

The Strathmore development “is in the path of growth, and it’s easy and convenient to get to, right off the interchange,” Benton said, noting the daily traffic count of more than 147,000 vehicles. He noted also the area’s growing stature nationwide, bolstered by Riverview’s 33rd-place showing in Money magazine’s top 100 list of “Best Places to Live” in 2019.

Moreover, the businesses themselves have their own unique selling points. For example, Riverview is the second location for the four-year-old Four Stacks Brewing Company, which launched in Apollo Beach under owner and CEO Nathan Hangen. Four Stacks features local, regional and house-brewed beers and Wednesday night is trivia night at the Riverview location, where food can be ordered in from some neighboring establishments, Benton said.

Extended Stay is designed to benefit from “the latest in air-exchange technology to constantly refresh the guestroom and hotel with fresh air.” 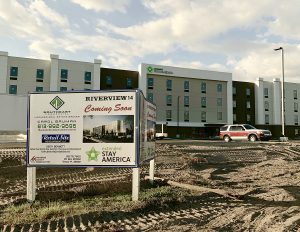 And the steel structure went up Oct. 11 for the 10,485- square-foot Cracker Barrel (including front porch), which is designed to seat 176 guests. Company officials say they plan to hire more than 175 full- and part-time employees. Benton said the restaurant and store are set to open in the first quarter of 2020.

Strathmore owns the upcoming Flex Suites Business Center, built to accommodate 20 offices in the fast-growing co-work market. While Strathmore will use some of the spaces, others will be open to the public for leasing, starting with the $950 per month base package, including 24/7 access, all utilities and a common kitchen and hospitality space. Moreover, three conference rooms will be available to the public to rent by the hour, when not in use by the tenants themselves, Benton said. Likewise, a day office can be reserved to fill special needs, as when a business has an out-of-state employee coming to the area to work. 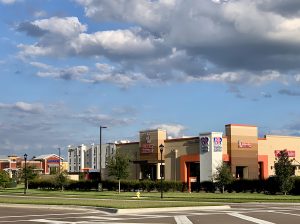 Also in residence at the so-called Riverview Entertainment District, Zaxby’s, T-Mobile, and Dunkin’ Donuts and Baskin-Robbins. Theses businesses opened in 2017, shortly after the grand opening of the Goodrich Quality Theaters Riverview 14 GDX multiplex.

All in all, calling it the “Riverview Entertainment District” seems to be “a good way to put it,” said Hillsborough County Commissioner Stacy White. “Gibsonton,” he added, “is a great community with a lot of potential.”

As for the possibility of another Strathmore development in south Hillsborough County, stay posted. “I can’t announce it yet,” Benton said, but “we’re working on a few more things in the South Shore market.”