The Little Manatee River is getting a lot of love from local officials who want to safeguard “the special character” of the free-flowing river and its immediate environment, prompting one congressman to push for federal aid. 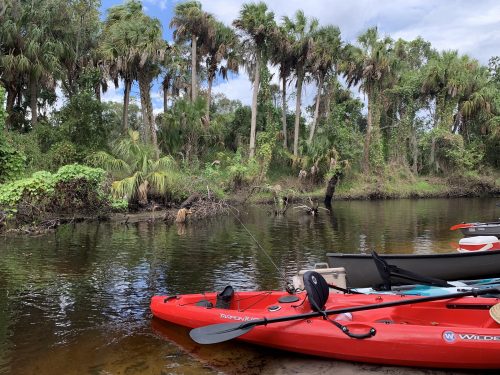 Hillsborough County and Manatee County commissioners have unanimously approved respective resolutions that call for the designation of the Little Manatee River, including appropriate tributaries other than the South Fork, as a component or potential component of the Wild and Scenic Rivers System.

Hillsborough County Commissioner Stacy White said he worked to get both resolutions passed after U.S. Rep. Vern Buchanan said unanimous votes from both parties would prompt him to action. Upon learning of the resolutions adopted this summer, Buchanan’s staff sent a confirming response this month on behalf of the congressman from Sarasota.

Already designated an Outstanding Florida Water, Little Manatee River would become one of only three Florida rivers to have federal wild and scenic status, along with Loxahatchee River (near the southeast coast) and Wekiva River (north of Orlando). 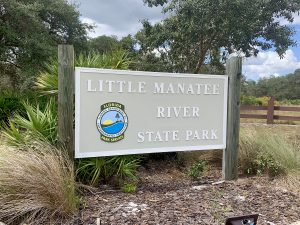 “It’s somewhat rare for an urbanized county like Hillsborough County to have such an ecologically pristine and scenic river,” said White, whose Riverview-area district runs from Lakeland through Wimauma. “It would be a real feather in our cap to get this [federal] designation and certainly a draw for ecotourism.”

According to the National Wild and Scenic Rivers System, Florida has approximately 25,949 miles of river, of which 49.2 miles are designated as wild and scenic, which accounts for about one-fifth of 1 percent of the state’s river miles.

Nationwide, as of August 2018, the national system protects 13,413 miles of 226 rivers in 41 states and Puerto Rico, representing less than one-quarter of 1 percent of America’s rivers.

“We really have a rare gem in the Little Manatee River,” White said. “I spent a lot of time on that river as a child, canoeing upstream and motorboat fishing downstream toward the mouth. I know firsthand what a treasure it is.”

With federal designation comes a comprehensive management plan and possible federal funding to protect conservation land along the Little Manatee River, White added, noting such land has already been identified under the county’s Environmental Lands Acquisition and Protection Program (ELAPP). 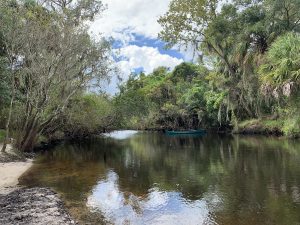 LINDA CHION KENNEY PHOTOS
“We really have a rare gem in the Little Manatee River,” said Hillsborough County Commissioner Stacy White of the Little Manatee River; White is pushing for its federal designation as a Wild and Scenic River. The blackwater river is already an Outstanding Florida Water, a designation that calls for special protection because of a river’s natural attributes.

Mary Duncan, president of the 250-member Sun City Center Audubon Club, wrote a letter in support of both the Hillsborough and Manatee county resolutions.

“As Florida grows and becomes more congested with housing, commerce and roads, it is vital that we preserve what we can of the natural beauty that has made Florida special,” Duncan said. She noted opportunities to hike, canoe and kayak along the Little Manatee River, as well as “the opportunity to see the birds, wildlife and native plants that abound along the river.”

While the overwhelming majority of the river runs through Hillsborough County, White said it dips as well into Manatee County. Environmental scientist Lindsay Cross spoke in favor of the resolution at a Manatee County Commission meeting in July. Coming off a 14-year tenure with the Tampa Bay Estuary Program, Cross is government relations director for Florida Conservation Voters (FCV), a nonprofit focused on environmental policy.

“Little Manatee River is one of the most beautiful, pristine, and outstanding parts of Tampa Bay, and I’ve spent countless hours paddling its meandering waters,” Cross said, in a July 26 post published by FCV. “It is teeming with wildlife, and I am always amazed at the quality of the water, especially in a state with a rapidly growing population.” 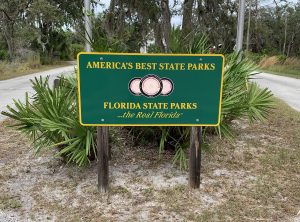 Another entrance sign speaks to the virtues of the Little Manatee River State Park in Wimauma, where natives and newcomers alike get a year-round taste of “the Real Florida.”

Recognizing the “value of a clean and healthy bay and ecosystem,” Cross said there are multiple benefits of working to preserve Little Manatee River. “Protecting and properly managing our natural resources support our economy, provide valuable recreational opportunities and improve real estate values,” Cross said. Such a “smart economical move,” she added, “will continue to pay off as our grandchildren will be able to enjoy the natural beauty and quality of life that we have worked to protect for them.”

Beginning in a swampy area in southeastern Hillsborough County, the Little Manatee River flows about 40 miles before emptying into Tampa Bay. Approximately 5 miles of the river flow through Little Manatee River State Park, where campsites can be reserved year-round and a new bathhouse is under construction. Park activities include picnicking, hiking, canoeing, horse trails and camping. The park is off U.S. 301 at 215 Lightfoot Road, Wimauma.