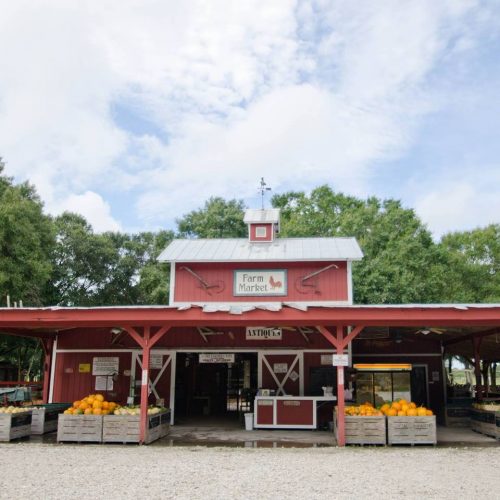 Hunsader Farms got its start in 1967 when three Hunsader brothers left their Wisconsin dairy farm to try their hands at growing vegetables in the sunny south. The brothers cleared the land by hand and planted their first crop of 80 acres of tomatoes in the fall of 1967. The operation prospered and grew and in 1990 was handed down to their sons who gave it the name Hunsader Farms.

Through the years it has added many events and activities in an effort to share with the community a little piece of its farming heritage. In 1990 it built the barn style Farm Market, then added the petting zoo in 1991. In 1992 it kicked off its first Pumpkin Festival, while the summer of 1995 was spent building a playground and picnic area for families. The year 1997 brought the construction of its modern-day outhouse. In 2002 it built its craft and antique store, The Farmer’s Wife, and in 2005 turned it into an ice cream and gift shop. In 2013 it opened its antiques barn. The old town was added in 2014.

Hunsader Farms hopes you come visit and catch a glimpse of days past when life was a little slower, a little sweeterand a lot simpler.

The 28th annual Pumpkin Festival is each Saturday and Sunday from Oct. 12 through Oct. 27.