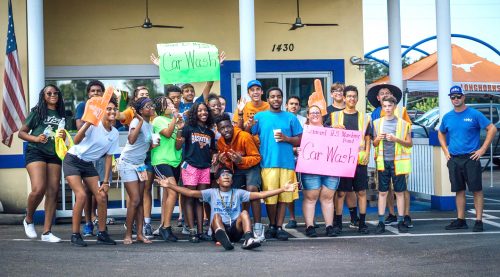 Blocking and tackling, running for touchdowns, kicking extra points: These are all exciting moments of Friday nights under the lights. But fans turn out for football games in Ruskin at the Lennard stadium not only for the spectacle of high school football by the orange and white but for the fun and entertainment surrounding the game, including the cheerleaders, socializing, tasty food being sold, and, of course, the pre-game, halftime and during-the-game music of the Longhorns’ band, presented under the direction and coordination of the Lennard High School Music Department. 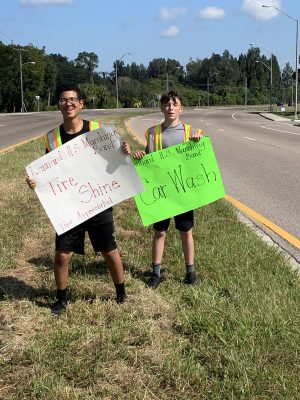 Similar to many activities at the high schools, expenses for the music department and the performing band often exceed the amount available from the school administration. That means fundraising is a necessary option for equipment, travel and participation in competitions. The fundraising is also a necessity this fall due to the need for a new drum major podium, an instrument cart, and props for the marching competitions that start in mid-October.

Responding to these needs, 33 students from the music department at Lennard dragged themselves out of bed bright and early Saturday, Sept. 28. The weekend wake-up call was not for music or marching practice but for fundraising in a car wash at In & Out Car Wash Express, owned by Robert and Martin Phelps, at 1430 U.S. 41 in Ruskin.

According to Music & Band Booster Club committee chair Robin Platzer, the car-wash fundraiser was a huge success with the kids receiving close to $800 in donations for their efforts and In & Out’s pledging an additional $1 per car, bringing the day’s proceeds to almost $1,100.

Platzer said,“Last year during show season the band suffered the loss of a show prop. It was a wooden clock that had been handmade by the father of a student because funding couldn’t support a commercial grade prop, and that clock was to be the main component of the band’s show called “Ticking Away.” Sadly, the first time the kids rolled the new prop out onto the field during a practice, it fell apart. And while other marching bands were wheeling out these huge commercial props and putting on shows that looked like they belonged on Broadway, our kids were marching around something invisible. It was heartbreaking.”

Platzer added, “I can only imagine the defeat these kids felt before they even hit the field. I don’t want them to face that kind of defeat again because they don’t have a safe drum major podium to stand on or a cart to wheel out instruments, some so heavy it takes seven kids to move them. 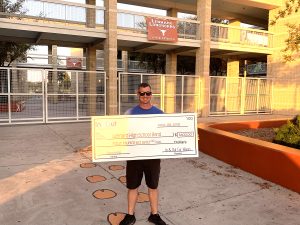 In & Out Express Car Wash donated $1 for every car washed at the fundraiser, for a total of $400.

“So, we decided to reach out to some local businesses and see who could help. In & Out Car Wash was the first to step up and offer a helping hand,” she said happily.

“This was a first for us also,” said Robert Phelps of In & Out. “But after talking with Ms. Platzer and hearing how short funded the music program was at the school, we absolutely had to pitch in. I mean this is our community, and our community serves us every time they drive through our car wash. So we absolutely want to return the favor by giving something back, especially if its for kids.”

The community responded in kind. What normally would be a self-service car wash turned into a full-service car wash for a day. Thirty-three kids took turns holding signs by the roadside, wiping down cars, and shining tires for tips.

“We are super grateful,” said Platzer. “This event got us a lot closer to our goal of $4,500 which is the cost of the stand and cart combined. With school funds not capable of covering all that is needed for these programs, we need all the help we can get from boosters, sponsorships and our community to make up the rest. These kids are warriors in polyester when they hit that field. They are a team. They are amazing. They deserve a fighting chance this year.” 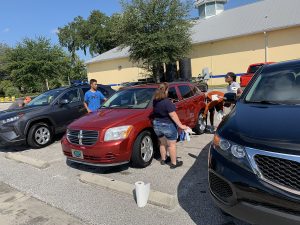 Platzer added: “If you would like to help the Lennard Marching Band members reach their goal so they compete safely, checks can be made payable to LHS Music Boosters Association and mailed or dropped off to Lennard High School, 2342 Shell Point Road E, Ruskin, FL 33570 in care of the Music Dept.”

Anyone can also make a donation online by going to www.paypal.me/lennardmusicdonate. You do not need a PayPal account to participate. Donations are tax deductible. All donors who give $50 or more will receive a photo of the entire marching band as a thank you. So, be sure to include your name and mailing address. Businesses interested in sponsorsing or teaming up for events can reach out to lennardbandboosters@gmail.com, attention Robin.